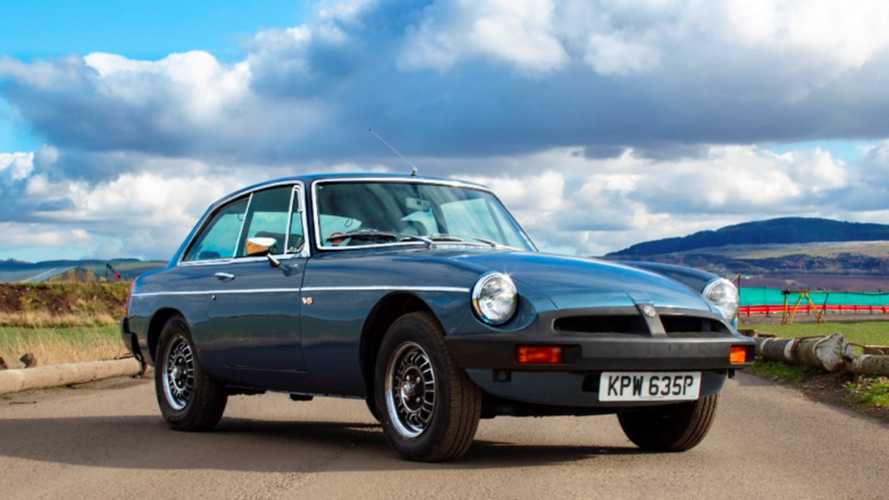 An avid collector of classic MG sports cars has chosen Scotland’s foremost auction house to sell four specimens from his garage. Morris Leslie will hammer away a 1960 MG A, 1975 MG B GT V8, a 1952 MG TD Midget and a 2002 MG TF on May 25th.

Highly sought after and rarely found in such healthy condition, the offered 1960 MG A MKII Roadster radiates a resplendent red, powered by Abingdon’s upgraded 1588cc engine. Although more than 31,000 examples were crafted in the MG factory during three years of manufacture, only 1800 are believed to have survived in roadworthy condition.

The modest estimate range for the MG A (£18k – £22k) will easily find the historic sports car a forever home; the model boasting of an enthusiastic owner following. The same story applies to the MG B V8, as this is a genuine factory car and not a replica.

Housing the ubiquitous aluminium 3.5-liter Rover V8 and producing 137bhp at 5000rpm, the MG B GT V8 may sound lacklustre on paper, but thanks to a significant torque curve and (by virtue of an aluminium cylinder block) lighter engine over the six-cylinder ‘widow making’ MGC, 60mph can be breached from a standstill in 7.7 seconds. Top speed is quoted as beyond the 125mph barrier.

Built for only three production years, few legitimate factory B GT V8s are known to have survived. The same cannot be said for the MMG TD/TF, with lashings of examples out there. Yet, few boast the credentials of this 1952 TD Midget.

Having resided with the same owner for almost quarter of a century, chassis number TD23507 is presented with a hefty document folder recording the vehicle’s history. Originally supplied to a dealership in Lancashire during December of 1952, the MG’s original drivetrain performs without protest.

For those of a modern classic persuasion, the offered 2002 MG TF should tick all the boxes. Purchased by the current vendor in 2013, this early TF model benefits from a hard top roof (perfect for the British summer) and a plethora of servicing invoices. With barely 50,000 miles on the odometer, this one should be good to immediately hit the road in search of alfresco thrills.

Further featured lots from the roster include a 1975 Ford Escort MkI, 1988 Ford Sierra RS Cosworth, 2003 BMW 530I Sport Aegean Edit and various Jaguars. Morris Leslie’s classic sale takes place on May 25th in Errol, Perthshire. You can view more on the auction here.

The MGs You Remember Are Now An Endangered Species

British With A Dash Of Muscle: Oldsmobile V8 MGB GT For Sale