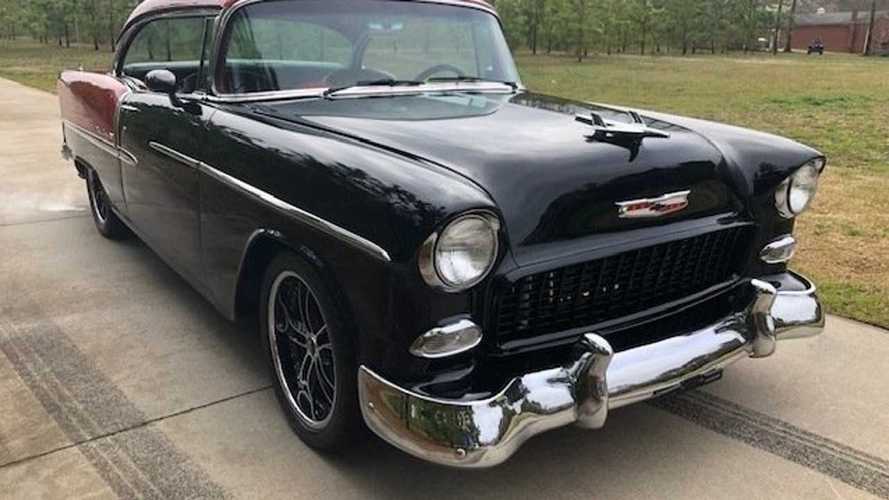 This 1955 Chevrolet Bel Air perfectly combines the classic old-school looks with the new-school drivetrain and luxury features inside the cabin.

The 1955 Chevrolet was considered to be a huge turning point for the bowtie brand and was a major sales success. The '55 Chevy was available in three variants: the 150, 210, and Bel Air. Chevy only manufactured this car from 1954 to 1955, but in that one-year production run, the vehicle was available as a two-door coupe, hardtop, convertible, station wagon, sedan delivery, a four-door sedan, and a station wagon. The '55 Chevy was manufactured at plants in the United States, Canada, and Australia.

Under the hood, the '55 Chevy was powered either by a 235 cubic-inch OHV inline-six cylinder engine with 135-horsepower or a 265 cubic-inch OHV V8 which either produced 162-hp in standard tune, 180-hp as a "power pack" engine, and 195-hp as a "super power pack" engine. Depending on the engine choice, the Chevy came equipped with either a three-speed synchromesh manual, a three-speed synchromesh manual with overdrive, or a two-speed Powerglide automatic transmission.

This particular 1955 Chevrolet Bel Air currently up for auction at Greensboro Auto Auction in Greensboro, North Carolina is a tastefully built Pro Touring/ Resto Rod machine. Under the hood, this beast is powered by a 5.7-liter LS V8 engine with an LS6 intake. The engine sends power to the rear wheels via a new 700R4 automatic transmission with overdrive built by Bowtie.

This black and red Bel Air comes to a stop thanks to Wilwood braking system which features slotted and drilled rotors on both axles with six-piston calipers up front and four-piston calipers at the rear.

So, if you wanted to own a retro automobile which perfectly combines the classic old-school looks with the new-school drivetrain and luxury features, then check out and bid on this 1955 Chevrolet Bel Air Pro Touring/ Retro Rod at Greensboro Auto Auction.