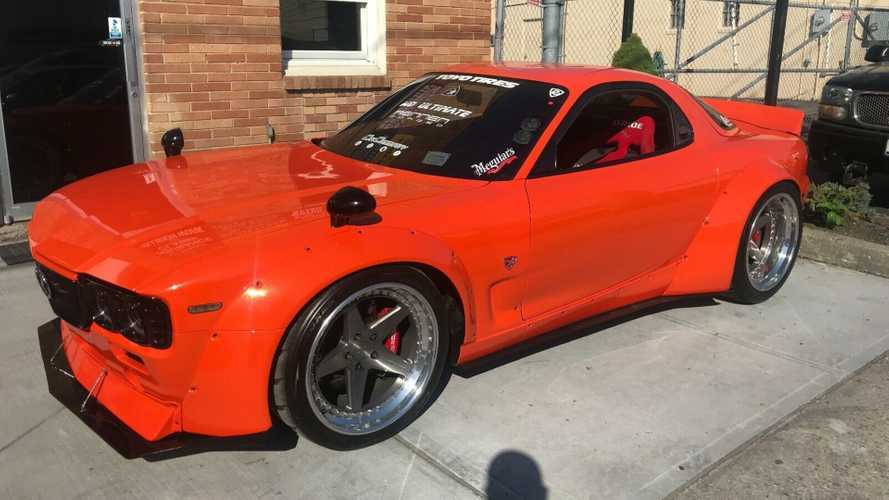 What happens if you take an FD Mazda RX-7, tune it to supercar levels of performance, and add a hint of muscle car styling? Take a look...

The final generation of Mazda RX-7 is as sacred to fans of Japanese cars as holy scripture. These rotary engined FD cars were the ultimate evolution of the marque’s cult classics sports car. It’s not unusual to find highly modified examples of the RX-7, but we’re willing to bet you’ve never seen one like this. Listed on Ebay is this SEMA-built Mazda RX-7 that adds some muscle car flair to the import scene.

Sporting a Greddy Rocket Bunny bodykit, the once rounded RX-7 now features a blunt nose, swollen wheel arches, and a sizeable trunk spoiler. A set of Rotiform Forged KPS alloy wheels in matte black contrasts the extreme orange bodywork, with each wrapped in a sticky Toyo Proxes R88R tire. Greddy coilover suspension hunkers the car low to completes the visual transformation. The design certainly has a hint of Camaro to it, don’t you think?

The interior retains much of its original RX-7 architecture, but is now dominated by a pair of Bride Low Max Stradia II carbon kevlar bucket seats. The original steering wheel has been replaced by a Vertex 7 Star, while  a large touchscreen infotainment system adds some modern technology to the cabin.

It’s an imposing thing to look at, but this car has the performance to back up its polarizing looks. Underneath its broad hood is the RX-7’s rotary motor, but totally rebuilt by SpeedTek of New York. The add states that its full specification will be added soon, but we do know that it produces an incredible 800 wheel-horsepower! It has yet to be fully tuned for maximum performance as the car’s engine is still being run-in.

This 1994 Mazda RX-7 was displayed at the SEMA show twice, making its debut in 2016 for Toyo Tire Treadpass. It then was on display with Meguiares in 2017.

At the time of writing the car hasn’t met its reserve with the current bid being $26,200. Looking for something totally unique? This import/muscle car might be for you.