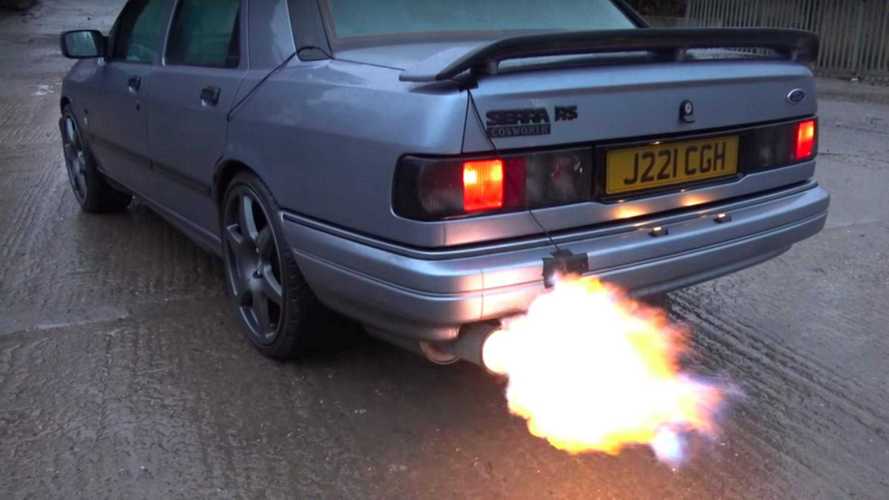 Ford and Cosworth first joined forces on the Sierra back in late 1986. Three decades later, none of that blistering power delivery has lost its charm

There’s nothing subtle about a Ford Sierra RS Cosworth. If a Sierra 'Cossy' turns up, you’ll certainly notice. With its controversial ‘jelly-mould’ profile, eye-catching body kit and characterful wails from the wastegate, Ford's steroid saloon will happily snare a nostalgic grin from almost all onlookers in the vicinity.

In a recent YouTube video, Monky London teamed up with Dave - proud owner of a Sierra Sapphire Cosworth boasting a long list of old school tuning modifications and the ability to spit fire from its large Mongoose exhaust in a way that can make grown-ups giggle like teenagers.

Dave was young when the ambition to own a Sierra RS Cosworth first took hold. His father had run a local Ford dealership when the car was considered the ‘iconic top model’ to have. Only certain dealerships, including his father’s, were allowed to sell the model as an RS license was required.

Many years later and Dave has fulfilled that very ambition with a 1991 Sapphire. Modified from 4-wheel to 2-wheel drive, this Sierra Sapphire carries a 200-block YB engine. Power delivery has been sharpened up to a remarkable 400hp and 400lb-ft torque thanks to forged internals and ported head. Transmission changes go through a solid Cosworth T5 gearbox, also used in the RS500.

Like a dream list of tuning parts, this Sierra enjoys use of an RS500 intercooler, Radtec radiator and that unashamed Mongoose exhaust at the rear. Thanks to a Turbo Technics T34 Hybrid Turbocharger, you can hear Dave’s Sierra suck in air as the revs climb before delivering an aggressive kick of acceleration at a staggering 32 psi. No matter how many times we hear it, we never tire of the sound of that hard-working wastegaste!

Inside, all eyes are immediately drawn to the white boost gauge located in the central console, the busiest readout in the whole car. Connelly hide leather adds unexpected luxury, completely counterbalanced by the basic winding mechanism for the sunroof, but it’s all part of the Sierra’s retro charm.

Taking the Sierra out on a typically wet British day, the Cosworth struggles for grip on its Nankang ditch finders, the back end wriggling around as power builds.

One of the video’s most amusing moments is when Dave has to temporarily admit all that specification is limited in the damp, confessing ‘I just got done by an MG!’. However, he perseveres with absolute focus in his eyes, working up through the gears before a small but satisfied smile appears.

Dave, and his Sierra Sapphire RS Cosworth are an inspiration, driving in just the way that Ford and Cosworth intended, and that’s why we can’t help but love this classic and how it still excites with its old school tuning.