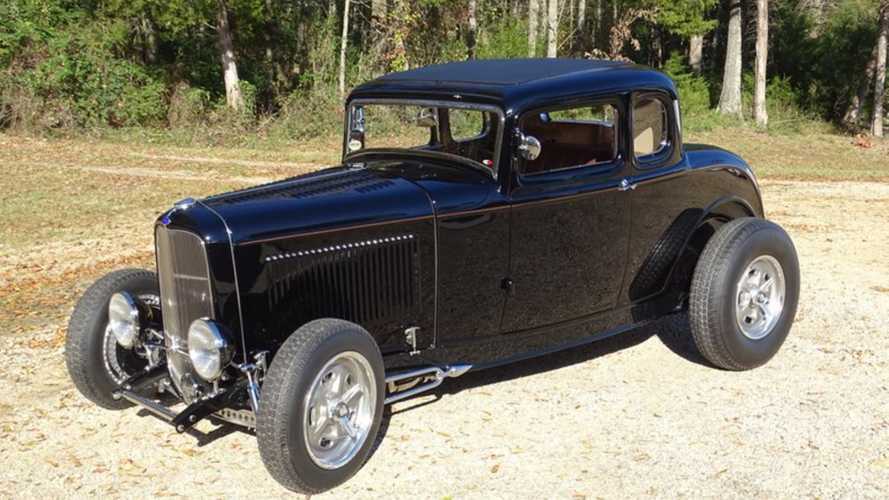 Featuring a one of three experimental engine, this expertly crafted hot rod is also an award winner

Hot rod builds are known for being unique, with no two being exactly the same. Their combination of vintage bodywork and muscular engines often form a fascinating story, much like this 1932 Ford 5 Window Coupé that features experimental prototype parts. It’s up for grabs at the Greensboro Auto Auction this weekend.

Under the hood of this car is an experimental 32-valve pushrod HEMI head prototype engine which uses a one-off intake manifold. These parts were produced by Ford for testing, and were actually meant to be destroyed after evaluation. Instead, they survived and now find a home on this immaculate power unit. The 302ci engine is attached to a Tremec TKO 600 transmission that sends power to the rear wheels.

However, it’s not just the engine that makes this car special, oh no. The 5 Window is said to be a genuine  ‘Henry Ford Steel Car’ meaning that there’s a lot of history packed into the modified machine. It's been chopped 2.5 inches at the front and 2.0 inches at the rear for that iconic hot rod look.

The interior was fabricated by Sid Chavers, well known for working with some of the best hot rod builders, and was his personal car for several years before being sold to its current owner. Sit inside the car and you'll find a leather bench seat and a cluster of aircraft-style gauges sat on a pearl effect dashboard, blurring the lines between aviation and art.

This 1932 Ford is also an award winner, claiming the Amber Award at the Vintage Color Studio Concord in California, and winning a ‘Top 25 Award’ at the 35th Annual Hot Rod Roundup in 2017.

It is an intriguing car built with a lot of attention to detail. This Ford, especially with its prototype engine, would take pride of place in any hot rod collection.