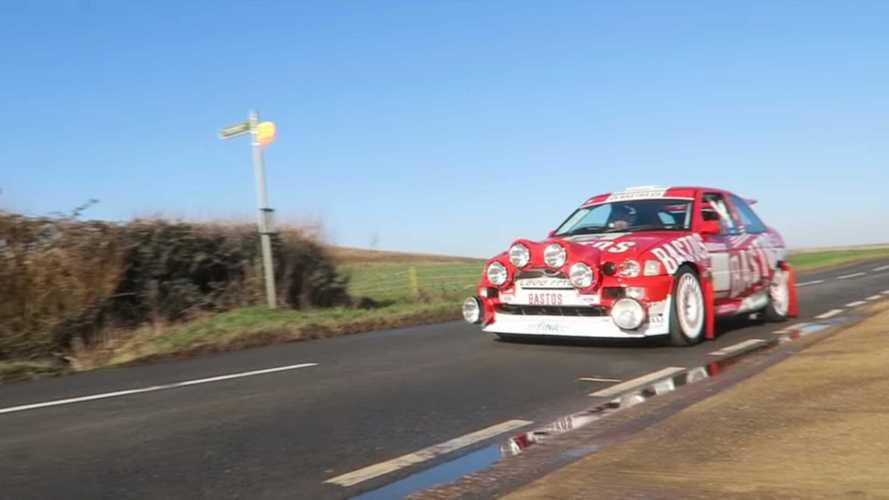 Ever met a car that is so loud you have to wear ear defenders to drive it? Well, watch this Ford Escort RS Cosworth Group A world rally car, a vehicle that won in the hands of rallying legends Carlos Sainz and Tommi Mäkinen in the World Rally Championship.

The exact car shown in Jamie_FYD’s YouTube video can’t put its name to any WRC victories, but has an even more interesting story as it was homemade. This DIY approach hasn’t led to an inferior product, with Jamie_FYD describing it as “everything you want it to be, it’s insanity with numberplates”.

Barely a blink of an eye goes between each gear when the Ford accelerates down country lanes in the video, and even without being in the car it provokes a proper ‘woah’ reaction. The insane acceleration is down to its 500-horsepower WRC-designed engine, coupled with a sequential F50 six-speed Ricardo gearbox.

That combination, and the two side exhausts, makes a lot of noise, but a silencer has been fitted to ensure it doesn’t exceed 100 decibels so it can be used on the roads.

“Although it’s loud, after having a meal you can just jump in this like a normal car. which says a lot about the craftmanship,” is another of Jamie_FYD’s comments, said between large grins and screams as the car’s owner John hits the accelerator.

There are no half-measures on this car, with a fully complying rollcage and other safety infrastructure, a nine-inch rear diff and slightly smaller front diff, rare Magnesium wheels, a full rally lighting rig, rof scoop ventilation and original whale tail rear spoiler.

As John uses the car more for hillclimbs than rallies, he’s given it a horsepower boost to help its (literal) upward trajectory.

The performance parts are all well and good, but there’s two particularly impressive aspects of the job John has done.

Ford Motorsport designed its rally cars not expecting the ‘Johns’ of this world to be building them still many years later, and therefore there is no supply of parts that a budding engineer could pick up and turn their Escort into a world rally car. The solution: getting custom carbon mould pieces, sourcing original Ford Motorsport parts (proven to be legitimate as each starts with a ‘909’ number of ‘MS’), and getting original or verified suppliers to build the moulds for ‘original’ new parts. And with the designs for those moulds now in existence, it means John has actually made it easier for anyone wanting to follow his footsteps.

This car was also converted into right-hand-drive, requiring a reworking of the front geometry. This involved moving the steering rack (while avoiding original engine mounts) and applying many strengthening pieces to reduce chassis flex and allow the car to run as low as possible on tarmac. According to John, Ford Motorsport said it couldn’t be done, but the end product has proven Ford wrong.

It’s a awe-inspiring car to look at, learn about and drive. We’ve very jealous.