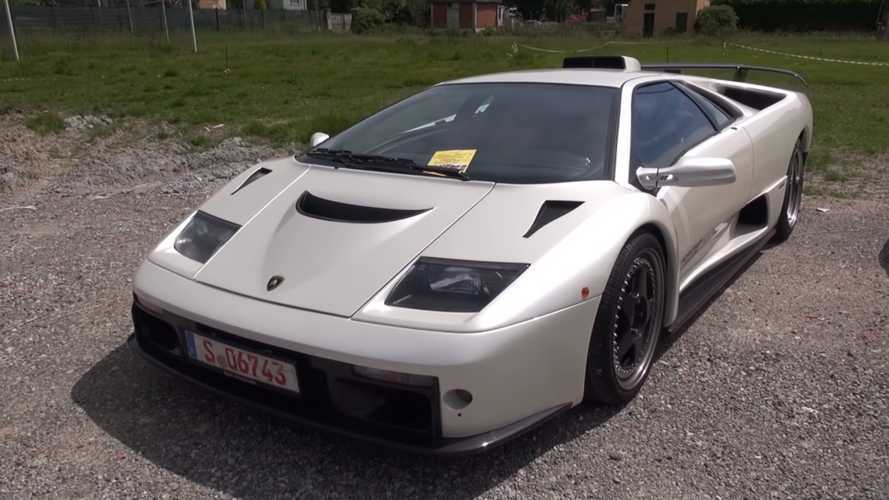 Just 80 Lamborghini Diablo GTs were ever built, but this video features two of the V12 beasts!

Do you want to see and hear six minutes of pure uninterrupted Lamborghini V12 action? The answer is obviously yes! YouTuber NM2255 Car HD Videos has put together a compilation video of Raging Bulls, including many of what some consider to be the last ‘real Lamborghini’.

When it came time for Lamborghini to replace its definitive pin-up supercar, the Countach was always going to be a tough act to follow. 16 years of that iconic wedge shape meant that its successor needed to be something special. With a 0-62mph sprint of 4.5 seconds, a top speed of 202mph, and the latest development of the Ranging Bull’s V12 engine, the Diablo didn’t disappoint.

The Lamborghini Diablo GT (enjoyed best if you turn the video to full volume) is a hardcore variant of what is already an extreme supercar. Firing up and revving its enlarged 6.0-liter V12 engine, this silver 1999 example is soon joined by an even more flamboyant orange GT. Roaring off into the distance, that 12-cylinder symphony is a beautiful reminder of why we love naturally aspirated cars.

The supercar can be visually distinguished from its lesser siblings by its Batmobile-inspired carbon fibre bodywork. A vast rear wing and diffuser dominate the rear end, while larger air intakes, roof snorkel, and additional ducts add to the distilled aggression it wears so well.

Mechanically GTs are endowed with a larger displacement V12 engine that produces 575 hp and 465lb ft of torque. 0-60mph was a fraction quicker at 4.4 seconds, but the car's top speed became an impressive 210mph.

Being sat inside the Diablo GT masks some of its roar, but you’re still exposed to bare carbon fiber, racing bucket seats with four-point harnesses, a GT steering wheel, and a five-speed manual gearbox.

Costing just shy of $300,000 when new, and not available in the US, Lamborghini only produced 80 Diablo GTs. Today these Lamborghinis can be officially imported thanks to America’s 25-year rule that allows cars of that age or older to be imported regardless of safety certification. Lamborghini Diablo GTs are certainly an appreciating asset with one selling for $815,000 at RM Sotheby’s Monaco auction in 2018.

There’s at least 13 classic Lambos (and one cool-looking traffic warden) in NM2255 Car HD Videos’s mini movie, each showing off the vocal range of their iconic V12 motors. Oh, and watch out for the opinion-splitting fluorescent pink Diablo!