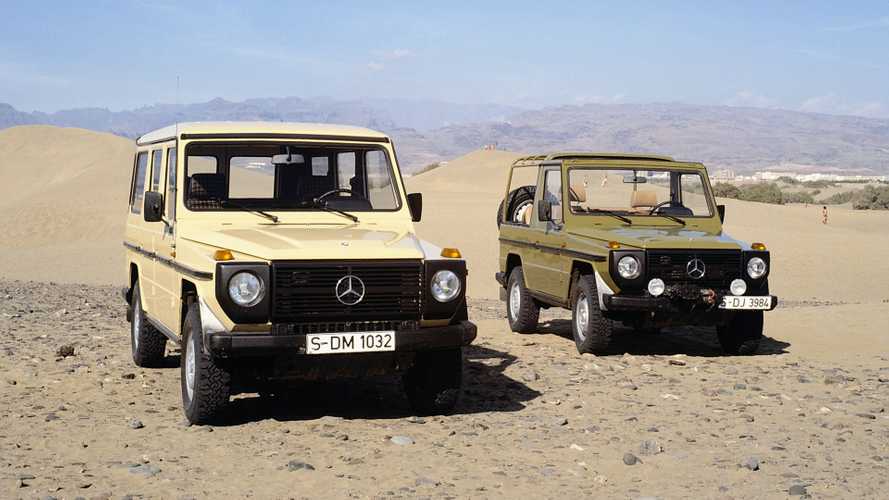 G-Wagens may be more popular in cities these days, but for 40 years they have been a staple of off-road automation

Way back in 1979, Mercedes-Benz took a risk and created the G-model, an off-road utility vehicle that was a far cry from anything else it made for consumers. It exceeded sales expectations, and is now selling its 40th birthday.

Initial targets for the car sat at 10,000 units per annum as a maximum, but Mercedes has found itself making double that, and the G-Class is now the longest continuously running model series for the brand, with the latest generation vehicle having been launched last year.

Obviously the original intention of the G-Wagen, as the first one was known, was to provide the engineering and interior nous of Mercedes into an off-road car. But to succeed in that, it had to be able to scale mountains, drive through muddy bogs and even operate in underground mines, something no other Mercedes vehicle had been designed to do.

As it proved itself on each of these challenges during development, the vehicle actually earned the name ‘H II’, a reference to the tough and undemanding Halfinger mountain horse, which had already graced another vehicle under the Daimler-Puch brand that some G-Wagens were to be sold under.

By the 1990s, significant development was going into areas other than off-road capability when it came to the G-Class. There were AMG-tuned variants, which still prove extremely popular today, luxury models, work to improve the efficiency of the engine and to produce less CO2, and eventually the introduction of a V12-powered model capable of 612-horsepower.

The time spent on these variants was made possible as Mercedes had hurdled most of the mechanical barriers prior. There were three differential locks on each vehicle by 1985, which was followed by permanent all-wheel drive. Last year the next great leap was made with the introduction of a front axle that had independently operating suspension.

And before any of those breakthroughs occurred, the G-Class was already being used as a trusted tool on difficult terrain by military and emergency operations, civilians and most impressively: rally drivers.

In 1983, Le Mans 24 Hours legend, multiple grand prix winner and European F2 champion Jacky Ickx drove a Mercedes-Benz 280 GE to victory in the Paris-Dakar Rally, considered one of the toughest motorsport events of them all. Even more incredibly, Ickx’s co-dirver was actor Claude Brasseur, godson of legendary writer Ernest Hemingway, a member of the French bobsleigh team in the 1960s and a knight of the country’s empire.

And that’s only just touching on the members of the aristocracy who have driven or owned Mercedes’s G-Class utility vehicles over the last 40 years...