Berliet T100: The Giant Of Rétromobile 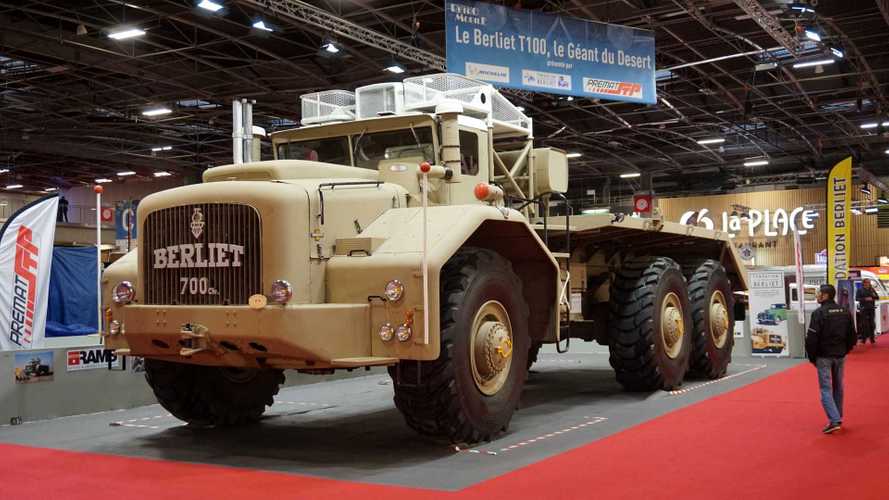 Did you spot this Berliet truck at Rétromobile. You should have, it's over four meters tall!

One of the curiosities of Rétromobile 2019, held from February 6-10 in Paris, was the Berliet T100. This mastodon is a French truck designed in 1957 by Marius Berliet, but produced under the stewardship of his son Paul. The idea for the truck came about after an invite from Shell to visit the Saharan desert oil deposits turned into an invitation to design a machine suitable for the dunes. The result was the largest truck in the world.

The T100 truck was capable of carrying 50 tonnes across the sands without getting bogged down, and was first presented at the ‘57 Paris Motor Show. At the same time as one sat on display, a second truck was at work in the desert, and eventually the show star would also join it.

There were two more lorries designed, one of which was a 6x4 and the other which was delivered to the United States, where Berliet hoped to make the vehicle widely used in oil fields. The 6x4 configuration proved to be a failure, as the load on the rear tires destroyed them far too fast.

On the other side of the Atlantic though, the US model was well received, particularly with its revised design for the country of Uncle Sam, but it was never bought by oil operators, meaning it did not meet its original purpose.

So what happened to the T100s? The first two went into disuse as the Algerians picked American suppliers for dune mobility, Berliet brought the fourth model back to Europe and destroyed it alongside the troublesome third model. That means there are two surviving, with one still somewhere in Algeria and the other based in France, hence its appearance at Rétromobile.

In total the truck weighs 103 tonnes, contains a 29-liter Cummns V12 engine capable of 700-horsepower and powered by 1900L of fuel, divided into two tanks of 950L each. The fourth truck was capable of 1000hp, but its resultant greed for fuel led to Berliet having it destroyed.