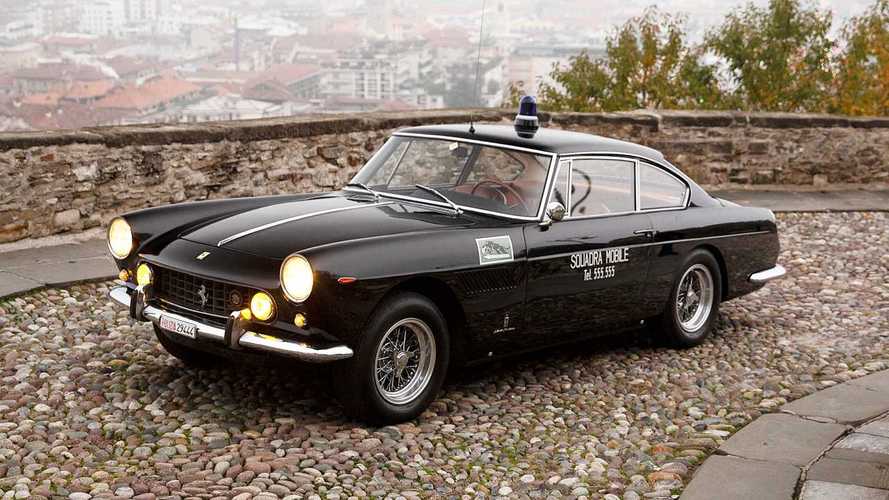 A relic from when the Italian fuzz drove Ferraris.

Regardless of where you live, today’s police cars generally take the form of boring family sedans, SUVs, or compact cars. But decades ago, Italy was the recipient of some truly special law enforcement machines, including this stellar 1962 Ferrari 250 GTE Polizia that’s now for sale.

Call 911 for the coolest Porsche police car ever

According to selling dealer Girardo & Co. (which also sourced these images), lots of Italy’s crime in the 1960s resulted in car chases. To keep up, many police moved from the Alfa Romeo 1900 to the sportier Giulia 1600, but even then, the zesty sedan occasionally ended up left in the dust. Enter Armando Spatafora, one of Italy’s most respected law enforcement officers.

As Girardo notes, Spatafora was one of just four policemen in the entire country to attend a high-performance driver training in Maranello, Ferrari’s home. Through the course of the program, Spatafora reportedly fell into a groove with the 250 GTE, a 2+2 grand tourer that boasted the legendary Ferrari Colombo V12 found in other vehicles like the race-winning 250 GTO and 250 GT California Spyder. From that trip to Maranello came Spatafora’s new ride, this 250 GTE Polizia.

A Series II vehicle, this Polizia carries chassis number 3999, delivered new in Maranello in November 1962. Its 3.0-liter V12 produced 240 horsepower (179 kilowatts), a number that was close to world-beating back then. Finished in black with a hard-wearing tan leatherette interior, this example wasn’t the only Polizia built by Ferrari – the second law enforcement GTE met its end just a few weeks after entering service, destroyed in the line of duty.

That leaves this particular example in the enviable statistical position of being the world’s rarest Ferrari (though it shared almost everything with the far more common GTEs of its time). Making it even more special is the unique “Squadra Mobile” door lettering and police-spec blue lights and siren, the only private car in all of Italy to be allowed special dispensation to use those features.

The police Ferrari remained in Spatafora’s service for six years, acquiring legendary status thanks in part to the officer’s driving skills in combination with the vehicle’s excellent performance. Official service sheets confirm the 250 Polizia regularly returned to Maranello for maintenance. Retired in 1968, the car remained in police possession until 1972, when a sympathetic new owner purchased it from a surplus auction. Alberto Cappelli owned it for the next 40 years, keeping it preserved and in good running condition.

In those years, the 250 GTE Polizia participated in driving tours and displays throughout Europe, including a race in 1984 that reunited it with Spatafora (where the elder statesman recorded the second-fastest time overall). The car did a stint in Rome’s Museum of Police Vehicles, and it made appearances at Ferrari’s 50th anniversary celebration in 1997 and the launch of the book Armando Spatafora: il Poliziotto con la Ferrari, a biographical record penned by the officer’s daughter Carmen.

Today, the 250 GTE is offered with pricing on request. Girardo claims it is ready to be enjoyed in its current “beautifully original condition.” It has been inspected by Ferrari Classiche, giving it provenance as a matching-numbers example between chassis, engine, transmission, and rear axle. Conventional GTEs in exceptional condition sell for around $500,000, but given this vehicle’s highly unique history, we won’t be surprised to see it change hands for a cool million.