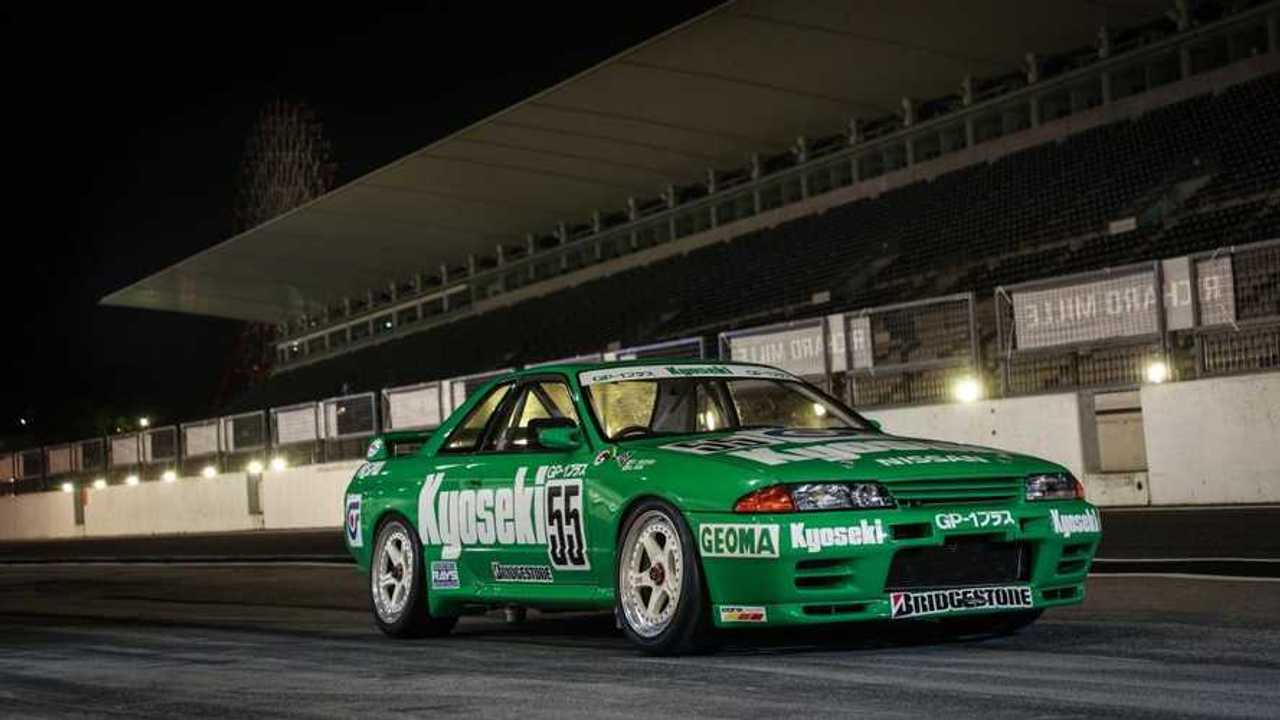 Campaigned by the factory Nismo team in 1993, this bright green Gozdilla is a rare chance to acquire an example of Nissan's most iconic racing machine

There are few opportunities to purchase the greatest race car Nissan has ever produced, the Skyline R32 GT-R. Forget its Le Mans prototypes, ultra-successful IMSA ZXes and legendary Primera touring car – the GT-R which popularised 'Godzilla' is the best of the best, according to the brand's own fans.

As the only Nismo factory-campaigned R32 GT-R from the 1993 Japanese Touring Car Championship, this 'Godzilla' being sold by BH Auction during next month's Tokyo Auto Salon is, therefore, an extremely rare opportunity to acquire the ultimate motorsport Skyline.

It's something of an oddity that a car which had little competition to speak of could become so iconic in its home nation. Nothing could hold a candle to the swathe of R32 GT-Rs which populated the JTC's podium steps race after race.

But every early '90s Godzilla is now an icon in its own right – from multiple champions Masahiro Hasemi and Kazuyoshi Hoshino's self-entered Skylines with their respective Unisia Jecs and Calsonic cars, to godfathers of drifting Keiichi Tsuchiya and Kunimitsu Takahashi man-handling the STP Taisan car sideways.

Perhaps not as revered due to its single season but equally as competitve was the Nikko Kyoseki car, campaigned by Larrousse Formula 1 pedaller Toshio Suzuki and future Le Mans class winner Akira Iida.

Aboard the Group A R32 GT-R GP-1, works Nismo drivers Suzuki and Iida came frustratingly close to challenging eventual champions Hoshino and Masahiko Kageyama for the 1993 title. Suzuki did much of the heavy lifting, clocking more distance than any other JTC driver that year. But both were fast.

Their peak came at the mid-season Tsukuba round with the #55 Nismo's sole 1993 victory. There were hard-fought podiums at Okayama, Tokachi, Sportsland Sugo and Fuji, but they were playing catch-up after a disastrous start of the season had effectively ended their title hopes immediately.

It's just as well this GT-R has recently gone through a full restoration, given its debut put it straight into the wars. Chasing the second placed #1 Hasemi Skyline, #55 suffered the worst fate possible in a multi-class race; tripping over a backmarker.

Team Advan's JTC-2 class Corolla Levin meandered into the Skyline's path approaching the start-finish line, causing a collision and forcing the #55 to take a lengthy pitstop for repairs. 14th was not a good starting point for a planned title assault.

Keen to make up for lost ground, Suzuki and Iida went on the offensive at Suzuka, scoring pole position. Jumped by both Hoshino/Kageyama and Tsuchiya/Takahashi at the pit-stops, the #55 R32 GT-R went for a last minute lunge at the final chicane in a desperate attempt to retake second place – only to end up in the gravel.

BNR32 213251R was definitely put through its paces during a tough but brief racing career. These days its looking minty fresh with a fresh lick of green paint for that eye-catching Kyoseki livery. One aspect that hurts this car's provenance but likely improves its reliability and drivability is a fresh RB26DETT-based motor.

We just hope whoever buys it takes this Godzilla back to where it belongs – the track. Despite its technologically advanced torque-splitting four-wheel drive system the Group A R32 GT-R is still a raw, ferocious machine. Just watch any of 1993's JTCC onboards and you'll see Japan's best drivers wrangling to keep the GT-R on course.