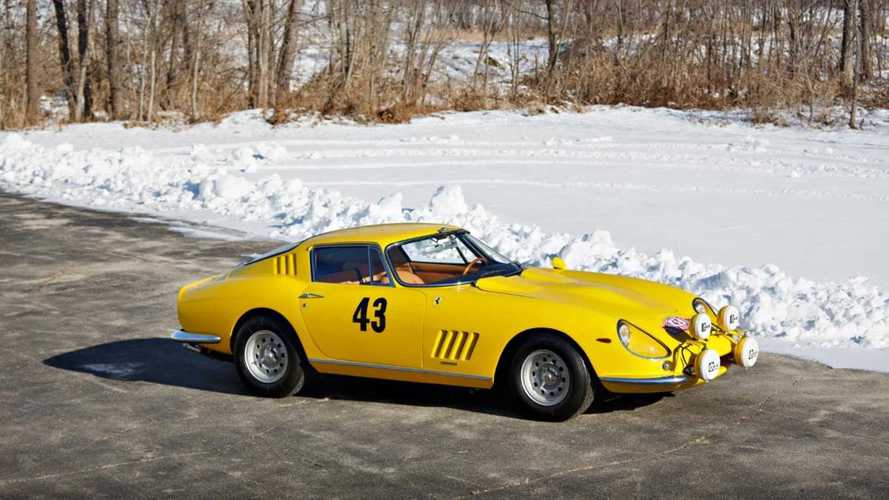 Ferrari's test mule for the 275 GTB, which stretched its legs on Rally Monte-Carlo over half a century ago, is now headed for Arizona to be auctioned off

In amongst a stable of special Ferraris lie a select few stallions of La Scuderia’s most historically significant cars. Prototypes for Maranello’s sports cars are especially valued, so it’s little surprise that the sole 1964 Ferrari 275 GTB prototype, which competed in the 1964 Rally Monte-Carlo to prove its credentials, is being offered up at $6-8 million (£4.75m - £6.3m, €5.3m - €7m) by Gooding & Co for its Scottsdale sale next January.

Thanks to its Pininfarina-designed, Scaglietti-built bodywork and Colombo V12 engine, the 275 is a standout model from Ferrari’s halcyon sports car racing days, successfully taking on the unenviable task of succeeding the 250 – the ultimate byword in classic Ferrari.

Chassis 06003 acted as a test bed for the 275 GTB’s continuous development – 06001 was a prototype for the open-top GTS variant – featuring several experimental components that would later transfer to the road car. First and foremost of these was the five-speed manual transaxle, the first time a transaxle had featured on a road-going production Ferrari instead of being restricted to its pure-bred racers.

These days, prototypes are shrouded in secrecy, tested in camouflage and, in the case of high-end sports cars with racing DNA, put through their paces during private testing days on racing circuits. Ferrari went so far as to build its own proving ground, Circuito di Fiorano (known simply as ‘Fiorano’ to you and me), which opened in 1972. But with the 275 GTB prototype’s coming of age occurring nearly a decade earlier, it had a much more public testing of its abilities.

Keen to push its prototype to the limit, Ferrari’s then racing manager Eugenio Dragoni selected the toughest proving ground of all for 275 GTB 06003 – the Rally Monte-Carlo. Still known today as one of the trickiest, most treacherous rounds of the World Rally Championship, there was no better place to test its capabilities to the extreme.

In preparation for its rally debut, 06003 was equipped with auxiliary spot lamps, reinforced glass, a locking differential, modified hood, plus an extra windshield wiper and a passenger-door mirror for the Monte’s daunting, icy, and sometimes dark passes. Spectators would struggle to miss it, though, resplendent in a new coat of Giallo Prototipo paint.

Giorgio Pianta was selected as the lucky driver to pilot 06003 on its one and only competitive appearance in 1966. Though not one of rally’s big names, he was a sensible pair of hands, having been one of Lancia’s factory European Rally Championship drivers the year before.

Alas, Rally Monte-Carlo lived up to its fearsome reputation and got the better of Ferrari’s 275 GTB test mule, with Pianta retiring. He didn’t seem particularly bothered by his DNF, though, given he later described his cameo with the 275 GTB as "the most beautiful memory of my life" in Ferrari World magazine.

Still in similar spec to its 1966 Rally Monte-Carlo appearance, this 275 GTB prototype has been stashed away in a private collection for the last 25 years but has finally re-emerged to be auctioned in Scottsdale next month.

Unsurprisingly for such a momentous vehicle in Ferrari history, it doesn’t come cheap, with an estimate sale price of $6-8 million (£4.75m - £6.3m, €5.3m - €7m). It’ll cross Gooding & Co’s auction block on January 18-19 next year at its Scottsdale sale, more than 50 years after it crossed the start ramp in Monte-Carlo.