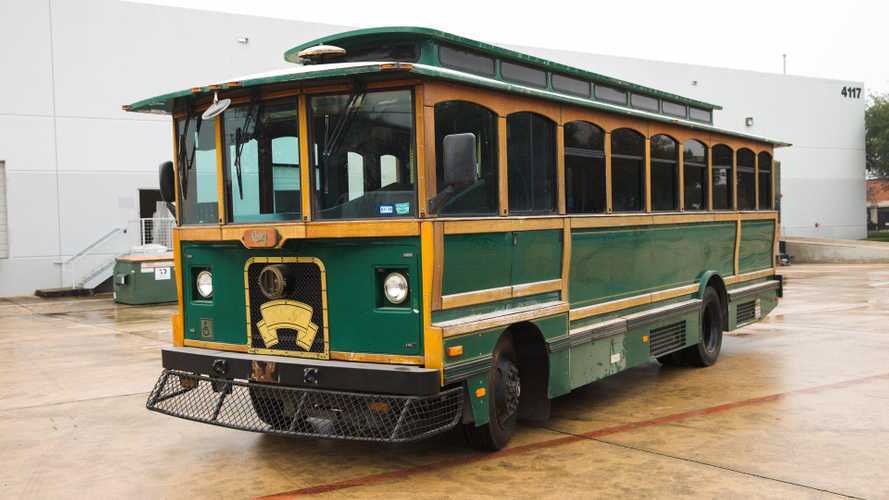 One of Austin’s beloved Armadillo buses has surfaced on the open market. Some think that the 1998 Chan Bu City Bus would make an excellent RV, but we think it could make a great Zombie Survival wagon…

If you lived in or around the Austin, Texas area during the last decades of the 20th century, this bus may appear familiar to you. Cruising up and down Congress Avenue, this 1998 Chan Bu City Bus offered free transport around town.

Christened the ‘Armadillo Express’, these San Franisco-esque trolley car lookalikes traversed an extensive system of loop lines around downtown Austin, from the West Campus to Pleasant Valley and all points in between. Now, courtesy of MyClassicGarage.com – you can buy one!

Having carted students and tourists alongside commuters and business folk across the sun-baked tarmac of the Texan capital, the bus was retired back in 2009 and has languished in storage ever since.

The free ride came to an end with the squeeze of 2008’s Lehman Brothers-sponsored financial crisis, although operator Cap Metro did implement cut backs – from five routes to two – in an effort to retain the service. Sadly, the ‘Dillo’ came to an end in the summer of ’09.

Dry stored after the 2009 mothballing, as you would expect of a popular facility vehicle, the mechanicals are in fine running order, having been maintained throughout its decade long public service. There’s 85,064 miles (137,000 km) on the odometer, with the diesel engine and automatic gearbox reportedly functioning without protest.

Despite retiring from the Austin bus route, the 1998 shuttle remained road legal until February 15, 2016. The vehicle has barely turned a wheel since then, but – according to the vendor – there should be no problems passing its next inspection. Thanks to a favourable climate, the hull isn’t infected with corrosion and therefore structure and frame remain solid.

However, the big question is – what would you use it for? With proven dependability for long or short journeys in blistering heat, you could easily convert the 1998 ex-Armadillo wagon into a motor home or food truck.

Coincidentally, if you keep the tram car fender up front and add some further reinforcement, this could just make the ideal Zombie survival vehicle. However, don’t panic if you witness stooped individuals walking in a stunted manner while groaning, as there are still persons suffering the consequences of years upon those firm wooden seats.

Retailing with an asking price of $29,900 (from $403 per month), get a closer look at this unique opportunity here.

Gallery: This retired 'Dillo' from Texas is the coolest retro bus you can buy