Take a minute to admire this rare blue Ferrari F40 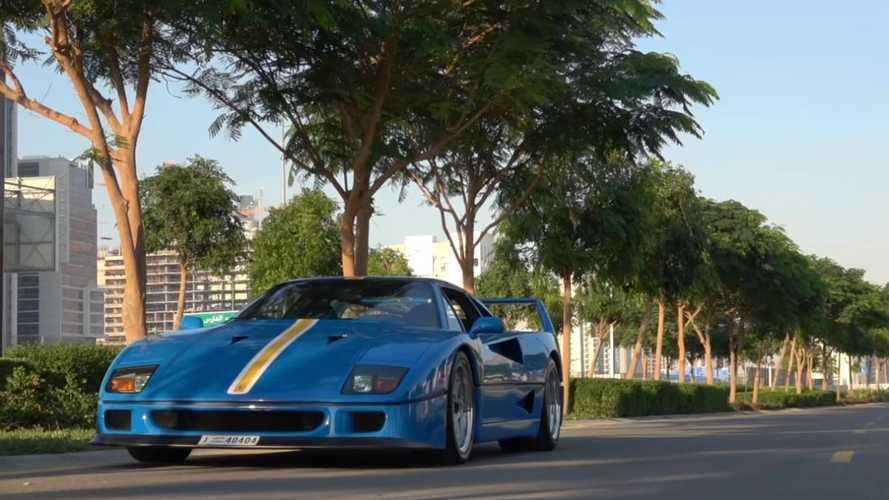 This Azzurro Dino Ferrari F40 is one of the most famed cars on the internet. Scroll down to have a closer look

The Azzurro Dino Ferrari F40 is one of the most famous cars on the internet, with its striking blue livery with white and yellow stripes and 2936cc (2.9-litre) twin-turbocharged Tipo F120A/F120D 90° V8 engine. YouTuber Mr JWW has got close to the car, and has taken the internet on a tour of Dubai with its owner Abdul.

Starting off as an original 25-year-old Ferrari F40, the car underwent a complete refurbishment five years ago, from an overhaul of the engine to changing all the wiring and applying the super popular paint job, which was completed in just six months.

As a result, it looks and feels like a brand new car fresh from the factory and, unlike many classic supercars, it is enjoyed more frequently on the roads rather than in a garage. When bought it had around 4000km (2500 miles) on the clock, and now it has over 9000km (5600 miles).

‘It really blows away my mind. It’s 30 years old, yet it can keep up with a lot of modern day cars’, is one of Abdul’s remarks during the video, as he powers the F40 down a Dubai road. The lightness of the car, coupled with the amount of torque it has, proves super effective in the heat of Dubai due to the amount of grip the tyres can generate. It’s almost as if the roads of the Emirate were designed for supercar drivers.

But being able to go quickly, in a very enjoyable manner, doesn’t necessarily make the F40 a easy car to drive, and this is why the Italian classic is still so popular. It has the performance of modern day supercars but without the fancy electronics and four-wheel drive, which can take away the driving challenge that requires the person behind the steering wheel to remain engaged.

This is what makes it stand out amongst the large supercar crowd in Dubai, something that's not easy to achieve given the average supercar zipping around Dubai's streets. The Azzurro Dino livery helps it fit in more with its modern and always flashy counterparts in the Middle East, including a newly delivered McLaren Senna that Mr JWW and Abdul encounter while driving.

The F40 looks far from the decades older than the Senna that it is, especially with the impeccable interior, and Abdul credits this ‘new car’ feel to an OCD approach to keeping the vehicle in as good condition as possible, and the fact that regardless of a build quality of a car, it will degenerate if left sat in a garage.

Having fuel flowing prevents such a thing from occurring, as long as you maintain the car while in use, and Mr JWW hypothesises with a related tale that it is ‘the ones that sit are the ones that die’. Thank goodness this F40 is still being driven in anger.