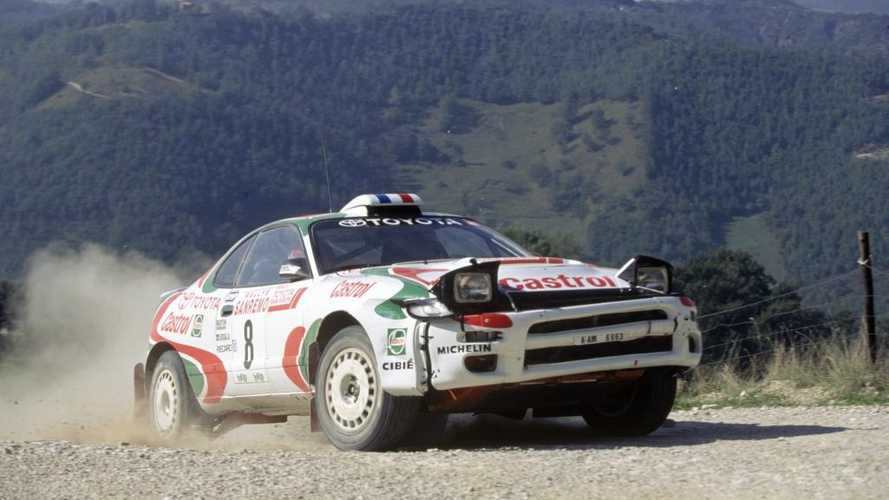 Toyota reached its rallying peak in the Group A era of the World Rally Championship, sweeping to winning success with three generations of Celica and subsequently the Corolla during the 1990s. It won both the drivers’ and teams’ titles in the same year twice with the Celica ST185, in 1993 and 1994, establishing the Celica ST185 amongst the all-time greatest rallying machines.

The Celica ST185 Frenchman Didier Auriol drove to Rallye Sanremo victory on his way to the 1994 world championship title has now appeared in the line-up for Bonhams’ Paris sale, and is a car which proved pivotal in the outcome of that year’s title race.

More iconic rally cars of the past

Despite a successful four year stint with the all-conquering Lancia factory team, it was Toyota with which Auriol would become synonymous, edging out the man he replaced at Toyota, Carlos Sainz, for championship glory in 1994.

On his way to that sole drivers’ title, Auriol faced off against Sainz on Rallye Sanremo, the penultimate round of the season taking place in the hills straddling the southern tip of Italy and France’s border. Toyota Team Europe handed Auriol the keys to K-AM 6983, which had amassed a less than desirable record heading into the crucial championship shootout.

First appearing in 1993 on the RAC Rally, Britain’s round of the WRC calendar, Italian pilot Antonello Fidanza retired K-AM 6983 while running through the second pass of Donington Park circuit’s superspecial. Once Auriol got his first turn at the wheel at the 1994 Acropolis Rally, the Celica’s engine died while running in second position. Not a great omen for such a crucial event.

K-AM 6983’s streak of bad luck looked set to continue when Auriol dropped over two minutes to runaway leader Sainz on the opening day of that year’s Rallye Sanremo. But Auriol loved Sanremo – he finished his career with more wins there than anywhere else bar home turf on Rally Corsica – and mounted an almighty comeback.

Chipping away at Sainz’s two minute advantage over the next two days, Auriol stole the lead away with only one stage of the rally left, beating Sainz to victory by 21 seconds to complete a stunning recovery drive. That head-to-head victory proved crucial, with Sainz making an unforced error on the season finale in his last push to beat Auriol to the title.

After its pivotal role in 1994’s title battle, K-AM 6983 moved to the Toyota’s satellite H.F. Grifone SRL team, where it won two European Rally Championship events in 1995; Rally Bohemia with Enrico Bertone at the wheel, and the 1995 Rally San Marino with fellow Italian Matteo Luise driving.