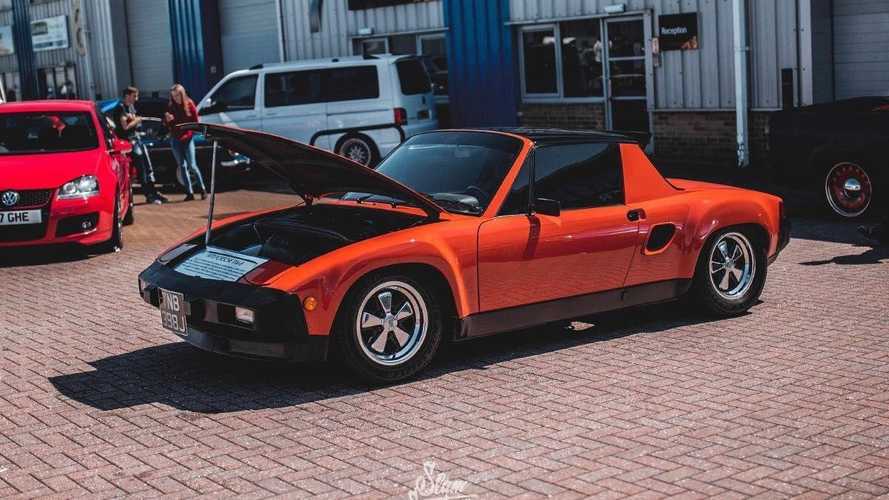 The Porsche 914 was the entry-level sports car of the 1970s, but with a 5.7-litre Chevrolet V8 inside, it's something completely different

The Porsche 914 was an entry-level sports car designed hand in hand with Volkswagen, so was never supposed to be a high speed beast. Though not as highly regarded as its esteemed 911 older brother, the distinctive rear-end of the car became synonymous with the affordable sports car of a generation.

Some 914 owners had other ideas though, including one who replaced the air-cooled VW boxer engine with a 5.7-litre (350ci) Chevrolet V8.

The two seat convertible now has over triple its previous power output at 335bhp, with the addition of performance cams, headers and an electric ignition, and looks more powerful thanks to wheel arches borrowed from a GT variant of the 914-6.

The car runs on 15" polished Fuchs wheels, and was converted by American tuner Renegade. Despite power coming from a significantly larger engine, it still uses the same five-speed manual gearbox. According to the seller, the only time you’ll be using the car in first gear is if you want to go sideways.

In addition to the arches, there are also newer bumpers, and the car sits low on the road. It was imported to the UK four years ago by its current owner, and is rust free. They describe it as being able to ‘roar up the road’ but also as being ‘quick and scary’.

There are some imperfections on the car’s vibrant orange paintwork, which is coupled with a gloss black roof and satin black rockers. Renegade custom built a radiator for the car, which is fed by a heavy duty water pump in the front trunk. The same pump also supplies two pusher fans.

A Chevrolet badge adorns the engine lid, telling you how special this car is. But that's not the only nod to what lies underneath. It's been dubbed the 914-8, a reference to the number of cylinders and a continuation of the 914-6 nomenclature used on the original six cylinder cars.