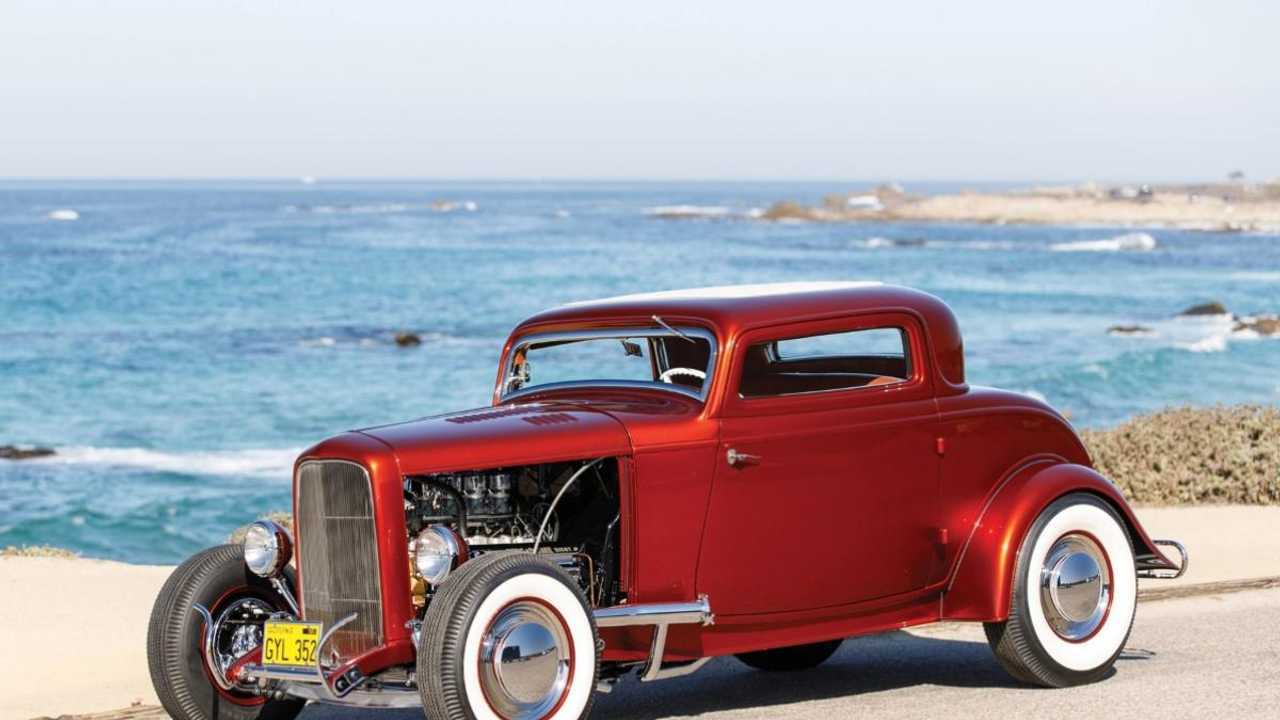 Lloyd Bakan won nearly 50 awards with this car, including the Pebble Beach Concours

This 1932 Ford three-window coupe is one of the most famous hot rods in history. It’s no coincidence that most model car toys resembled this car when ‘Hot Wheels’ first came out. What brought this car much of its fame was when it was photographed alongside a swimming pool with two models for a Hot Rod Magazine cover shoot. What obviously caught the eye of onlookers was not the beautiful women alongside it, but the 1953 DeSoto 291ci hemi V8 engine, with four carburetors and an Iskenderian camshaft, poking out of the front of the vehicle. With that engine in full flow, it could hit 103mph over a quarter mile.

It also has a stunning shape, with a curved body, modified rear fenders, Pontiac taillights and an exposed engine. What the iconic shot didn’t show was the tan Naugahyde tuck and roll interior, Mercury Monterey steering wheel and the nine Stewart-Warner curved glass gauges on the dash.

Over time the car’s engine has been modified, with high-domed pistons, the Weiland four-carb intake and Stromberg 97s being added over the years. The exhaust system also received an overhaul, and Altadena Auto Body originally gave the car nerf bars and rolled the rear fenders forward to give the car its desirable shape. The iconic colour of the car was also an Altadena mix.

Lloyd Bakan is closely associated to this car, and described it as ‘the best of them all’ when referring to his hot rod collection. He won 48 awards with his car, and attended so many car shows the hot rod garnered a reputation. Painter Hershel ‘Junior’ Conway remembered: ‘I first became aware of that car at a show in San Diego in late 1957. The finish was unbelievable; it was so striking. Lloyd put a lot of effort into that paint. He’d use Kleenex tissues to wipe it down, so he wouldn’t scratch the surface. And he towed the car to shows with his ’49 Cadillac!’

When it wasn’t being towed, shown or looked after, it was being driven by Bakan, until he sold it in the late 1950s. The buyer installed a 462ci Mark II Lincoln V8, and once exhibited it with reverse wheels. It was sold several more times, with continuous changes to the engine, and it took a bit of research once John Potter had bought it until he realised it was the ‘Bakan’ car. He restored it back to a more period specification.

The last sale took place without an engine, and buyer Don Oroco tracked down Bakan to help with restoration details, the car having fell into disrepair. When they heard of a special Pebble Beach Concours class, they upped their game. Getting the exact Altadena colour was the biggest challenge, but they managed it, and won the ’32 Ford 75th Anniversary Historic Hot Rod class. RM Sotheby’s is now selling the car at The Petersen Automotive Museum Auction on December 8, with an estimate of $400,000 - $500,000 (£310,980 - $388,730).