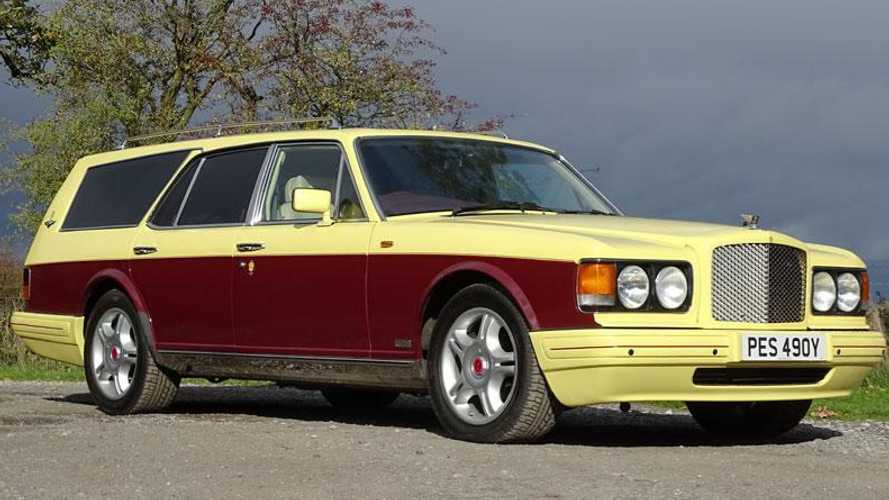 Chassis no. SCBZS0T04DCH07397 started life in Bentley’s Crewe factory in Cheshire, Lancashire’s southern neighbour, and was supplied to St Helier Garages, a Rolls-Royce mains dealer on Jersey, one of the Channel Islands. It stayed on the island and was serviced by the garage until 1998, by which point it became fed up of being so close to the French and returned to its northern roots.

It was sent to the renowned Coway Ltd of West Horton, Lancashire with 33,000 miles on the clock, and was converted into the shooting brake you see in the pictures today. The Lancastrians took pride in their work, and also re-trimmed the whole car with new hide and headlining, and incorporated a DVD player. Box set of ‘Our Friends in the North’ director's cut not included.

According to the vender, ‘it is very rare to find an early Mulsanne Turbo, [so] it must be unique to find one in shooting brake styling. Finished in mustard with claret. Colour coded bumpers front and back, radiator shell painted with chrome grille. Fitted with Rolls Royce sports suspension. All woodwork including the picnic trays have also been refurbished.’

Seeing as it’s a Bentley, it does of course include all the luxuries and high standard equipment you would expect from the brand, including power assisted steering, electric seats (no need for a handle to change the angle), air conditioning, cruise control, stainless steel sills, lamb wool rugs, and a roof rack. That last one must be designed with a holiday to a 1970s ski resort in mind. Why would that picture be in mind? Because the car is finished in mustard and claret, and that is the colour of all 1970s skiers.

The car rides on 18” alloy wheels, has a wooden steering wheel for steering them, and also includes parking sensors, a sat nav, a chilled drinks refrigerator (for those old bottles of Sarsaparilla and Dandelion & Burdock) and umbrellas designed with the same material and style as the back awning. I’ve already taken the ski resort metaphor too far, so these detailing are more reminiscent of family trips to Morecambe Beach, or an episode of The Prisoner. Its current mileage is 36,000, and the sale comes with a full Bentley book pack, the original order form and specification sheet. The car’s registration number is PES490Y, and is being offered by H&H at its Pavilion Garden auction on November 28.