Is this the most famous Ford GT40 of them all? 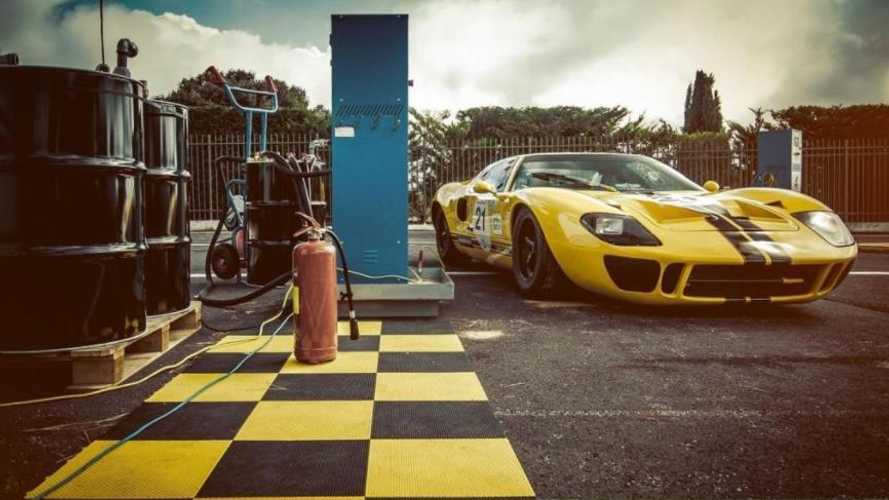 This Ford GT40 has been a racer, film and magazine star, concours winner and museum exhibit. Now it could be yours!

Sourcing a genuine Ford GT40 can be a task in itself, let alone finding one with legitimate film provenance. However, that’s exactly what we have here. Bearing chassis code number P/1027, this Ford GT40 entered the world as a 1965 production racing coupé before moving into the realms of stardom.

Upon completion – in ‘Belgian Yellow’ – at the hands of Ford’s build team, P/1027 was fired across to Belgium for prominent display during the 1966 Brussels Motor Show. Shipped back to Ford and resprayed with a coat of white paint with a blue center strip, the vehicle was then sold to MHM Film Studios for use as one of two film cars for John Frankenheimer’s 1966 motorsport film – Grand Prix.

While Grand Prix’s plot holes are large enough to accommodate an F1 transporter, the car action is solid and remains enhanced by various high speed stunts, filmed from the back of an adapted GT40, no less. Actor James Garner even took the majority of driving duties upon his shoulders – hats off to the guy!

The car’s 500+ page history file contains many pictures of P/1027 on the set of Grand Prix, showcasing the vital behind the scenes role the car played alongside its onscreen action. After filming was complete, the GT40 was sold by MGM to Charles Sechan of Prospect, Pennsylvania. He promptly gave it a third colour scheme in as many years, covering the panels in maroon paint, with golden sill lines. Clearly loaded with cash, Mr Sechan used the car as a daily driver – at around 8mpg.

In February 1968 the GT40 found its next owner. Sold to Jim Toensing of Minneapolois, Jim sent the Ford straight onto the race track for ‘classic’ competitions. Following a shunt at Elkhart Lake, the car was passed to James Ladwig, who commissioned a complete restoration following the original specifications, using original components and parts to create an end result like no other.

Judged as the ‘best race car’ during the 1993 Meadow Brook Concours, the racer was then displayed at the Briggs Cunningham Automotive Museum in Costa Mesa, California. It remained there until the museum’s closure during the mid-1990s. Ownership then passed to a Hong Kong based collector – Chip Connor – who kept the car in Nevada until 2002.

Arch enthusiast and doyen of the collecting world, Sir Anthony Bamford, then acquired the vehicle via Barret Jackson’s auction in August of that year for $405,000. Entrusting its race preparation to Gelscoe Motorsport, the firm produced an outright winner, taking 2005’s Whitsun Trophy, driven by Sam Hancock; setting a then blistering 1m23.7s lap record.

In 2006 it was sold to Lord Irvine Laidlaw who campaigned it – now in his familiar maroon/silver colour scheme, and run by the experienced Simon Hadfield – at the 2008 Le Mans Classic before competing at Dijon in 2009.

The GT40 was then sold to long time historic racer and collector Carlos Monteverde, who brought back the original livery and ran it at the 2010 Le Mans Classic. Since then, the GT40 has been spotted in various prestigious events – such as the Goodwood Revival and Members Meeting, Le Mans Classic and Patrick Peter’s CER races.

This genuine, race-born Ford GT40 car represents the perfect opportunity for those looking for a potent historic racing car with fascinating history. A welcome entry into the world's most prestigious events, while it will also fit prominently in any serious car collection, the Ford boasts a CV like no other; racer, film star, magazine exhibit, museum piece, historic competitor, collection showpiece...

Gallery: Is this the most famous Ford GT40 of them all?