Bangers4Ben: the most bonkers auction ever! 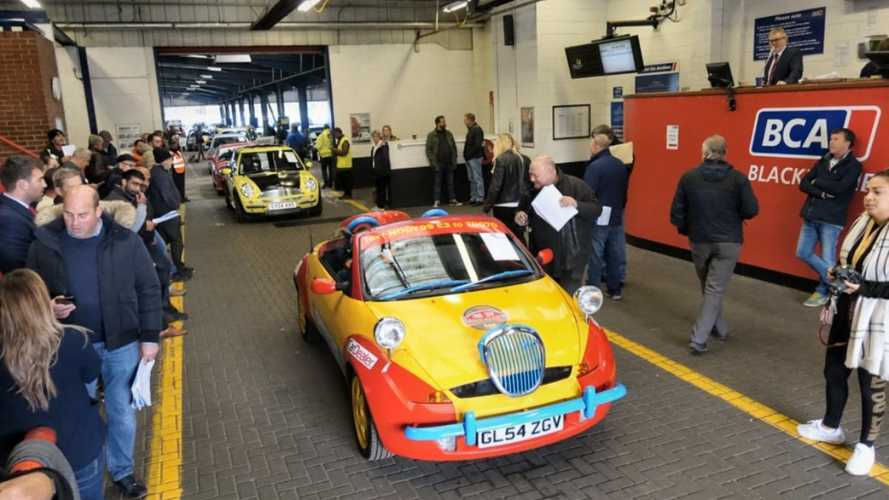 Raising money for independent charity Ben, BCA staged an auction of rally cars with a difference…

The 10th annual Bangers4Ben sale at BCA Blackbushe on Friday, October 26, was successful in raising nearly £20k for Ben – an independent charity and dedicated partner to the automotive industry, providing support for its people and their family dependents.

The sale attracted large crowds of both buyers and attendees to BCA Blackbushe, who competed with online bidders for the vehicles, some of which were totally unique.

Boasting special wraps and extra trim, a total of 29 vehicles that had participated in the 2018 Car Dealer Bangers4Ben Rally were offered for sale, with all proceeds going directly to the charity. BCA auctioned the cars free of charge to ensure that the maximum amount could be gifted, also donating all buyer’s fees to the cause.

Yet these were no supercars. Each vehicle on the block was purchased by competing rally teams for no more than £750, before being donated for the sale. The rally covered a total of 1300 miles over five days, departing from the historic Brooklands Museum in Weybridge before traversing France, Germany and Belgium and ending at Rockingham Speed Way.

The most popular vehicle to attract a flurry of bidders was the mobile ‘Nag’s Head Pub’, so named after Only Fools and Horses. Starting life as a Vauxhall Vivaro van, the five-door builders wagon had covered almost 250,000 miles throughout its working life before the event.

Kitted out with an internal bar featuring working beer pumps, a dartboard, bar stools and glasses, vintage ashtrays and a service bell, the van sold for £1825. Finished off with a special wrap showcasing scenes and characters from the iconic TV sit-com with an accompanying wooden pub sign fitted to the roof rack, you’d have been a plonker not to bid.

That wasn’t the only TV-inspired machine to pass under the hammer. A Ford Street Ka Luxury had been transformed into a replica of Noddy’s Car with a red, yellow and blue colour scheme trumpeting vintage-style headlamps and a repurposed grill. Selling for £700, the two-door roadster had covered 63,000 miles.

Merging Western ideals for a unique spin on Anglo-American culture, a 1993 Reliant Robin generated interest from bidders looking for something different. In this case, a Robin painted up like the Dukes of Hazzard’s General Lee, which found a new owner for £800.

As an oddity amongst oddities, a 1994 Toyota Corolla Liftback was offered with an interesting history file, including a photo of its original owner – a lady by the name of Edna – getting the keys at the supplying dealer and a receipt showing that air conditioning was an additional £1,739!

Tim Naylor, BCA’s Head of PR commented, “We were delighted to support Ben and Car Dealer Magazine to stage the tenth anniversary Bangers4Ben sale. The sale featured a great selection of vehicles that had participated in the 2018 Car Dealer Magazine Bangers4Ben Rally and our customers dug deep once again to contribute to a total of just under £20,000 on the day. Ben is the UK’s only dedicated charity which provides health & wellbeing support for those who work, or have worked, in the automotive industry and their family dependents.”

Matt Wigginton, Business Development Director at Ben, said: “This is a fantastic result, we’re absolutely thrilled. Even after 10 years of Bangers4Ben, we never tire of seeing the creativity and effort that goes into preparing the cars! We would like to give our heartfelt thanks to everyone who took part in this year’s event and made it such a success. We would also like to thank Car Dealer Magazine for their hard work and organisation, as well as BCA for staging the auction. All funds raised from the sales of the bangers will help Ben to support automotive industry people when they are going through life’s toughest challenges.”