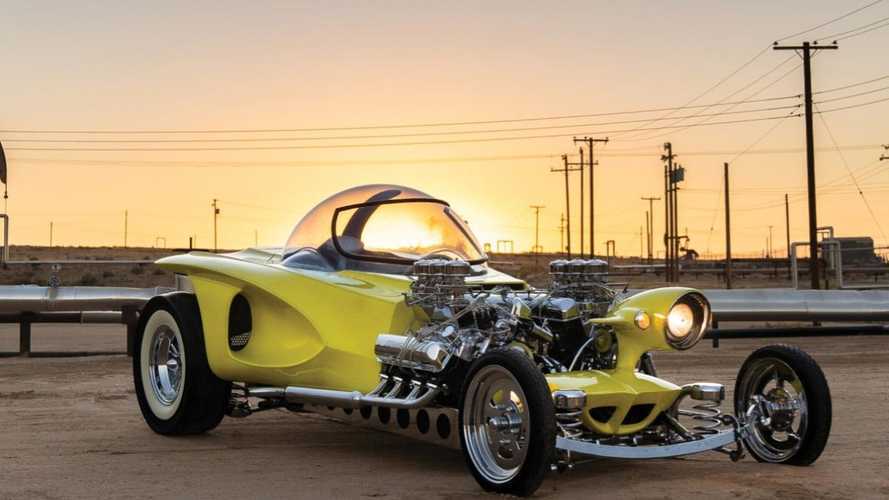 A recreation of Ed Roth’s 1962 Mysterion which featured at this year's Amelia Island concours is being sold at RM Sotheby’s Petersen Automotive Museum auction without reserve on December 8.

Ed ‘Big Daddy’ Roth was possibly the most creative custom hot rodder there was. His creations were of the type that were adored by the young but scorned by the old, but most impressive of all was the craftsmanship and experimentality he used in his work.

Beyond the usual materials of trade, Roth dabbled with plaster of Paris, Vermiculite and fibreglass, a little used material at the time. This allowed him to construct unusual shapes and features that other materials would not, and once his cars were complete they were often seen as moving pieces of art. In fact, he was once referred to as ‘the Salvador Dali of hot rodding’ by American author Tom Wolfe.

Roth undercut the art car market in Southern California in the 1950s and ‘60s, and worked alongside many other famous artists. Beyond his full-size automotive creations, Roth also had his super successful model car business, a variety of cartoon characters and a host of merchandising. Each helped the other, and enabled him to stay in business for decades.

In the 1960s, Roth was arguably at his wildest, and most of the one-off cars from this time now exist in museums or private collections.

The ‘Mysterion’ is one of these rare beasts, and has a radical twin-engine set-up. Two tilted 390ci Ford big-blocks were exposed at the front, and their natural offset permits exhaust header clearance. Stealing attention from the engines is as asymmetrical styling, with an oblong grille and an alien looking nose, dominated by one large, pod-mounted headlight on the left.

At the back was a hydraulically operated bubble cockpit for the driver, painted gold. The whole car was chromed, but its powerful looks belied the fact it couldn't drive, and now no longer exists. Unlike this replica, which does.

Jeff Jones had no documentation to go off when building this virtually identical homage, and based his design off a scale model and some magazine articles. He built a new frame, sourced the correct Ford engines, and mounted them so that one ran.

He made up for the lack of documentation by writing his own book about the car: ‘Ed Roth’s Mysterion, the Genesis, Demise and Recreation of an Iconic Custom Car’.

Purchasing a ‘Roth’ car is a rare opportunity, especially one that drives, as you're more likely to find them in an art museum than out on the road.