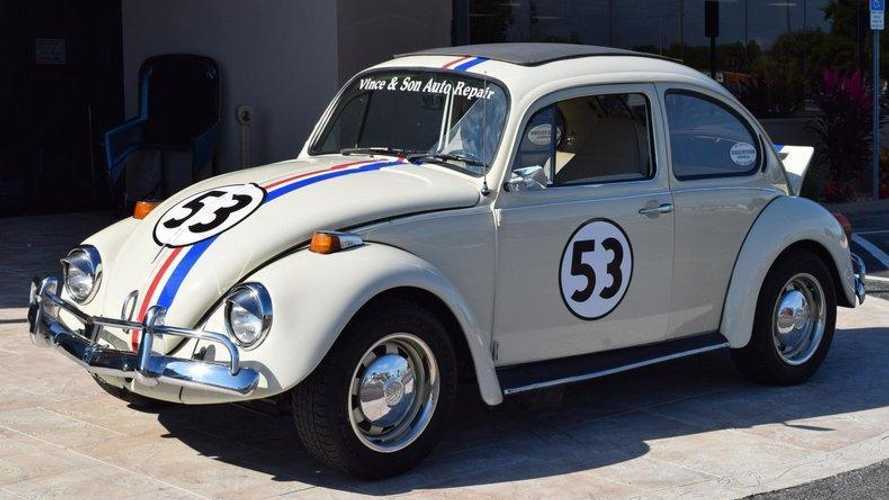 There are scores of Volkswagen Beetles out there donning Herbie livery, but this 1973 Bug from our classifieds is fully loaded – and then some.

Powered by the commonplace 1584cc 4-cylinder engine mated to a 4-speed manual transaxle, churning out 53bhp and good for 84mph, all seems normal within the drivetrain; until you clock the NOS tank in the passenger foot well.

Things get even more bizarre upon landing in the cabin. There’s retro gauges and vinyl seats for the ultimate rose-tinted reflection of the early 1970s, but then you’ve also got something unique – a James Bond-esque control panel.

Don’t think Herbie’s turned homicidal, though. There is no ejector seat or bonnet mounted machine gun for a Disney-sponsored bloodbath, rather the switches and buttons sport more mischievous talents.

Through the witchcraft of electricity, you can utalise the dashboard controls to make the car’s bumper smile and frown – destined to give other commuters a heart attack.

Not only that, but you can also make the headlamps ‘blink’ and raise the bonnet as though it’s talking. Again, guaranteed to make the commute hilarious – or fatal – for all involved.

As if that’s not enough, you can squirt water in various directions from the front of the car and blast The Love Bug theme both inside and outside the vehicle.

We do need to emphasize that this VW is not a genuine film car, instead a tribute to all that we love about Herbie. Besides the stripes, rear spoiler and added gadgets, the entire Volkswagen radiates a loveable mantra so often lost with other replicas.

This also means that Lindsay Lohan has not sat in the driver’s seat, denoting that the materials are devoid of cigarette smoke and alcohol stains.

Looking for something to turn heads without the brazen guilt of blinged out supercars or egotistical SUVs? This is the perfect tonic for an automotive world largely devoid of humour. Get a closer look with the AutoClassics classified advert.