Check out this beautiful Citroën 2CV...motorcycle? 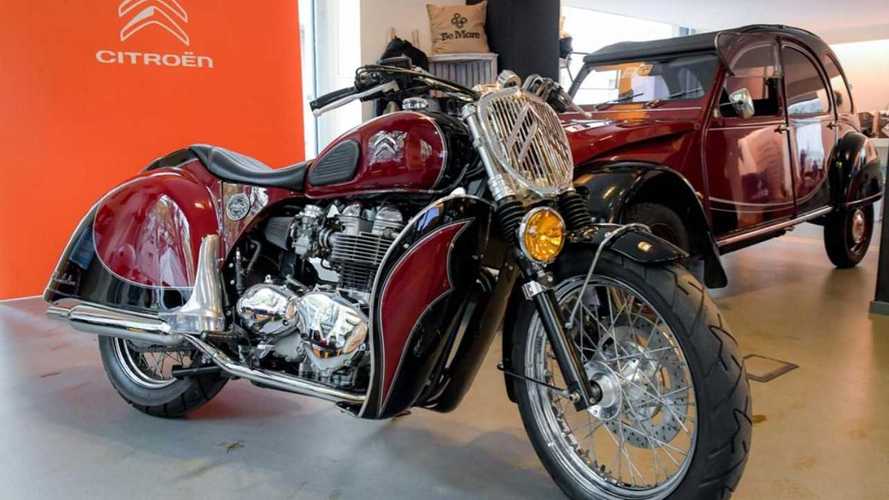 Of all the automotive celebrations this year, the 70th anniversary of the Citroën 2CV has provided quite possibly the most exciting products and events. South Garage, one of Italy’s leading motorcycling firms in Milan, has created a one-off motorcycle based on the 2CV Charleston. It’s one of a number of concept bikes the company has built, and probably the most unusual of its repertoire.

The Citroën 2CV went into production in 1948, and continued to do so until 1990, and was assembled in factories across the world, with one surprising omission being Italy. In 1989, 2CVs were also withdrawn from sale in Italy due to European emission standards.

The unique motorcycle takes its inspiration from the two cylinder car – hence the ‘2CV’ moniker – and retains as much of the French post-war design as possible, including the period colour scheme of black and maroon.

As well as the colour scheme, a high level of attention has been paid to the mudguards, designed to mimic exactly the 2CV’s iconic arched contours. Each element has been taken from design drawings South Garage has used, and a real life model they’ve had access to.

A rarity for a modern motorcycle, it also features a chrome-plated parcel holder, shaped with Citroën’s instantly recognisable double chevron logo. The logo also appears at the front, centred above the front wheel. The exhaust pipes are shaped with a retro ‘cone’ effect, and the taillight looks like it’s straight out of French noir cinema.