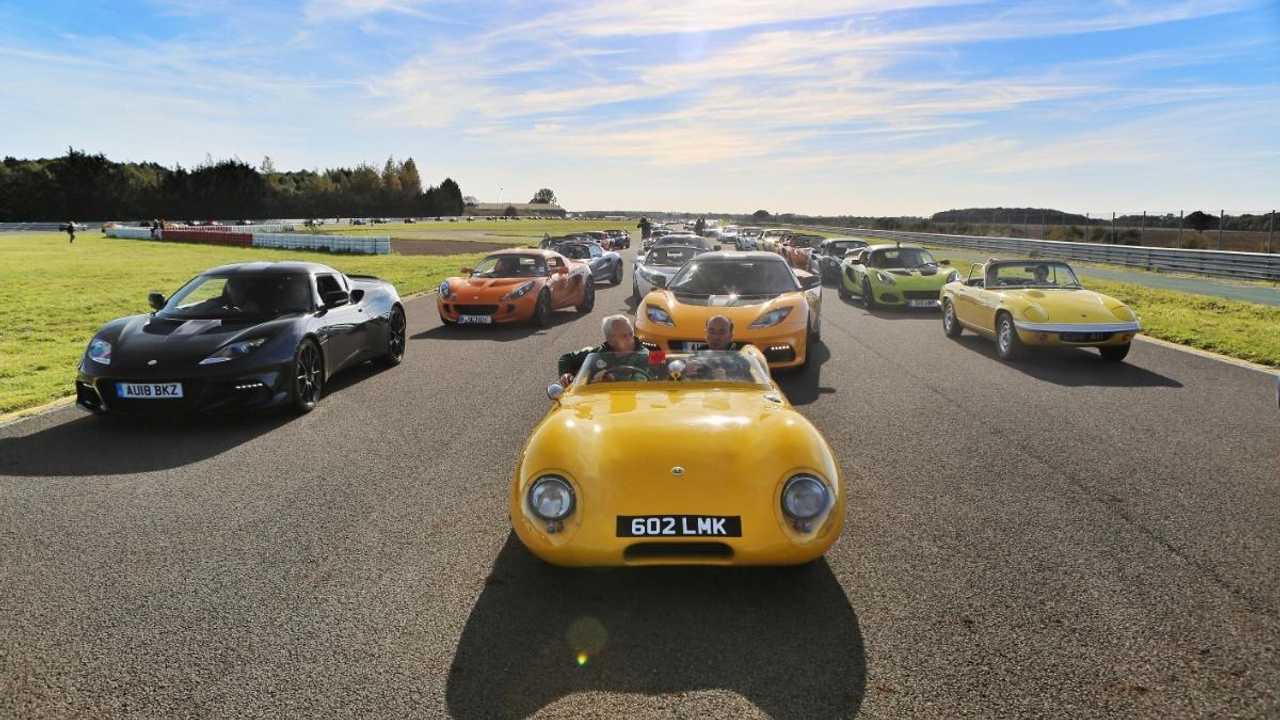 Some 1,600 road and competition Lotuses from a range of eras, including legendary F1 machines, gathered to celebrate the marque’s 70th anniversary at its Norfolk base

Lotus has held a spectacular party to celebrate the legendary marque's 70th birthday, with the largest collection of Lotuses ever seen, including several famous road and competition cars.

This year marks 70 years since the first Lotus car was built in 1948. To commemorate the milestone 8,000 enthusiasts and Lotus owners from across the globe attended a sold out event at Lotus's Hethel base in Norfolk last weekend. In total 1600 cars from all eras gathered – the largest ever assembly of Lotus cars.

The event’s final flourish was the largest parade of Lotus sports cars ever seen on the Hethel track, with some 700 cars and their owners taking part. It included the widest range of Lotuses, from the very latest models through to historically important machines such as the Lotus Mark VII, a Sunbeam Lotus and a Lotus Carlton.

Group Lotus’s CEO Peng Qingfeng also unveiled two bespoke Lotus Evora GT410s in heritage livery at the event. He also led the track procession in the passenger seat of a Lotus Eleven once owned by the famous Lotus founder Colin Chapman, and which was driven in the procession by Chapman's son Clive, head of Classic Team Lotus.

As well as road cars, Lotus’s legendary past in motorsport and particularly Formula 1 was honoured. Team Lotus is one of the most famous and successful constructors in F1 history with 13 world championships. Classic Team Lotus had plenty of cars to display on demonstration runs for the crowds, including the ground-breaking Cosworth DFV-powered Lotus 49 from the 1967 season and the Lotus 79 with its ground effect aerodynamics that won Lotus’s last F1 world championships in 1978.

Also present were the rally Sunbeam Lotus, Lotus Cortina – famous in saloon car racing – all the way to the present line-up of the Evora, Exige and Elise.

The 100,000th Lotus ever built, The Jim Clark Trust’s Lotus Evora GT410, was also on display. It was unveiled at this year’s Goodwood Festival of Speed in the livery of Jim Clark’s famous red and silver Lotus Elan. Those in attendance were able to buy tickets to win the car in a special raffle on the day. More details on how to enter can be found at www.jimclarklotus.com.

A secret concours competition also took place. Online influencer Sam Fane, otherwise known as Seen Through Glass, in secret judged all of the cars on site. He gave the prize to a Sunbeam Lotus which was driven by Guy Fréquelin, with co-driver and now FIA president Jean Todt, in the 1981 World Rally Championship.

The celebration wasn’t just about four wheels either, as there was also a display from the 110 Lotus Bike Club showing both the Lotus Engineering 108 and 110 bikes in action.

For the first time people from all over the world were able to watch the event live via online streams on YouTube and Facebook – an additional 8,000 watched via these routes.