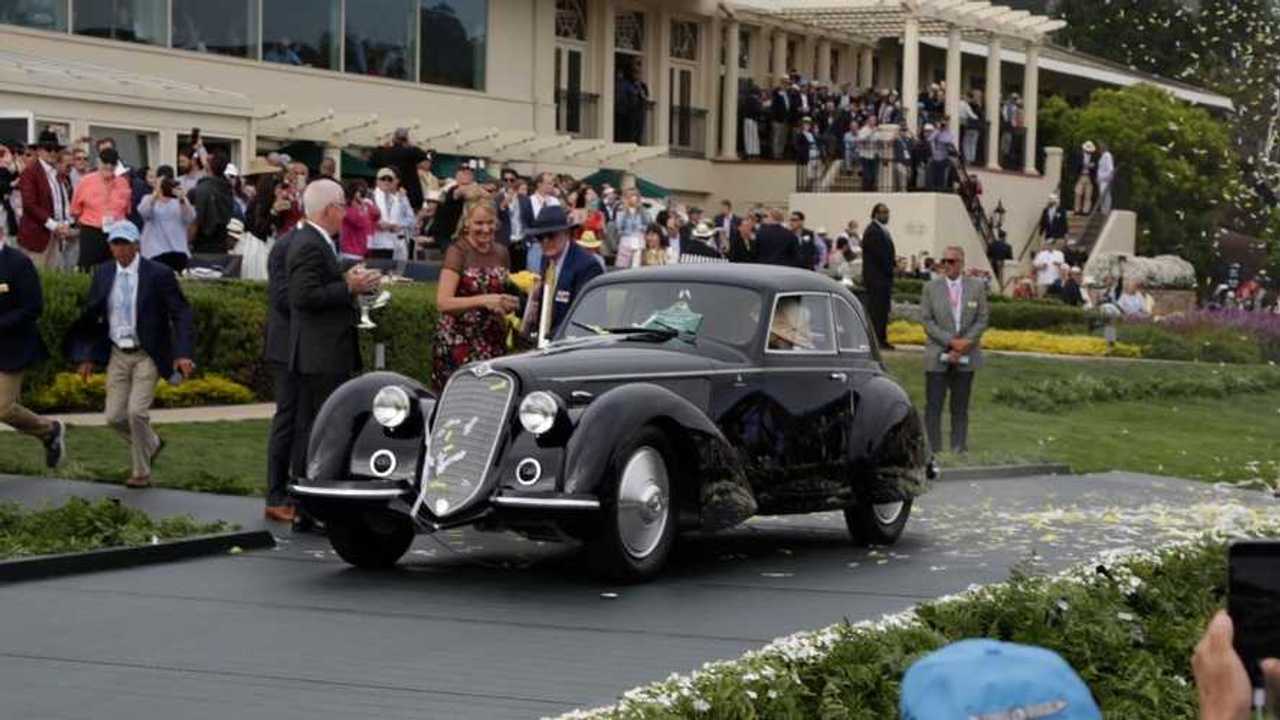 A 1937 Alfa Romeo 8C 2900B Touring Berlinetta has won the Pebble Beach Concours d’Elegance – the finale of California’s Monterey Car Week and the world’s most important concours.

This was the first public appearance of the car following an extensive restoration. It has won prizes at Pebble Beach in the past, namely Most Elegant Closed Car in 2001, but owners David and Ginny Sydorick of Beverly Hills have since had it returned to its 1938 Berlin motor show specification.

Not only was the 8C the most technologically advanced model of the time, the Sydorick car also wears arguably the most elegant of any of Carrozzeria Touring’s bodywork creations.

‘This car is one of only five built and it has recently been completely restored, taking a huge amount of effort and dedication from all those involved,’ said David Sydorick after the prize-giving. ‘It feels great to win at Pebble Beach today and receive a Rolex watch; I look forward to wearing it proudly.’

The Alfa Romeo is also a car that received considerable publicity when new, having been unveiled at the 1937 Paris auto show, followed by appearances at the 1937 Milan show and the 1938 Berlin show. It consequently appeared in several magazines of the period, as well as in the Alfa sales brochure, in which it was referred to as the ‘Coupé Leggero’.

It’s thought to have lived in Germany until 1956, when it was imported to the United States. It was restored in the 1990s, resulting in that first Pebble Beach win – but its latest restoration has raised the standard considerably, hence the Best of Show award.

Pebble Beach Best of Show winners are notoriously difficult to predict, but you can see the AutoClassics prediction of potential winners, posted on the morning of the concours here. The list includes the winner and one of the runners-up.

In fact, the two runners-up were the 1948 Talbot Lago T26 Grand Sport Figoni Fastback Coupé (pictured below), owned by Robert Kudela from the Czech Republic, and the 1929 Duesenberg J Murphy Town Limousine, from the Lehrman Collection, making its second appearance at Pebble Beach.

The Pebble Beach event has been running since 1950, initially on the European model of the time, which concentrated on new cars. However, in 1955 it shifted its focus onto collector cars, and later racing cars as well, which prompted other concours to follow suit.

Winners of the Best of Show award receive the trophy and Rolex watch you see below.