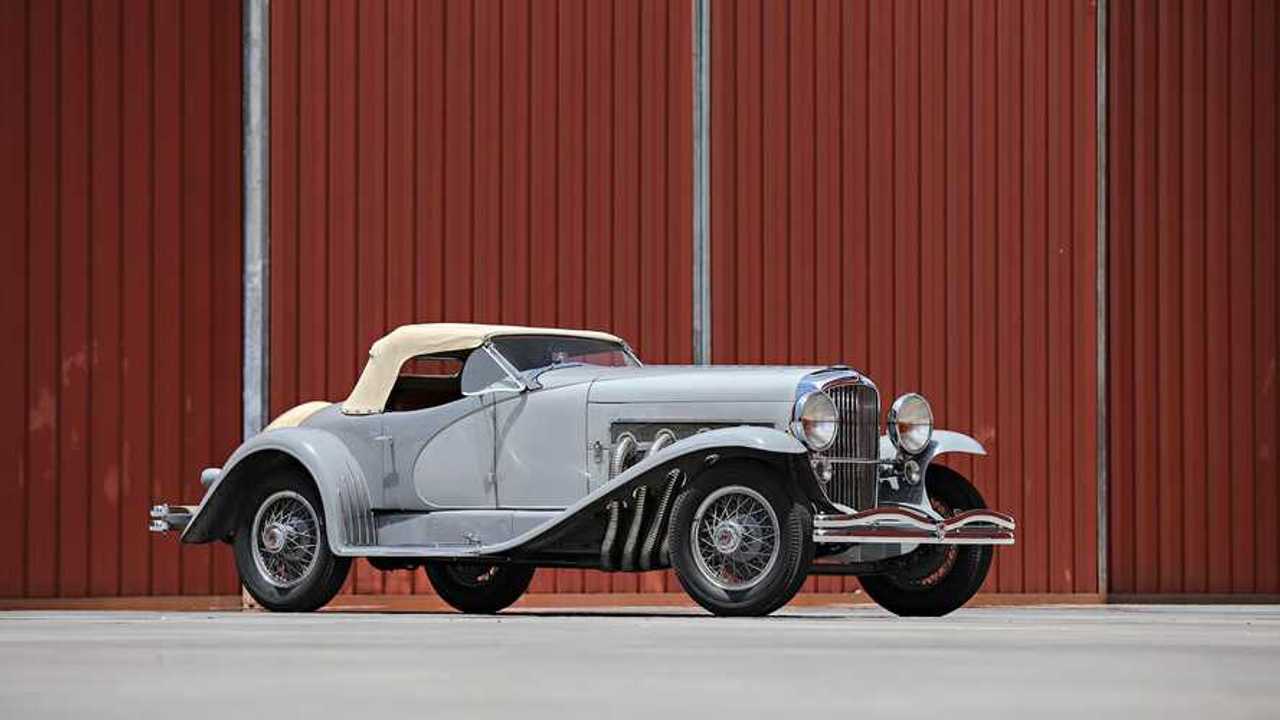 One of just two SSJs built, owned by Hollywood star Gary Cooper and later by Briggs Cunningham, also becomes the most expensive pre-war car ever

The sale took place Gooding & Co sale during the Monterey Car Week in California, with the high price achieved quickly due to an intense bidding war between two phone bidders. The record for the highest priced American car had previously been held by the first Shelby Cobra, which achieved $13,750,000 at an RM Auctions sale in 2016.

The car is one of only two Duesenberg SSJs ever made, and was built on a specially shortened 125in wheelbase. Of the two cars, this one (chassis J-563) went to legendary actor Gary Cooper and the other (chassis J-567) went to fellow Hollywood superstar Clark Gable.

Gary Cooper was known for his love of fast cars. The SSJ was perfect for him, with its 400bhp supercharged twin-cam inline 8-cylinder engine – 80bhp more than the standard Duesenberg SJ, which was already the most powerful and one of the fastest production cars of its day. The SSJ Speedsters improved on the SJ with a lightweight bobtail body by LaGrande, a subsidiary of Auburn.

'This incredible car embodies everything that is exciting about an automotive masterpiece: beauty, rarity, provenance, and sheer power. This SSJ is one of the all-time greatest classics and is poised to set an auction record for a pre-war American car,' says David Gooding, founder and president of Gooding & Company.

As if Gary Cooper's ownership isn't enough, the SSJ has also had several more important owners. Following Gary Cooper’s ownership, it passed through several California owners, from a 20-year-old millionaire in Los Angeles to an industrial designer in San Francisco.

In 1949 it was bought by collector D Cameron Peck of Illinois., who later sold the SSJ to fellow collector and famed sportsman Briggs Swift Cunningham. It became a centerpiece in Briggs Cunningham’s famed museum in Costa Mesa, CA for many years.

On 31 December 1986, Miles Collier bought the Briggs Cunningham collection. Cunningham had been close friends with the Collier family, and Miles Collier continued to add to the collection over the following years. The SSJ has been one of the mainstays of the Collier Collections, and associated Revs Institute, in Naples, Florida for 32 years.

'Many vehicles are billed as ‘speedsters’ or ‘racers,’ but the Duesenberg SSJ really was,' says Miles Collier. 'Peaking at 140mph in 1935, it was simply an unbeatable performer, matched by unbeatable style.'

The sale of this car out of the Miles Collier Collections will surprise many, but it's part of Collier's wish to leave a legacy of knowledge regarding the automobile as the most important technological artefact of our age. Proceeds from the sale will be used to support this mission for future generations.

'Believe me, it is not easy to part with this wonderful car,' said Collier before the sale. 'It symbolizes so much in our history, and has so much glamour and speed. But my mission is bigger than just one car. In today’s world, the automobile’s continued ability to be meaningful is under threat.

'Will the personal car be part of people’s lives in the future? Will people understand and remember that the automobile is the most important invention of our age? That it shaped the world as we know it? I want to ensure the legacy of skills, appreciation and care for the importance of motorcars is not lost.'

'The Collier family is one of the great leaders and innovators in the history of automobiles,' says David Gooding. 'Miles Collier has made it his life’s work to educate and promote the understanding of the role of cars in our lives. He has also curated an extraordinary collection of classic and groundbreaking cars. The Miles Collier Collections are unmatched and that is why it is such a remarkable event that he would present one of his most admired classic cars for auction.'

The Miles Collier Collections are housed in the Revs Institute in Naples, Florida – a not-for-profit organization, founded by Miles Collier and wife Parker in 2008. There are over 100 of rarest and most important cars ever built, dating from 1896 to 1995.

The Institute serves as a haven for scholars, preservationists and connoisseurs of automotive history. In keeping with Miles Collier’s vision to embolden the legacy of the transformative impact the automobile had on 20th century society, the Revs Institute is also one of the leading repositories of historical automotive documents, photographs and ephemera.

Now Miles and wife Parker J Collier are putting together a new team of leaders and thinkers to create Revs 2.0, an idea-driven, not object-centered, new, non-profit initiative to provide the car community with insights and expertise they couldn’t find anywhere else. Alongside Revs 2.0, Parker Collier’s new company, Meaningful Ventures will create profitable, self-sustaining enterprises to carry the cultural legacy of the car to future communities.

Work has already begun to build Meaningful Ventures. Collier Car Clubs will set up communities of meaningful car owners. Collier AutoMedia will educate, entertain, provoke and inform digital visitors and readers. The Panzer Project uses a vintage, Mercedes 540K Action Panzer as a reminder of the realities of evil. Collecting Arts is the creator of a revolutionizing curation software system for virtually any kind of collection.

See the SSJ on the Revs Institute website here.