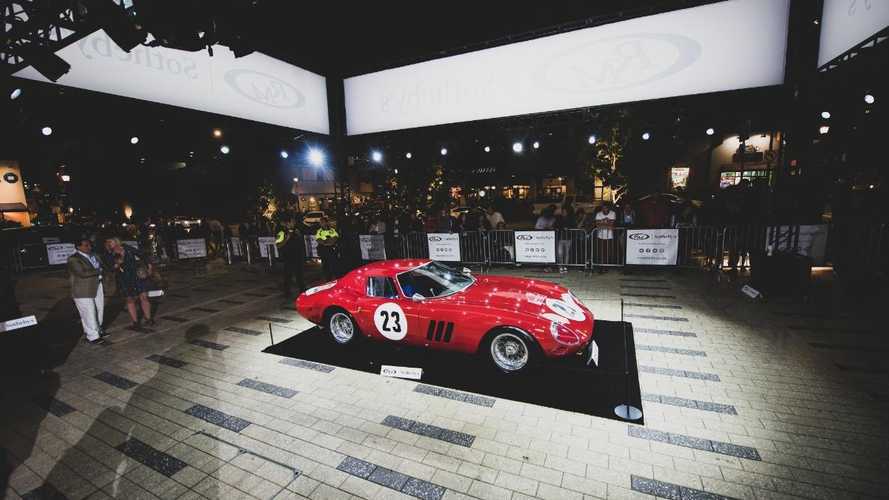 RM Sotheby's has sold the Series 2 GTO for the highest price ever achieved for a car at auction, to a packed saleroom in Monterey, California

The 1962 Ferrari 250 GTO that twice won its class in the Targa Florio has sold for a world record price of $48,405,000 at RM Sotheby’s Monterey sale - making it the most expensive car ever sold at auction.

The GTO was driven onto the stage by five-time Le Mans winner Derek Bell. Auctioneer Maarten ten Holder then started the bidding at $35m; it climbed quickly to $40m, then slowing and moving up in $250,000 increments to a hammer price of $44m, to great applause from the huge crowd packed into the sale room.

Just 36 examples of the GTO were built, all of which have survived, and the model is considered the most valuable car in the world.

This car, chassis 3413 GT, was the third to be built. Used as a test car by Ferrari, it was driven by 1961 Formula 1 world champion Phil Hill during the ’62 Targa Florio.

Shelby Myers, car specialist for RM Sotheby’s, said: ‘This marks just the third time that a GTO has been offered for public sale in the new millennium. [It is] Ferrari’s most successful racer and the world’s most sought-after collector car, full stop.’

Later in 1962, the GTO was sold to regular Ferrari privateer customer Edoardo Lualdi-Gabardi. He entered ten races that season, winning all but one – although even then he still finished second in class. In return he won the Italian National GT Championship.

Lualdi-Gabardi acquired a second GTO the following year and subsequently sold 3413 to Gianni Bulgari, under whose ownership the car won its class at the 1963 and ’64 Targa Florio. Across its history, the Ferrari entered and finished 20 races, all without incident.

More than 50 years later, this GTO has retained its original engine, gearbox and rear axle, as well as its factory Series II body fitted by Carrozzeria Scaglietti in 1964.

After a series of sales, in 2000 it was bought by current owner Dr Greg Whitten, a former chief software architect at Microsoft, Ferrari enthusiast and vintage race driver. It has competed in historic motor sport events since.

'My journey with the 250 GTO has come to an end,' said Dr Whitten, 'but I am excited to see how this fantastic car is enjoyed by the new owner. They will have seen the seemingly unbelievable list of superlatives that are used to describe it – legendary, historic, holy grail – but I can assure them that once they get behind the wheel, they will understand that every one of them is true.'

Myers added: ‘The fact that the GTO exists as it did in period, along with Dr Whitten’s long-term, enthusiastic ownership, only adds to the car’s impeccable pedigree.’

Although sales of a 250 GTO are incredibly rare, earlier this month American car collector for the ex-Pierre Dumay and Léon Dernie example that finished fourth at Le Mans in 1964. That made it the highest selling price of all time for a car. In 2013, chassis 5111GT sold for $52m, a .

The 250 GTO’s auction will take place at RM Sotheby’s Monterey sale on August 24/25, alongside the world-renowned Pebble Beach Concours d’Elegance.