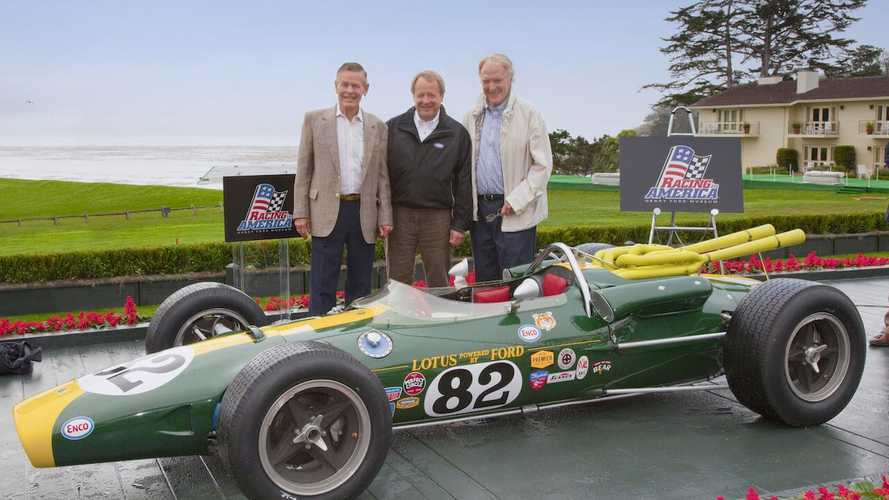 The Indianapolis 500’s transition from front-engine roadsters to rear-engine cars during the mid-1960s is to be celebrated at this year’s world renowned Pebble Beach Concours d’Elegance.

A special class, called ‘The Indianapolis Revolution’, will be exhibited on the competition field on August 26 during the 68th running of Pebble Beach.

Ken Gross, a selection committee member and chief class judge for Pebble Beach Concours, said: ‘At first, Indy traditionalists scoffed at these light and lithe new cars, but they proved to be significantly faster than the old roadsters, and once they could be reliably raced, it was obvious that the rear-engine configuration was the only way to go.’

It was double F1 champion Jack Brabham’s appearance in a rear-engine Cooper-Coventry Climax in 1961 that most notably kicked started the crossover. Despite finishing ninth, it highlighted the importance of good handling dynamics.

Three cars already confirmed for the concours are the ‘65 Lotus 38 as driven by Clark, donated by The Henry Ford Museum – it previously featured at Pebble Beach back in 2010. Also on show will be the ‘63 race winning Agajanian Willard Battery Watson Special, on loan from the Indianapolis Motor Speedway Museum, plus the ‘61 Quinn Epperly Indy Roadster with its ‘laydown’ engine that aided aerodyanmics.

‘The Indianapolis Revolution’ follows on from this year’s Indy 500 Legends Day celebration of roadsters that competed on the banking between 1953 and ‘64, winning every edition of the famous blue riband race.

The 2018 Concours will also feature Motor Cars of the Raj, Rollston Coachwork, Postwar Custom Citroën, Sporting Vintage Cars and Tucker. Plus, ‘organisers also promise another surprise (or two or three!) to be unveiled this summer’, according to a statement.