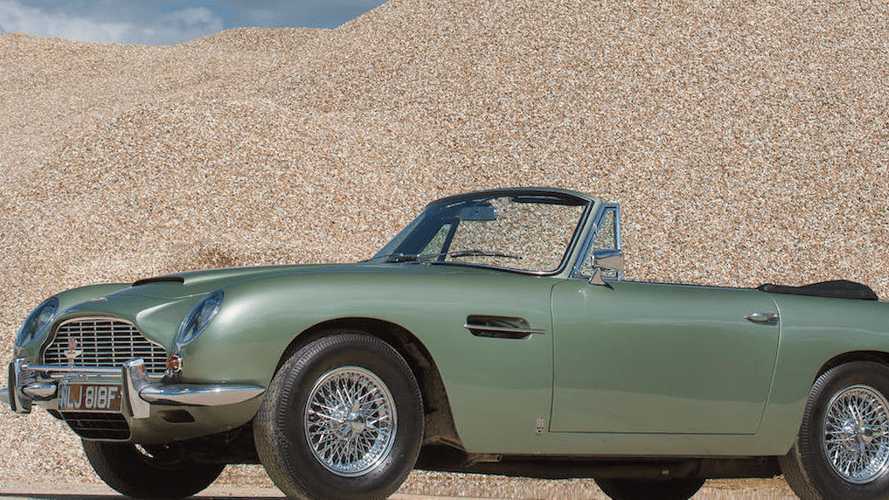 The Aston Martin DB6 MkI Volante previously owned by celebrated musician Jools Holland has sold during Bonhams’ Aston Martin Sale on June 2. One of only 140 MkIs built, chassis number ‘3659/R’ passed under the hammer for £494,300 including premium.

In an interview, Jools recalled his ownership of the DB6: 'A few years ago I bought an Aston Martin convertible: a DB6 Volante. And I remembered that when I was a boy, and we lived in a tiny house in Greenwich without a bathroom or any heating, my dad, who's dead now, bought me a toy model of the same car. And I realised that's why I'd picked that car.

'So I decided to drive my car back to my old neighbourhood. It was a dark, misty autumn evening and I parked outside my old house. There was no one around. I suddenly imagined my front door opening and my younger self coming down the path and me opening the car door and saying: "Hey, it's me! Jump in!".'

Costing more than a house when new, the ex-Jools Holland Aston left the factory gates on October 26, 1967; equipped with automatic transmission, power assisted steering, chrome wheels and originally finished in Autumn Gold. Supplied via HR Owen on November 17 of the same year, its first registration plate displayed ‘OYV 162F’. During ownership with the jazz musician, transmission was changed from automatic to manual.

Fitted with an earlier DB5 engine (no. 400/2116) at a date unknown, and finished in green metallic with black leather interior, this rare DB6 Volante even came with a BMIHT Certificate, V5C registration document, fresh MOT, and the aforementioned bills. What a package to make you feel Aston’s love.

Why the DB6 Volante is such a big deal

When DB6 production wrapped in 1970, a total of 1575 saloons had been hand-built, alongside 178 long-wheelbase Volantes – 140 MkIs and 38 Mk2s). These cars now stand among the most sought after of the David Brown-era Aston Martins.

The DB6’s introduction in 1965 marked the first use of the ‘Volante’ name. The wheelbase was now 4in longer than the DB5, resulting in an extensive re-style with a further-raked windscreen, raised roofline and reshaped rear quarter. The biggest change, however, was the Kamm-style tail, complete with spoiler, acknowledging the increasing importance of aerodynamic downforce in car design. Especially in one capable of over 130mph…

The engine was enlarged to 3995cc for the preceding DB5 and remained unchanged in the new model. Power output on triple SU carburetors was a healthy 282bhp, upped to a rather impressive 325bhp in Vantage specification.

The DB6 Volante drop-top could seat four in comfort, with generously appointed cabin materials featuring leather upholstery, deep-pile carpets and an electrically operated hood. Thirty-seven Volantes were completed on the DB5 short-wheelbase chassis before the model adopted the longer DB6 chassis in October 1966, first appearing in its definitive form at the London Motor Show.