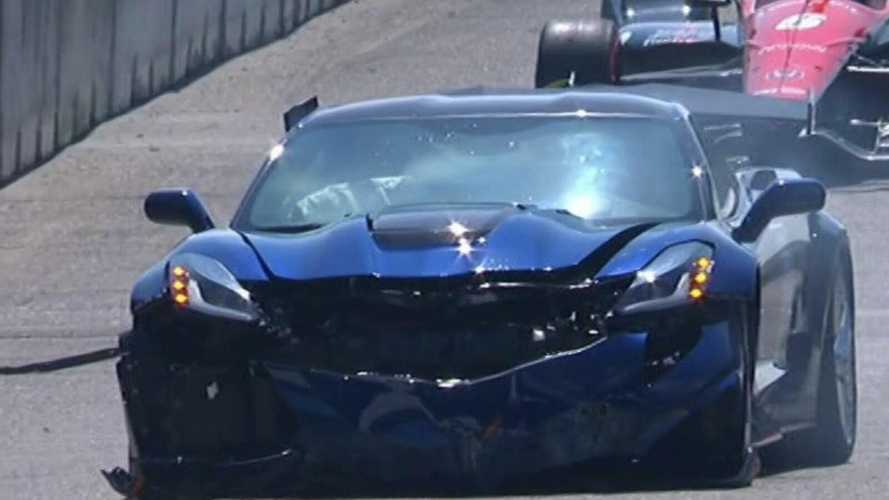 The 212mph Corvette, that can hit 60mph from rest in just 2.85 seconds, bit back hard during the Detroit Grand Prix

While driving behind the two-seater IndyCar and leading the field on the parade lap for race two of the Detroit GP, Mark Reuss hit a bump when exiting a corner in the 745bhp ZR1. As he accelerated out of Turn 2, he lost control of the rear of the $120,000 ZR1 and span head first into a concrete wall.

The Corvette came to a rest in the middle of the circuit and that forced the pursuing train of cars to stop on track, led by ex-Formula 1 driver and 2016 Indianapolis 500 winner Alexander Rossi. Reuss and his passenger, IndyCar official Mark Sandy, received an assessment but were both cleared at the onsite medical centre.

In a statement, Chevrolet said: ‘We are thankful that there were no serious injuries. Both the pace car driver and the series official were taken to the infield care centre, where they were checked, cleared and released.

‘It is unfortunate that this incident happened. Many factors contributed, including weather and track conditions. The car’s safety systems performed as expected.’

After the crash, Reuss (above) was replaced with regular pace car driver Oriol Servia, fresh from competing in last month’s Indy 500.