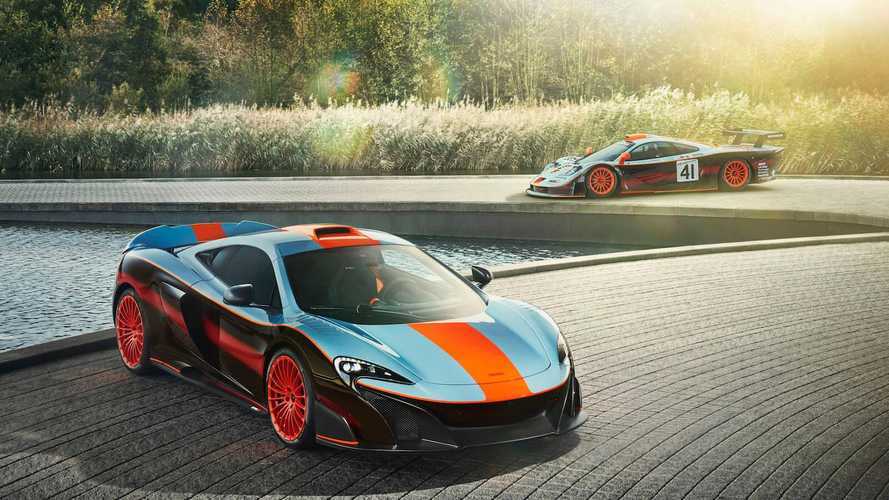 The Gulf-Davidoff GTC team livery used on the 1997 McLaren F1 GTR ‘Longtail’ Le Mans car has been recreated by McLaren Special Operations for a unique 675LT.

More than 1000 man hours went into the commission, which was produced as an homage to the GT1 class endurance racer. Completed with the permission of Gulf Oil, the bespoke 675LT now wears the iconic powder blue and day-glo orange livery.

Despite F1 designer Gordon Murray’s reluctance to convert the then-fastest car in the world to race specification, the GTR was produced for the 1996 BPR Global Endurance Series. After winning the title, the ‘Longtail’ variant was built to aid the car’s top speed on the Mulsanne Straight at Le Mans. In 1997, Pierre-Henri Raphanel, Jean-Marc Gounon and Anders Olofsson powered the Gulf car to a class win, finishing second overall.

Ansar Ali, managing director of McLaren Special Operations, said: ‘Creating a car like this unique McLaren 675LT, crafted to individual customer specification, is exactly the type of demanding commission that MSO Bespoke was formed to embrace.

‘Transforming the existing car from its original single-colour paintwork to a tribute to the McLaren F1 GTR ‘Longtail’ in Gulf Racing livery was incredibly demanding in its own right, but that was only part of the brief. We also replaced numerous standard 675LT components with MSO parts, and further personalised the car to clearly identify it with its owner – a service that an increasing number of MSO customers request.’

As part of the transformation, the 205mph 675LT received 20-spoke wheels and new sill badges that bear the customer’s initials. The car is fitted with louvered front wings, roof-scoop upgrade and carbon fibre airbrake.

On the inside, MSO Bespoke racing seats with orange and blue stitching have been installed, while the handling and powertrain bezels on the Active Dynamics Panel are finished in Gulf Blue. The vent bezel surrounds and surround to the stop/start button are Gulf Orange.