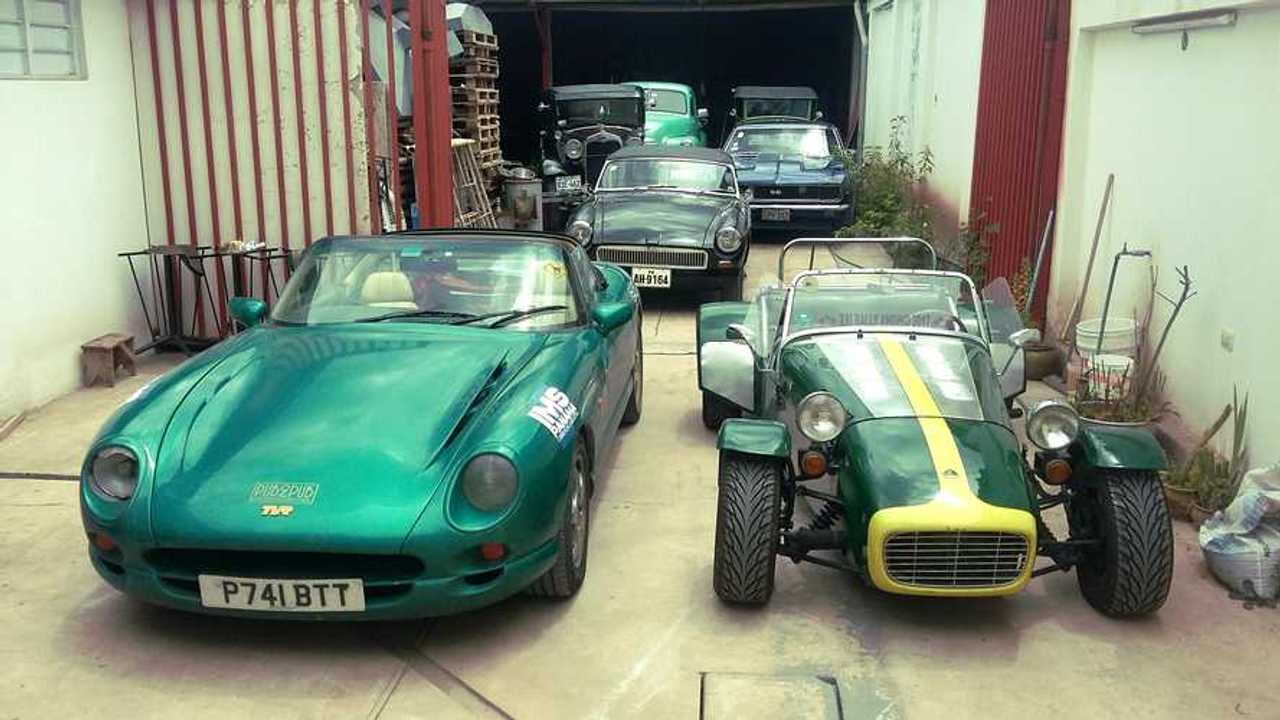 Having returned to the UK after completing the longest journey ever made by a TVR Chimaera, the Pub2Pub crew have announced two new ventures - Antarctica and Adolf Hitler's infamous Eagle's Nest hideout. And you can take part in visiting Hitler's mountain retreat!

Recently crossing the finish line to signal the end of a 27,000 mile expedition - covering 25 countries over 8 months and burning rather a lot of fuel - in search of the perfect drinking establishment, Ben Coombs' Pub2Pub label has laid out plans to tackle the wilds of Antartica.

To achieve this, Pub2Pub has launched a series of European road trips in which you can take part. Adolf Hitler's Kehlsteinhaus - also known as 'The Eagle's Nest' - has been unveiled as the first destination, and though further destinations are yet to be announced, we can exclusively reveal that one of them is called 'The Camembert Run'.

Unfamiliar with the project? Here's what Pub2Pub is all about.

As Coombs so casually explained while displaying his TVR within the AutoClassics hangar during Bicester Heritage's Sunday Scramble: 'A group of mildly unhinged adventurers set out to drive from the northernmost bar on the planet, to the southernmost.'

However modest Coombs is, there was more to the trip than that.

'We started from the island of Svalbard, 700 miles from the North Pole, and finished at the southernmost tip of South America. And as the idea was dreamt up while sat in a bar, it’s only logical that their vehicle of choice should be a TVR – not exactly a piece of engineering relied for its dependability.

'But against the odds, the TVR completed the journey with little in the way of issues, with a clutch replacement in Nicaragua being the only major surgery required.'

Coombs' Chimaera reached altitudes of almost 5km above sea level, battling temperatures of over 50°C and tackling some of the most dangerous roads on the planet.

'After a long journey in the heat you could often see the manifold glowing red through the bonnet slats.'

With the trip complete, you can read the full story here.

With the latest expedition complete, The Pub2Pub crew have their sights fixed on the South Pole.

‘The Pub2Pub Expedition was the latest in a series of unlikely journeys which have so far covered over 90,000 miles across about 80 different countries, with previous highlights including crossing Africa in a Porsche, and travelling to the far side of Asia in a Corvette,' explained Coombs.

'So, with 6 of the 7 continents visited, there’s only one left – Antarctica. Predictably, this means the only logical course of action is to set ourselves the goal of getting a sports car to the South Pole.’

‘This isn’t as daft as it sounds – with a suitably modified four wheel drive sports car, the right technical support and a reasonably hefty budget, it’s very much an achievable dream.’

You can join in!

To work towards such an ambitious goal, Ben has unveiled ‘Pub2Pub Adventures’; an organisation committed to providing adventure to paying customers and their vehicle of choice.

‘As worthy an objective as the South Pole is, we’re not blind to the fact that some of our best road trip memories have been on journeys to less outrageous objectives, so despite our heady goals, we’re not going to turn our back on the more accessible side of road tripping,' continued Coombs.

'How? Well, we’re going to be keeping the magic rolling by organising Pub2Pub-inspired road trips to some of the world’s most spectacular bars, which are led by The Pub2Pub crew and their Chimaera, and which anyone can join.’

Pub2Pub Adventures is launching this autumn with The Eagle Rally – a drive to one of Europe’s most stirring bars.

‘In southern Germany, where the rolling hills of Bavaria give way to the foothills of the Alps, there is a mountain six thousand feet high. On the summit of the mountain, there is a bar.

'To reach the bar, you must first negotiate the steepest road in Germany. From the top of this road, a tunnel takes you deep into the mountain, where a brass elevator awaits. Powered by a U-boat engine, this elevator lifts you 400 feet through the heart of the mountain, to one of the most dramatic bars in all of Europe: the legendary Kehlsteinhaus.’

Better known as the Eagle's Nest, this infamous mountain lair was constructed as a 50th birthday present to none other than Adolf Hitler. Its marble fireplace was a gift from Mussolini, its walls eluded the bombs of the RAF’s Dambusters, and its slopes were finally stormed by the US 101st airborne division.

'It’s not only a spectacular spot to enjoy a beer. It’s a place of history,' concludes Coombs.