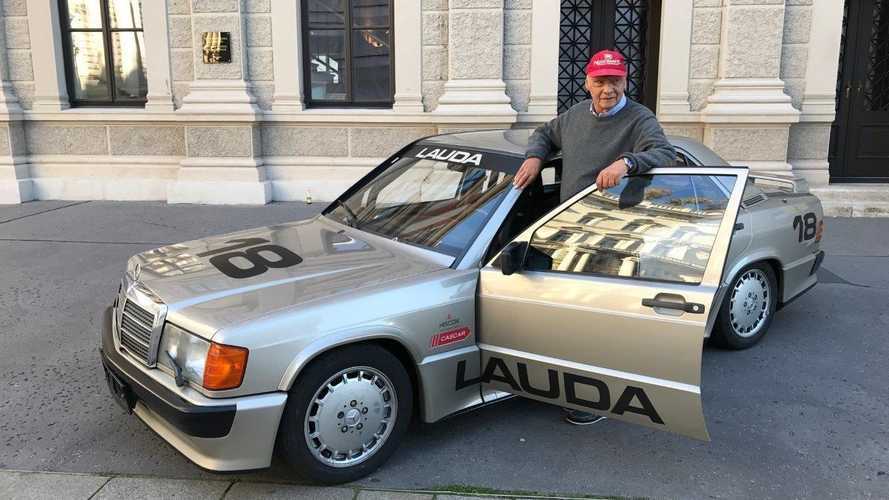 The Mercedes 190 E 2.3-16 used by Niki Lauda during the 1984 Nürburgring Race of Champions has appeared for sale in the AutoClassics classifieds

To celebrate the inauguration of the new Nürburgring Grand Prix circuit, promotional events filled the weekend’s schedule for mid-May 1984. Joining in to promote its new car, Mercedes-Benz organised a friendly race with a multitude of racing legends across several generations of Formula 1 – Ayrton Senna and Alain Prost were both in attendance as the only drivers not to have claimed the world championship. Little did they know what history was to have in store for them.

As the sun gently brushed the tarmac on the morning of Sunday, May 12, the roar of pre-war machinery filled the skies as Juan Manuel Fangio demonstrated the raw agility of the heritage fleet. Whereas Hermann Lang – the Mercedes factory driver during the 1930s – tanked around the circuit in a W154 Silver Arrow. However, the real event was still to come.

The 1984 Nürburgring Race of Champions was set not just to showcase the new Benz in the most exciting possible manner, but also to settle the ultimate petrolhead’s pub argument – who was the greatest driver if all the cars were the same?

Taking to the track in a fleet of Mercedes-Benz 190 E 2.3-16s, the likes of Sir Stirling Moss, Jack Brabham and James Hunt battled for position in a good-natured fracas rife with overtaking and Cosworth-engined mayhem. The cars were largely stock with only minimal race preparation – but they captured the public’s attention and refused to let go.

As soon as Senna crossed the finish line to claim first place, with Niki Lauda hot on his heels with glowing brake discs, the 190 E 2.3-16 was a confirmed automotive icon. Set to hang off teenagers’ bedroom walls and adorn every dream garage, Mercedes had no trouble in finding each production example a new home.

Witnessed by hundreds of people and now enjoyed as an event of legend, finding one of the iconic racing vehicles from that day tops the majority of most Benz enthusiasts’ bucket lists. They rarely appear despite wealthy aficionados spending hundreds of man hours seeking contacts and following leads.

Quietly residing in the classifieds is the very Mercedes driven by Lauda himself – in perfect working order; still wearing its original livery and boasting very few miles. The interior has kept the specially-installed racing seats, too.

In road going trim, the 190 E 2.3-16 churned out 185bhp at 6200rpm and 174 lb-ft of torque at 4500rpm – the oversquare 95.50 x 80.25 mm bore and stroke dimensions ensuring a clean range all the way to the 7000rpm readline. With the engine in such rude health, there is no reason why the four-cylinder Cosworth beast couldn’t give you the same adrenaline pump as Lauda would have experienced 34 years ago.

Available through Jan B. Lühn, the hugely desirable Benz won’t hang around for long. The asking amount is Price on Application – but expect to pay anywhere in the region of £100,000 to £200,000. Money well spent.

Get a closer look at the classified advert here.