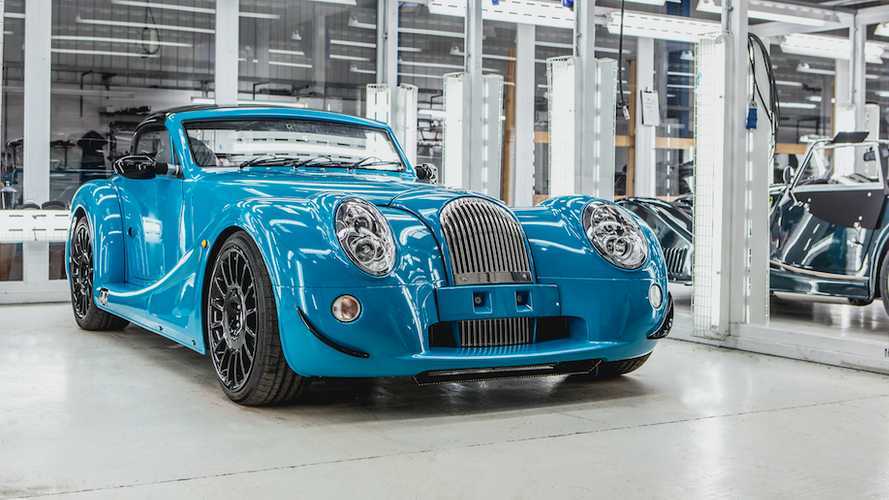 As revealed at the Geneva Motor Show, Morgan’s Aero GT – the company’s most extreme road-going model to date – captured the public’s imagination and set the fan scene alight. Now, the first edition has rolled out of the factory, and is destined for Revolutions Morgan in Scotland.

Only eight of the special Aero GT variants are set to be crafted, with each one tailor built to bespoke customer specifications. Celebrating the lifespan of Aero 8 production – which started with an original run from 2001 to 2010, before a 2015 revival – the final incarnation of the Morgan stalwart represents a significant piece of the marque’s history.

Under the bonnet rests the same 367bhp BMW N62 V8 as is employed in the contemporary Aero 8; the GT is capable of 0-60mph in 4.5 seconds before charging on to a top speed of 170mph. All eight examples will be built with Morgan’s latest adjustable suspension, while their manual transmission is in keeping with the sheer, raw driving experience expected from any Aero 8.

Should you be thinking about snapping up one of the seven remaining examples, you’ll be treated to an individual consultancy with Morgan’s head of design Jon Wells, before the car heads down the production line.

Managing director Steve Morris said: ‘Every Morgan is built to an exacting specification and is bespoke to each customer. The first Aero GT off the production line looks superb in every way.

‘It was a pleasure to reveal the car to the world just a few weeks ago. To see the first car leave the factory is an honour, and I know the new owner will be delighted when they take delivery.’

While – thanks largely to the ill-informed ramblings of certain BBC motoring journalists – it’s easy to imagine that the Morgan factory continues with assembly methods first utilised before World War Two, each body panel is actually created with the technologically advanced Superforming process now synonymous with modern Morgans. The panel is then hand-finished and crafted into Aero GT sections.

How does the Aero GT differ from the standard Aero?

Besides an interior that’s been hand crafted with a series of extended wood options and painted stitching mated with pinstripe accents, special enamelled ‘GT’ badges signify the model variant. Each one is individually hand made by a strictly selected British jeweller.

While the engine is shared with its standard brethren, the front canard details and wing-top louvre vents have been proven to reduce low pressure on the body sides. This provides a notable difference in frontal downforce.

It’s a similar story at the back; the new diffuser reduces air pressure from beneath the vehicle, increasing rear downforce. This also reduces the rear end’s visual weight.