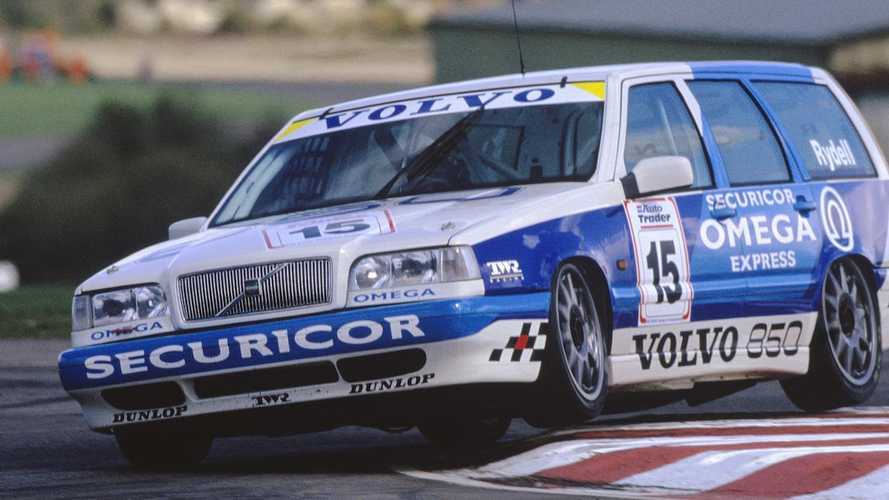 One of the amazing Volvo 850 Estate used in the 1994 British Touring Car Championship is currently being rebuilt by Jason Minshaw.

Minshaw, who also races an ex-Rickard Rydell S40 Super Tourer, found it in Holland where it had been running as a saloon.

He is now taking it back to period estate specification but does not plan to race it due to a lack of spares.

'I will run it in demonstrations,' said Minshaw. 'I’d like to have it as a rolling shell to be on display at the Silverstone Classic.'

Chassis 3 is one of three cars built for the car’s only season in 1994, when the 850 estate model was raced exclusively in the BTCC. Gregor Peterson in Sweden has Chassis 1 and Chassis 2 is in a museum in Gothenburg.

'Publicity-wise it was an incredible stunt by Volvo,' added Rydell. 'Indeed, people still talk to me today about racing the 850 estate. It was pretty scary at first as we had done virtually no pre-season testing, but we made it more driveable and somewhat more competitive as the season progressed.'

Jimmy McRae, Juha Kankkunen and Antonio Zanini are among the stars gathering for the Rallye Festival Trasmiera (May 10-12) in the Cantabria region of northern Spain.

The event includes 165 cars up to first generation World Rally Championship cars, with 35 going from the UK via the event’s UK agent Gary Gee. The route covers around 60 miles of stages over three days, starting on Thursday evening and finishing on Saturday.

'They charge €1 per person to go into the service park and last year they took €54,000 for charity,' said Gee.

'They have fantastic cars on the event and even the road sections are lined with people. You can go as fast or as slow as you want on the stages.'

Gee is taking his ex-works Lotus Sunbeam with Ian Grindrod as co-driver while other entries include spectacular Irish hero Frank Kelly in his Ford Escort Mk2.

Kankkunen and his former co-driver Nicky Grist will be their 1994 Toyota Celica, which has recently been restored by Warner Lewis.

While McRae reckons that a British version of the closed road demonstration event could now be feasible.

'I did it last year in a [Opel] Manta 400 and I think it is a fantastic event,' said McRae. 'The crowds are just unbelievable and it’s a lot of fun. The stages are very nice. You can drive however you want to drive and that’s what is so good about it. Hopefully now we have closed roads we could have something like it here, which would be great.'

Formula 1 cars from more than 50 years will form the central theme of this year’s Classic Nostalgia weekend at Shelsley Walsh (July 28/29).

F1 Through the Ages will draw a range of grand prix cars to the Worcestershire hillclimb venue and a dedicated paddock will be filled with both modern day and classic F1 cars.

Some of the cars will take to the 1000-yard hill and details of the cars attending will be announced over the coming weeks.

The weekend will also feature rally cars from the 1980s and 90s in the new Ralli22 speed event series as well as a full entry of other pre-1980 cars.

Two Frank Williams Racing March 712 Formula 2 cars are due on the Historic F2 grid this season. Historic FF2000 racer Jeremy Caine is making progress getting his ex-Williams 712 ready to race, while Swiss racer Hansueli Christen is having the ex-Pescarolo Politoys 712 prepared ahead of some races later this year and a full season in 2019.

The Classic Sports Car Club will start its 2018 race season with over 330 entries at Snetterton this weekend. Among the grids are strong fields for the Classic K series, which features 30 cars, and the Swinging 60s entry, which has been split at two-litres into two races for a total of 60 cars.

F5000 to star as American SpeedFest

The Formula 5000 cars from Derek Bell Trophy will have two stand-alone races at the American SpeedFest at Brands Hatch on June 9/10. Previously, the mighty five-litre single-seaters have run demonstration sessions but will now race on the Indy circuit and a grid of up to 15 cars is expected.

Entries have now opened for the Red Kite Stages which will run in the forests of South Wales on Sunday 24 June. Round four of the MSA British Historic Rally Championship will run to the new Rally 2WD format and competitors can reserve a place with a £50 deposit. All places secured with a deposit will be held until May 24 when the balance of the fee must be paid.

Successful Chevron to appear at Donington

Will Schryver and James Hadfield will team up to contest Saturday’s Guards Trophy race at Donington Park in the Chevron B6 owned by Will’s father Michael. The Chevron, which Schryver senior has owned for more than 30 years, won countless races in the hands of the owner and Simon Hadfield but has now been entrusted to the two sons.

The date of the summer round of the Historic Sporting Trials Association schedule has been amended. The event planned for August 18 in Hertfordshire has been brought forward to Saturday July 28. With many Historic Sports Car Club racers planning to support the Mondello Park 50th anniversary meeting on the August date, the trial has been moved forwards three weeks.

British GT champion Jon Minshaw had added a Jaguar XJR9 Group C car to his stable and hopes to race it this season around his British GT commitments. The 1988 Le Mans cars was previously entered by JD Classics and is now being tended by Wrexham-based Valley Motorsport, the team behind several of Minshaw’s historic race cars.