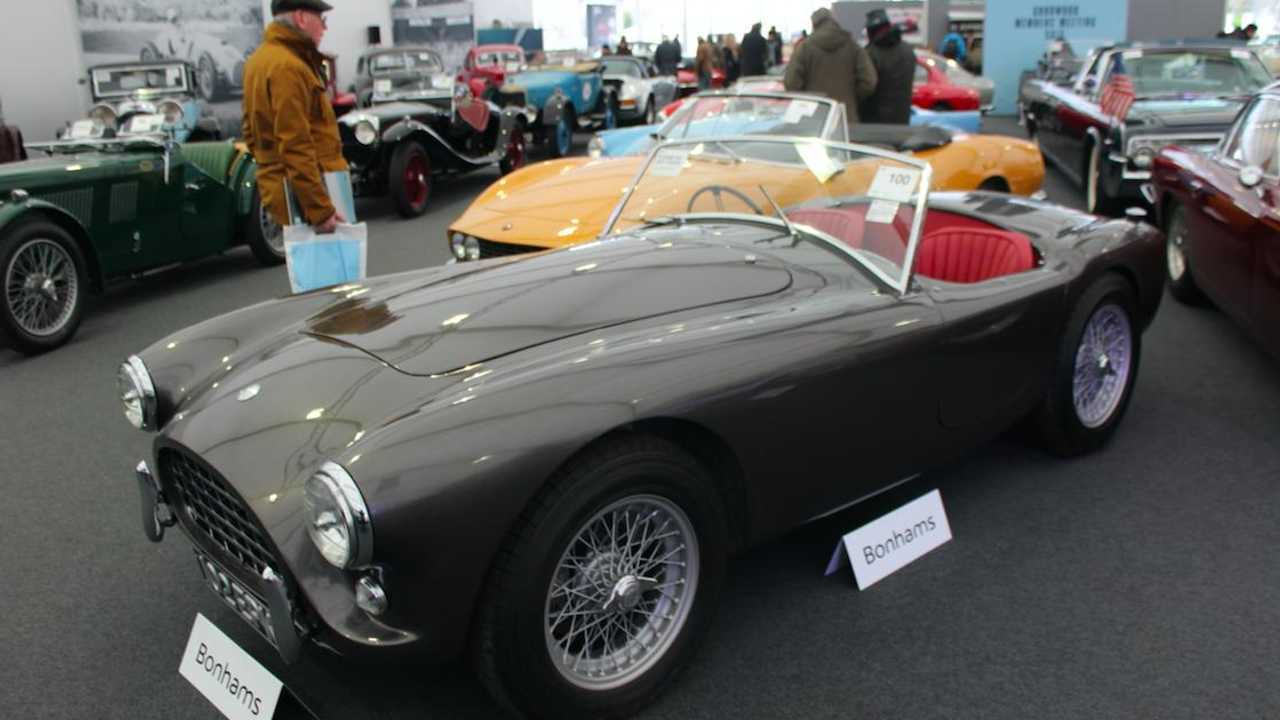 After 1967 and 1991 Lamborghinis with McCartney and Stewart pop provenance failed to excite buying bids, the starring role in the Bonhams Members' Meeting auction at a snow-hit Goodwood was played by a 1958 AC Ace (above).

With AC’s own engine rather than a Bristol or Ford power unit, the 1958 Sports was keenly contested until it sold for £204,220 including premium, £84,000 more than the top estimate and a milestone price for this version of the model.

Another AC from the collection of the late John Davison – a 1937 16hp 2-4-6 Coupe (below) with Dickey and a Jaguar XK 3.4 engine and gearbox fitted, but with original AC engine and transmission included - also inspired a full house of telephone and internet bidders until hammered for £34,500, the winner paying a more than treble guide price of £39,675 with premium.

There were buyers for many of the pre-WW2 cars in the sale, such as an Ian Polson maintained 1936 Talbot BG110 Tourer with aluminium coachwork by Vanden Plas which realised a within estimate of £113,500. A 1927 Amilcar CGS Type S Voiturette, pro-restored in the US twelve years ago and recently refreshed in the UK, was also much admired and sold for £68,700.

Proceeds from the sale of thirteen cars belonging to the late Brinley ‘Brin’ Edwards, most of them Lancias and all auctioned ‘Without Reserve’, benefited the RSPCA. Part-restored, though in need of finishing, Edwards’ 1956 Lancia Aurelia B24 Convertible with Hardtop was taken on for a below forecast £158,300, whereas the £126,400 paid for his 1933 Lagonda M45 2-Seater, last driven in 2013, was more than expected.

By contrast, the right-hand drive Ferrari Dino 246GT Spider first owned by Pink Floyd drummer Nick Mason in 1974 had been Classiche certified, but could not muster the £375,000 minimum suggested on a bitterly cold day in a confirmed to be cooling market for the marque.

So it was left to an Alfa Romeo factory-built in 1965 and period-raced Guilia Sprint GTA (below) to be the top selling Italian with a £189,700 result. An early Fiat Dino Spider from 1968 with the lighter, all-aluminium 2-litre engine and rare hardtop also sold for £100,060, mid-estimate money.

The 22nd Morgan Plus 8 to leave the Malvern works in 1969 had been totally rebuilt in the US with chassis and timber framework beneath renewed aluminium panels. Sporting a John Eales Developments Rover V8 and full complement of current safety equipment whilst at the Richard Thorne workshop following repatriation, the FIA Period G1 1966-1969 compliant event-ready minter even had a spare 288bhp engine included for the £61,980 with premium bid by the winning contestant in a woolly hat.

An equally British 1963 Turner Mk2 with rollcage inside a hardtop, powered by a Ford 1650cc engine rebuilt by Geoff Richardson four seasons ago, also looked historic action ready for £17,250.

Whilst no commoner with £25,000 or so could be found for the DB7 Volante manual that had been originality built in 1996 for HRH Prince Andrew, Duke of York, £130,300 was forthcoming however for a 1959 DB MkIII (below), a late disc-braked fixed head with overdrive restored by Aston Service in Dorset in the 1980s that had been prepped for long distance road rallying.

Bidding for the most probably better than new in 1937 Alvis 4.3-Litre ‘Short Chassis’ Vanden Plas Tourer, which had been much evented during current Royal Automobile Club ownership was abandoned at £390,000, with £420,000 or more having been sought.

The other rostrum flanking headliner, the equally well-presented Jaguar SS 100 2½-Litre Roadster formerly owned by Jaguar Cars Chairman Sir Nick Scheele, also ran out of interest at a below estimate of £225,000. But after many recent attempts, the Mk X saloon (below) that was specially built in 1961 for the daily use of Jaguar founder Sir William Lyons and had been restored at Miles Classics by 2017 was successfully hammered away at Goodwood for £48,300.

Once again, a Fast Ford pulled well in the cold, a 1980 Escort RS2000 Custom with 31,713 mileage that had been recently re-commissioned following long-term storage fetching £40,250, top estimate money. By the end of the Sunday afternoon session under up-market canvas in Siberian Sussex, £3.6m had been invested in the futures of 75 or 72% of the 104 cars in the Bonhams catalogue. Good going on a bitterly cold day.

More on the Members' Meeting

For the full report on the Goodwood Members' Meeting, and the trials and tribulations of racing in the snow, click here.