Action in the snow at Goodwood 76th Members' Meeting 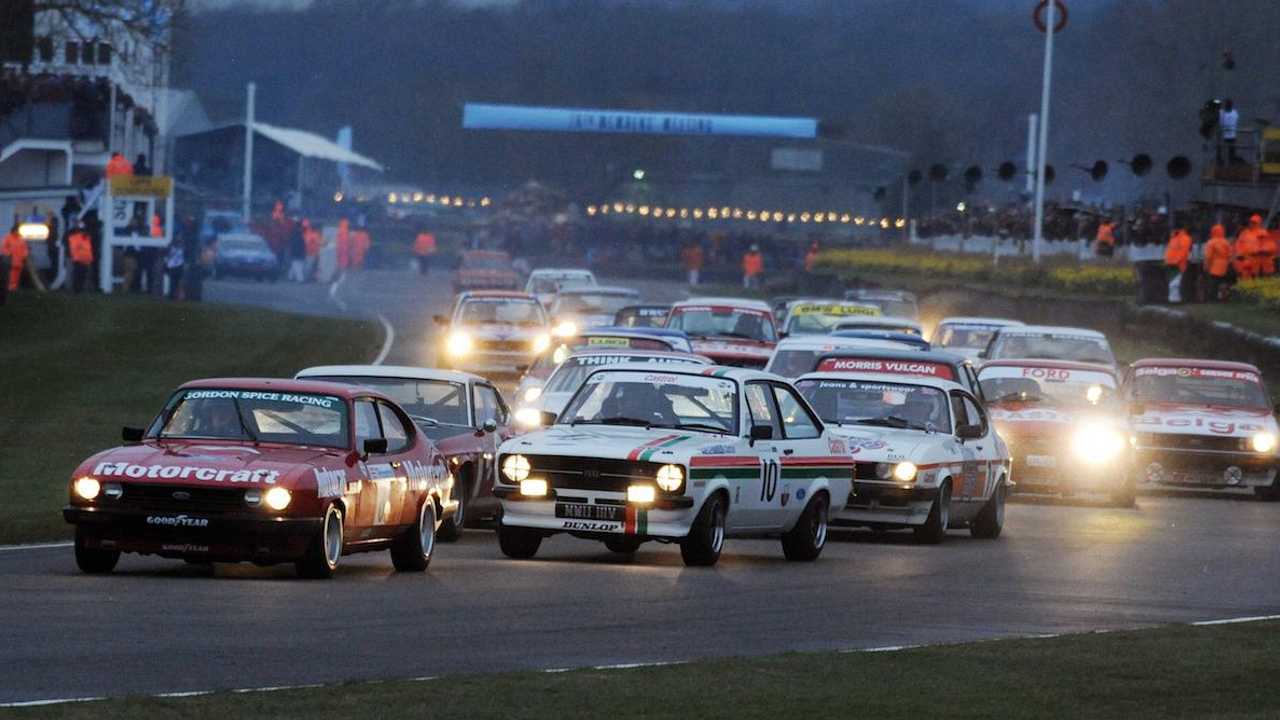 Immensely diverse grids and a host of professional drivers ensured plenty of spectacular racing at the 76th Members' Meeting, despite freezing cold conditions

Former grand prix star Mark Blundell took the chequered flag in the Ford Escort RS2000 he was sharing with Kerry Michaels. The 1970s and 80s touring car race has established itself as ‘the one to watch’ and it duly delivered as day faded into night on the first day.

Mike Whittaker was fastest off the line in the Motorcraft Capri with Michaels holding second around the outside into Madgwick, slotting ahead of the Mustang Boss 302 of Craig Davies. Former British Touring Car Championship driver Mike Jordan took over the Capri for the final stages, leading Blundell after the round of pitstops. But as the pair came to lap the Fabergé Capri of ex-Formula 1 driver Jochen Mass, Blundell made his race-winning pass. BTCC 1992 champion Tim Harvey was third in the Malboro Rover SD1.

Mini Ace Nick Swift was visibly frustrated by the lengthy run behind the safety car during the Gerry Marshall Sprint race for the car’s owners, gesticulating wildly from the cockpit of the Patrick Motorsport 1275 GT. Peter Mallett was the unfortunate victim of a mid-pack concertina and his Daily Express SD1 duly left the circuit and shunted the tyre wall. Pantelis Christoforou held onto first place at the restart, doubling the tally for RS2000 victories.

Long before the green flag for the two-driver Moss Trophy, it was clear that five-time Le Mans winner Emanuele Pirro driving the unique Ferrari 250GT ‘Breadvan’ was always going to star.

From eighth on the E-type-littered grid, Pirro diced his way to the front to join the battle for the race lead with Jon Minshaw and the Young’s E-type Fixed Head Coupé. After the round of stops, owner Martin Halusa couldn’t match the ultimate pace and so the Breadvan fell back to to third, ahead of Anthony Reid whose stint in the 250GT SWB was spectacular – fully deserving of an eventual fourth. With Minshaw’s co-driver being British GT champion team-mate Phil Keen, over the 50 minutes they were good value for their near-six second winning margin in a 1961 E-type roadster.

David Hart made a lightning start on the outside of the Gurney Cup grid to jump his Ford GT40 into the lead heading into Turn 1. Despite having only purchased the ex-Willy Mairesse car three months ago, he seemed to have quickly established an affinity with the car as his drive was near-perfect.

Where David was neat, son Oliver was wild in the Shelby Daytona Coupé. He battled up to third in spectacular fashion, seemingly oversteering for the entire duration at an ever-increasing angle. Andrew Smith split the pair in another Daytona, three seconds off the leader.

Pre-1958 grand prix cars were the first out on the snowy Motor Circuit to kick-off Sunday’s running with the Hawthorn Trophy. It was Tony Wood who looked most at ease with the slippery circuit as he calmly won in his Cooper-Bristol from the 1955 Maserati 250F of Eddie Williams – his first race with the car.

James Cottingham claimed the spoils in the Ronnie Hoare Trophy opener as Vincent Gaye’s charge for the lead was cut short as he span his Ferrari 275GTB/C across the infield. Gaye then Cottingham led the 1963-66 road-going sports and GT car field away at the start, before Cottingham pulled clear in the Phil Hylander-owned Porsche 904. But on the penultimate lap, as Gaye began to reel in the leader, he dropped a tyre onto the grass and spectacularly ended hopes of a potential last lap battle.

Fast-starting Christoph Widmer was fortunate not to be collected by any of his Derek Bell Cup competitors as he spun across the track at Fordwater. That relieved the pressure on Jon Milicevic who headed a depleted one-litre Formula 3 field.

On paper, the result of the Sears Trophy looked a foregone conclusion: 2013 BTCC champion Andrew Jordan sharing with his BTCC race-winning father Mike in the Lotus Cortina built by their own company taking the spoils in the 1963-66 touring car race. Andy Wolfe was second of the Cortina-dominated grid with Mark Sumpter rising 15 places to round-off the podium places.

Historic ace Martin Stretton profited from Minshaw’s spin aboard his Lister-Jaguar to take Salvadori Cup honours. The polesitter made his mistake on the opening lap and from there Stretton saw-off charges from the Lotus 15 of Oliver Bryant and Roger Wills as they battled Andrew Smith in his Lister.

Timed seem to slow for Stephen Gentry as he struggled against an errant rear end on his Bugatti Type 51. Plenty of corrective steering wasn’t enough to stop the grand prix racer from sliding onto the grass. At that point Gentry was just a passenger before headbutting the barriers. Patrick Blakeney-Edwards was in a class of his own from thereafter, comfortably winning the Caracciola Sportwagenrennen from Duncan Pittaway, despite the latter racing a lightened Type 35 following the Bugatti shedding its bonnet.

The Bolster Cup, running for British hillclimb specials, was won by Tim Llewellyn who started way down in 15th. After 12 laps he held a comfortable four second lead in his 1926 Bentley 3/8.

Throughout the weekend a healthy contingent of Formula 5000 cars took to the circuit in celebrations of 70 years of the series. The high-speed demonstration laps were complimented by a ‘minute of noise’ with drivers revving their engines to honour the passing of Henry Hope-Frost – considered by many as ‘the voice of Goodwood’. Many competitors also added #Fever stickers to their cars as a mark of respect.