Incredible automobilia collection up for auction this Saturday 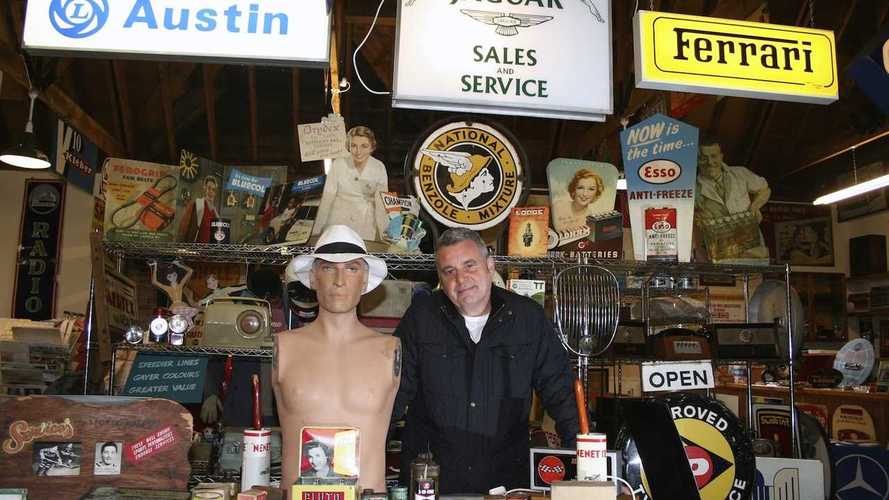 Want to get your hands some rare automobilia? Now’s your chance, as choice goodies from the world-renowned Themed Garages set and prop-hire company are soon to go up for auction.

Themed Garages has been dressing events such as the Goodwood Revival for the past 13 years, using items from its vast collection. It’s had commissions from the likes of Rolls-Royce, BMW, Mini Motorrad, Jaguar and Michelin.

However, company boss and automobilia enthusiast Stewart Imber (above), who has been collecting for 43 years, now wants to slim down his magnificent range of artefacts, some of which are shown below.

Around 140 lots, including period 1950s and 1960s items as well as reproductions created for TV and film, will go under the hammer at the Cheffins Cambridge Vintage Sale on April 21 – the biggest sale of its type in Europe.

Star items include a Raleigh eight-bike rack with enamel sign – previously used in the Goodwood Revival Tour de France set – which is estimated to go for between £1500-£2000.

AutoClassics has visited the collection – and it's remarkable. The pictures show just a small extent of it, not all of which is for sale. But you get the idea...

Stewart says: ‘The lots have been used in various specialised Goodwood Revival sets, while other items are from my personal collection. The collection is vast, so now is the time for me to part with some of these wonderful collectables and hand them over to new custodians.’

He continues: ‘It is getting harder and harder to find quality automobilia collectables. The market is showing no signs of slowing, and items that might have been £50 a couple of years ago are now making £250. I’ve also seen an increase in the number of agencies requesting props for interior photoshoots and film sets. The American market is red hot at the moment, with collections reaching million-dollar figures.’

Director of the Cheffins auction house, Jeremy Curzon, adds: ‘This is a fantastic opportunity for collectors to acquire some very fine and rare items, as well as some enormously creative pieces that have been on display at Goodwood. We are very pleased to have been entrusted with sale of a good number of these extraordinary set props as well as making some inroads into Stewart’s personal collection.’

The Cheffins Cambridge Vintage sale will take place on Saturday 21 April from 9.30am, at Cheffins Machinery Sale Ground in Ely. See here for more information.