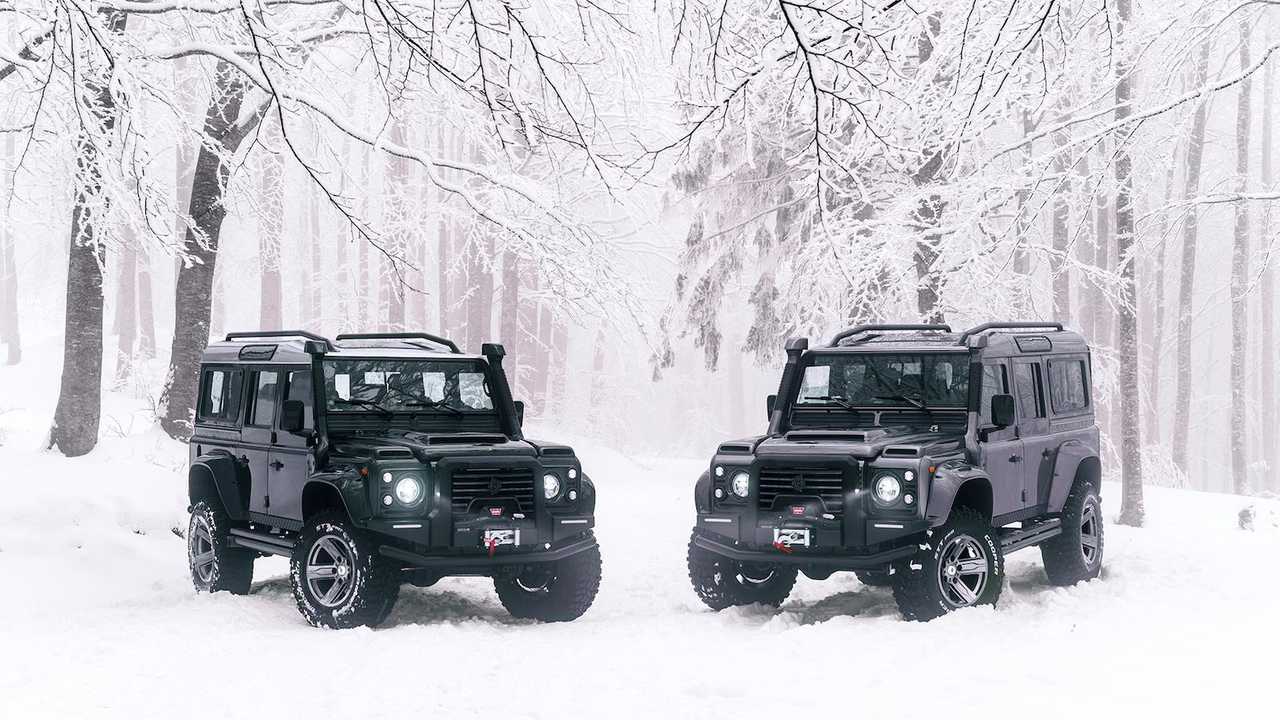 They cost over €200,000, but with a choice of 475bhp supercharged or 282bhp V8 and bespoke interiors, these could be the best Defenders yet

Funny that two top-end Land Rover V8 conversions, highly spec’d and rebuilt from chassis up, should come along at the same time, from two very different companies. Almost like buses – although significantly faster, better looking and more entertaining...

Turns out that ARES Design has already built several examples from a single order of 53 Defender V8s, all near-identical in appearance but to two distinct mechanical specifications: normally aspirated 4.8-litre V8 with six-speed automatic transmission and electronic differential locks front and rear in addition to the lockable centre diff; and supercharged 4.7-litre V8, also with six-speed auto, retaining the lockable centre diff but with a limited-slip rear differential.

The look of the ARES Defenders was designed by the customer, thought to be based in France. His initials are JCB, which are moulded into the front grille; nothing to do with the JCB heavy plant company in case you’re particularly eagle eyed.

But – and here’s the final twist – although the vehicles are being assembled in Modena, the mechanical specifications were set by JE Motor Works, a branch of the long-established and highly regarded Land Rover specialist JE Engineering in (wait for it…) Coventry. Funny old world.

The project has been secret until now, but we were allowed access to, and test drives in, two of the recently completed Defenders around Modena.

They feature carbonfibre add-ons, most notably for the front grille and the wide wheelarches, although the bonnet is also carbonfibre with a larger bulge to clear the V8 below. Side-protection bars and heavy-duty bumpers, with a Warn winch on the front, add extra purpose – although not a fraction of the purpose that is lent by the growl of the much-modded Rover engines. Wow!

JE Engineering has been building hot Rover V8s since 1975, including units for the Dakar Rally works Range Rovers and the renowned Bowler Wildcats. Managing director and chief engineer Jonathan Douglas has been involved since the early 1990s; questioned on the engines at Modena, he reels off figures without a thought: the various bore and stroke combinations considered, cubic capacities, compression ratios, power, torque…

JE can fit Defenders with 650bhp Roush-supercharged, Ford Mustang Coyote 5-litre V8s should you really want, but the brief here was for a more practical and appropriate combination of performance with driveability and longevity. Consequently, the spec settled upon was an overbore of the Range Rover V8 – fuel injected of course, and supercharged for some of the 53 vehicles in question.

The supercharged units used are based on the first generation Jaguar Land Rover four-cam 4.2-litre V8s, known as ‘AJ’ V8s. JE build a 4.7-litre version of those engines but are also in the process of enhancing the supercharger set-up to reduce inlet manifold temperature, which will be especially beneficial in hotter climates.

So you want to know if they’re fast? Well, please remember that these cars weigh two tonnes, and we all know Defenders have the aerodynamics of a house.

But yes, they’re fast! Not supercar fast, but capable-of-embarrassing-a-hot-hatch fast. Perched up high in the Defender’s cabin, that feels more than fast enough and as entertaining as it’s improbable.

In fact, so much about the experience is improbable – even taking away the surprise of finding 53 chunky Defenders at a plush modern coachbuilder’s premises, alongside two-door coupé Bentley Mulsanne conversions and rebodied desert-spec G-class Mercedes. An example of both versions of the Defender is here: the supercharged model in dark grey, the normally aspirated one in dark blue. Both look equally classy and sinister; we choose the 475bhp supercharged version first.

The driver’s door opens easily and smoothly, to reveal a tasteful interior of dark leather and carbonfibre. The alloy step is necessary, thanks to the extra 100mm of ride height, and once you’re in, the door closes first time, without the usual bounce off the rubbers. If you know Defenders, you know that’s a big deal.

The ignition key, as ever, is tucked down on the left of the steering column, and leg and shoulder room is as limited as its always been. However, as the Defender has served beefy farmers and squaddies for decades, it would be churlish for a skinny keyboard jockey to complain.

Quick twist of the key, pull the glossy gearlever backwards into Drive, a check that the electronic handbrake is off, and we’re away, already rather more rapidly than expected, although the rev-counter needle has barely troubled itself to move above idle speed.

We ease out of the factory, the usual Defender limited steering lock making the tight corners trickier to negotiate than they should be – thank goodness for the power steering. Then it’s out onto the bumpy roads of the industrial estate.

More gas, and the Ford transmission slips into second while the exhaust blares. My goodness it sounds fantastic, although it can be toned down by closing off the exhaust-bypass valve. The ride is firm but – again – if you know Defenders, you know that the ride is always firm. What distinguishes this one is that it’s free from clonks and shakes.

There’s another thing, too. A standard Defender will wander a little on the road, a symptom of long-travel suspension, tall, deep-treaded tyres and a decades-old design. They’re great, but they are flawed. Raise the suspension and add still taller, knobblier tyres, and usually a Defender will wander some more, in almost Vintage-car style.

The ARES Defender wanders but no more, perhaps less, than a stock example. That’s quite an achievement with those huge wheels and tyres and the 50mm raise (which combined equates to the increase in ride height of 100mm).

Jonathan explains that many hours have been spent perfecting the geometry of these models. A raised height always compromises stability on a Defender because it puts the Panhard rod at an angle, but the JE Motor Works development seems to have got it as good as a raised Defender will be – though they point out that the same work on a standard-height Defender and its stock wheels really makes an improvement.

The result of that work is that the suspension now uses JE Motor Works bespoke springs with heavy-duty Fox dampers and revised anti-roll bars. Meanwhile, the brakes are by AP Racing, the fronts being hefty 362x32mm discs and six-pot calipers.

On the autostrada outside of Modena, the ARES Defender is hilarious – especially when the inevitable impatient driver comes tearing up to the rear bumper, headlights flashing, swerving from side to side in a futile effort to find a way past. Like swatting away a fly, all it takes is a footful of accelerator and the Defender leaves impatient-little-man in its wake, almost certainly deeply confused.

It’s so much fun, but it’s practical, too – a Defender that you really could drive for hours without inducing ear-ache and everything-else ache. It’s no limo, but the addition of copious amounts of soundproofing and high-quality leather and carbonfibre trim has made for a rather more civilised environment than your typical Defender owner will be aware of.

The seats are wonderfully supportive bespoke Recaros, trimmed in leather, of course, and there’s a leather headlining and a Webasto sunroof, which provides an airiness usually unknown in a Defender. On the floor is aluminium chequer plate, because thick carpet would still feel inappropriate in a Defender, don’t you think? Of course there’s a top-spec in-car entertainment system, too, with sat-nav and Bluetooth.

And the normally aspirated version of the ARES Design Defender? It’s not as powerful, at 282bhp, so of course it’s not as fast as its supercharged stablemate, but it’s no slouch, either, and it’s wonderfully torquey. In many ways it’s the more sensible option, especially for off-road use, because it does everything so incredibly well.

This batch of 53 is well under way, as the long line of Defenders in various states of undress in the ARES Design factory demonstrates. After that, other customers will have their chance at similar specifications. As a guide, these cars cost around €200,000-250,000, which is probably the most anyone has paid for a bespoke Defender. But so far we’ve never come across one this well developed.