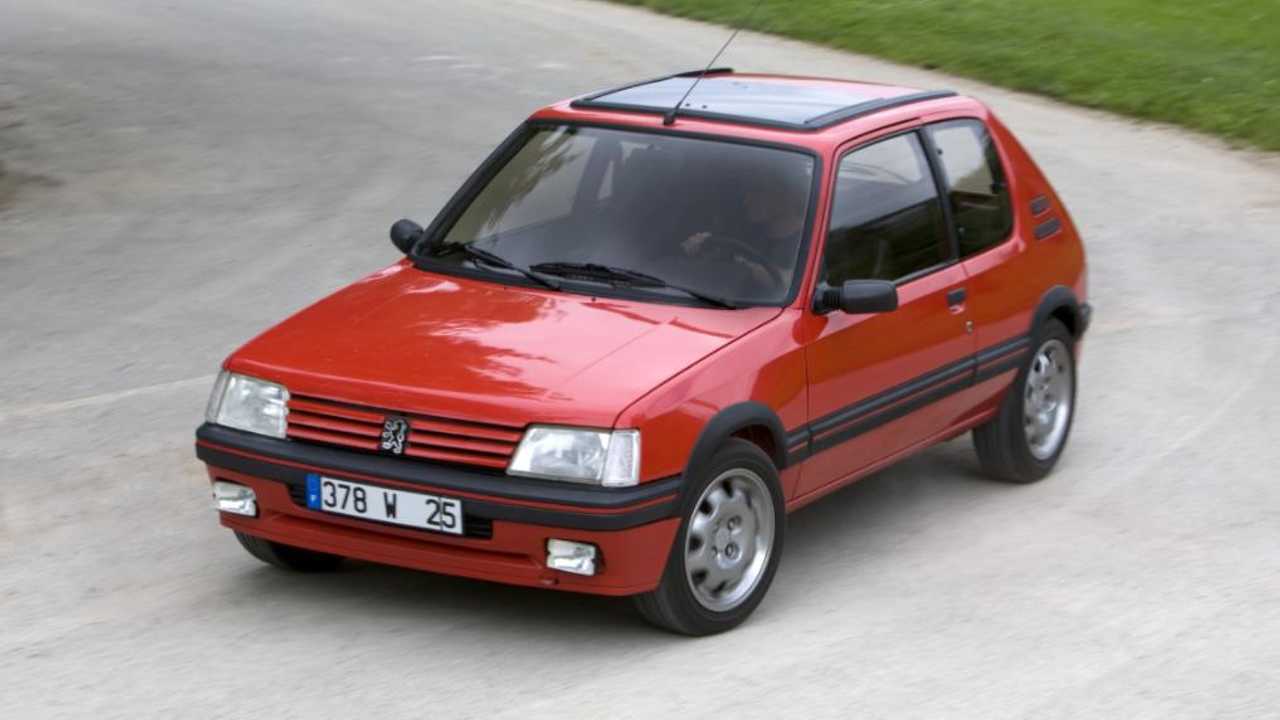 The 205 helped Peugeot recover financial dignity during the early 1980s – and the GTI became one of the best-loved hot hatch icons of the period. To appreciate the 205 GTI is to appreciate Peugeot at the height of its automotive powers; it embodied everything that was right about the ‘05’ model range.

Wrongly credited to Pininfarina, the 205 was styled in-house by Gérard Welter working with some of the Italian design house’s themes in mind. Batista’s company helped design and build the popular 205 CJ, CT and CTi cabriolets, however, so all was not lost.

A combination of light weight, reactive handling and excellent running gear helped foster the 205 GTI legend. The forward-canted XU engines improved traction and made the best of an otherwise heavily front-biased layout.

If you knew how to exploit it, the 205 GTI could embarrass far faster cars in period; the lift-off oversteer that consigned many to an early grave on a back road rewarded sensitive hands with rapid progress through the bends.

The 205 GTI bottomed out in depreciation some years back, but collectors are now of the right age to rediscover it with vengeance. Record prices are being asked for the best cars – the days of £500 GTI 1.9s, body kits and track-day hacks have long since passed.

Thanks to an aluminium-alloy block and an aluminium head, weight was kept to a minimum in the GTI. All three engines used Bosch’s L-Jetronic fuel-injection system; early GTI 1.9s were known for their driveline shunt in traffic, which was quickly resolved.

Peugeot saved 16 valves for its fire-breathing 405 Multi Injection 16 (Mi 16) range-topper. This XU unit was never fitted in the 205 GTI by the factory in period, but plenty of enthusiasts – along with the Peugeot UK Academy – subsequently carried out the coveted transplant.

All units are strong in service, and easily capable of 150,000 miles if correctly maintained. Issues to look out for? Valve-stem oil seals can fail prematurely, while timing belts (used on both 1.6 and 1.9-litre engines) can stretch and snap if pushed past their replacement intervals. Meanwhile, camshafts can go ‘soft’ if denied regular oil changes, causing a drop in power output. It’s always worth checking whether a genuine Peugeot oil filter has been used, too, either branded as such or in Purflux packaging – both are original equipment. A non-return valve in these filters ensures full oil pressure from start-up.

Two gearboxes were used throughout production: Peugeot’s BE1 and BE3. These units used steel rod shift linkages designed and manufactured by Peugeot itself.

You can identify each unit by locating reverse gear: the BE1 is up and to the left with a pull-up collar, the latter BE3/5 – fitted from August 1989 – dispensed with the collar and had reverse down and to the right, opposite fifth gear. GTI 1.6s featured shorter ratios, leading to a spate of 1.6 to 1.9 transmission swaps back in the day in order to improve in-gear acceleration.

Neither unit will fail unless abused with a lot of extra power, or rough treatment. Gearknobs, particularly on pre-1989 cars, become brittle and fall off, while linkages can get rough if they’ve never been serviced.

The GTI, as with all 205s, used a compact independent rear-suspension unit, comprising trailing arms, transverse torsion bars and short, angled dampers. Having established the basic principles in its 305 S2 estate, Peugeot further refined the design for the 205, dispensing with the earlier car’s horizontal spring units.

As with its gear linkages, Peugeot also manufactured its shock absorbers in house. These were stiffer for the sporting 205s, and the GT and GTI also received an anti-roll bar and, in the case of the GTI 1.9, rear disc brakes. The art of stopping is never really an issue long term – save for the handbrake, which can often cause an otherwise good GTI to fail its MoT. Handbrakes regularly go out of adjustment; full strip and lubrication rebuilds are the only way to keep them behaving as intended.

The model’s tight packaging allowed for easy maintenance and a flat boot floor. Bushes and other components can fail over high mileages, leading to ‘interesting’ amounts of camber on each rear wheel. GTI ‘beam’ swaps into lesser 205s were popular in period, and while the price of complete rear suspension units is rising, reconditioning services are readily available.

205 GTIs were galvanised (messily) from new, meaning they resist rust better than their contemporaries, but they’re far from infallible. If accident damage disturbs the seal, rust can find its way in. Incidentally, cars fitted with sunroofs are slightly less rigid than those without. Speaking of sunroofs, so-equipped cars have a different, less effective windscreen seal, and can rust around the screen and A-pillars as a result.

Cracks can appear between the join separating the roof and C-pillar, and rust finds its way across the back edge of the boot floor and on the wheelarches where they join the sill. Those box sections, along with the rear wings, were reinforced in comparison those for less potent 205s; if you’re lucky enough to come across a stash of new-old-stock parts, make sure the panels you’re buying are GTI specific.

Door bottoms can go if neglected, as can the front arches where the wings meet the shell. Battery trays can rust away if left unchecked, too.

From 1984 to January 1988, the 205 GTI had more in common with the 305 S2 in terms of its dashboard layout and design. Upholstery, trim and switchgear for these cars are hard to find; retrimming is sometimes your only option. Half-leather trim was standard on the launch of the GTI 1.9 in December 1986; in June that year, leather appeared on the steering wheels as well. Many GTI seats, door cards and rear benches went into lower-specification 205s after scrapyard raids.

Backed by the factory, L’Aventure Peugeot is now producing a few parts again such as gearknobs. Although the quality is good, the prices are high. Original head units are sought after, particularly in Phase 1 cars; carpets can fray, particularly in the driver’s footwell.

Practicality is a 205 GTI strong suit: thanks to that cleverly fitted rear suspension and a 50:50-split folding bench, a 205 GTI can carry a surprising amount of cargo if you’re willing to go two-up. Just watch it on the corners!

Enjoyed, crashed and abused in the 1990s and 2000s, the 205 GTI’s classic status is assured. Those who couldn’t afford them in period are now driving prices into the stratosphere, with the very best, low-mileage GTI 1.6 and 1.9s fetching a minimum of £25,000 at auction.

If you can afford to take the plunge, do it now – and rediscover a practical hot hatch icon still capable of keeping modern performance cars honest.