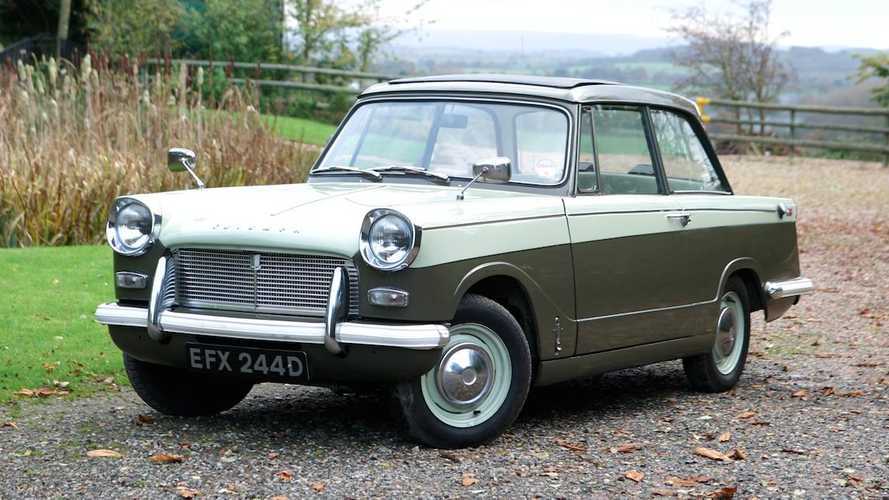 Offered with a wide range of engines and bodystyles, the Triumph Herald offers family fun for those on a budget

Even when it was launched the Triumph Herald was hardly cutting edge. With its separate chassis and a 948cc engine and gearbox borrowed from the Standard Eight and Ten, the Herald was underpowered and poorly built. Not a great start.

But in 1961 Standard-Triumph became a part of Leyland Motors and things started to improve. The wheezy engine was superseded by an 1147cc unit and an estate car was introduced to sell alongside the coupe, convertible and saloon that had been offered from the outset.

Later there would be an even more powerful 1296cc engine offered in a Herald with a restyled nose that looked similar to the Vitesse. Easy to drive with a roomy cabin and excellent visibility all round, the Herald proved a favourite with driving schools thanks to its light controls.

Part of the reason for the Herald’s comfort is its all-round independent suspension, courtesy of double wishbones up front and swing axles at the rear. It’s this latter feature that can lead to tricky handling, but despite the car’s reputation you’ve got to be going some to get into trouble – and this isn’t a car for driving on the limit.

Three different engines were fitted to the Herald, all shared with other Triumphs. The first cars got a 948cc engine, superseded by the 1200 with an 1147cc unit. This continued to be sold alongside the 13/60 with its 1296cc powerplant until Herald production ended in 1971.

All Herald engines are reasonably durable but the fitment of an oil filter without a non-return valve leads to the main bearings being starved of oil on start up. Kits are available to fit a spin-on filter with a non-return valve; they’re cheap and a very worthwhile investment.

Any of these engines will give 100,000 miles of faithful service, but if there’s rattling as you start the engine the big ends are worn signfiying that a bottom-end rebuild is due. DIY overhauls aren’t a problem thanks to the engine’s simple construction.

A chattering top end points to a worn rocker shaft and rockers, but the engine will keep running for ages before anything has to be done. At some point a top-end rebuild will be needed though.

The 13/60’s 1296cc engine can suffer from worn thrust washers, so check for excessive longitudinal crankshaft movement. If you push and pull on the front pulley with the clutch engaged you’ll be able to feel and hear for any detectable movement. If there is any the washers are worn and may even have fallen out, probably wrecking the crankshaft and block.

There was no automatic option, only a four-speed manual with no overdrive option. The first sign of wear will be tired synchromesh, although this wasn’t fitted to first gear; fitting an all-synchro Spitfire gearbox is a worthwhile option, especially if it’s an overdrive unit.

Once a Herald gearbox needs a rebuild you’ll know about it thanks to the whining, rumbling and grumbling. Rebuilt transmissions are available and it’s easy to swap a tired unit for a good one.

Differentials wear but exchange units are readily available. Clutches are strong and easy to replace while the universal joints fitted to the propshaft and driveshafts wear leading to clonks, but these are also easy to replace on a DIY basis.

The Herald’s rack-and-pinion steering is reliable and so is the suspension if it’s maintained. Up front there are double wishbones with vertical links held in place by trunnions at the bottom and a ball joint at the top. If the trunnions aren’t fed some EP90 every so often, corrosion sets in and they snap off as the wheels are turned at low speed, leading to the suspension collapsing.

The nylon bushes in the front trunnions can also wear, but like the trunnions themselves, replacement parts are available and it’s a very easy DIY repair. The rubber bushes also wear but new items are available in rubber or polyurethane.

More of a problem is worn rear wheel bearings as these act directly on the half-shaft, so if they break up, the driveshaft is destroyed. It doesn’t help that a press is needed to replace the bearings.

If the car is sitting low at the back it’s because the transverse leaf spring is tired. Although replacements are available, fitting a new one isn’t that straightforward but it’s made a lot easier by having access to the correct tool.

There was never any servo assistance for the brakes and early cars got drums all round, but most have discs up front. It’s possible to fit Vitesse items which are a bit stronger, but this means also fitting the Vitesse hubs and uprights.

When the Herald arrived in 1959 it was unusual in that it featured a separate chassis. As a result it’s this that gives the car its strength which is why you must analyse it closely. Focus on the main chassis rails, especially either side of the diff, along with the outriggers which sit behind the screwed-on sills.

Although the bodywork isn’t structural you still need to check the floorpans, door bottoms, rear wheelarches and front valance. The lower corners of the bonnet rust too, along with the spare wheel well and the rain gutters on the saloon and estate.

The panel fit can be poor because if any of the three key sections has been poorly refitted after a body-off rebuild (bonnet/front wings, bulkhead and rear tub), the shut lines will always be terrible.

Everything is available to trim a Herald to as good as new – at least where the saloons and convertibles are concerned. Some estate bits are available but anything bespoke to a coupé will be hard to track down. Also, the earliest cars got some unique bits such as rubber mats or dash surrounds but it’s all available for anything built from 1961 or so.

The lacquer on the dashboard’s wood trim can crack and sometimes holes get cut into the panel for mounting radios or extra instruments but again, everything is available on a new or used basis to fix things. It’s not a five-minute job to fit a new dashboard though.

The electrics are simple so if anything doesn’t work it’s probably just a poor earth, damaged wire or dodgy connection. All parts are available, including replacement looms.

Heralds with the 948cc engine are now rare and while they’re collectible because they’re the earliest of the breed, the 1200 is more usable and looks much the same. Coupés and estates are rare and sought after while convertibles are also desirable because they’re so charming and offer seating for four. Saloons are becoming more sought after so if you’re on a budget, one of these is the best way to go.

Most of these cars have been restored to some degree by now, which is fine if the work is done to a high standard. A full restoration will see the bodyshell being separated from the chassis and when the two are put back together this can lead to problems galore getting everything to line up, so check carefully.

A lot of Heralds have been modified, even if it’s just minor changes to improve reliability and usability. These are the cars that tend to make the best buy, especially if overdrive has been fitted. In some cases the 1.5-litre engine from the later Spitfire is slotted in to provide a car that’s usefully more powerful and longer legged with the overdrive. For usability this provides the perfect solution for regular use, but even in standard form the Herald provides plenty of fun per pound.