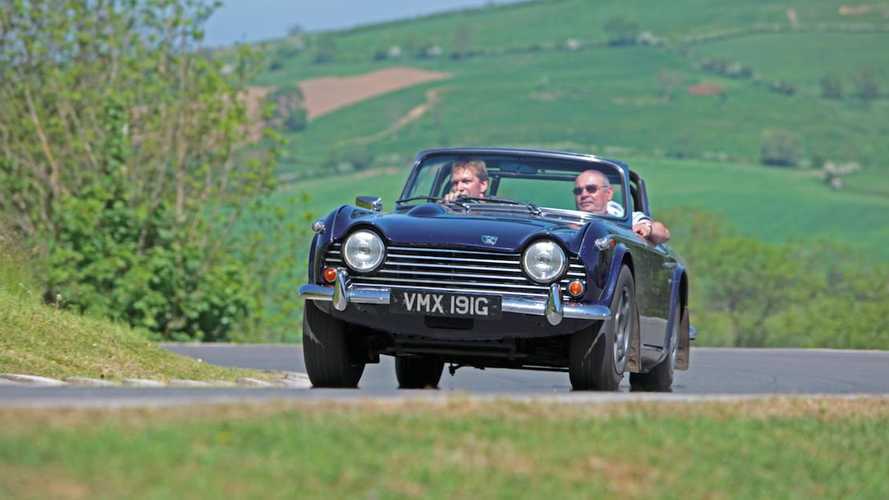 The most valuable of the Triumph TRs, the TR5 and TR250 offer classic Michelotti looks with muscular six-cylinder performance

The shortest-lived of the various Triumph TRs, and arguably the most desirable too, it’s no wonder the TR5 and TR250 are now the most valuable of the breed. With the classic looks of the TR4 but a gloriously smooth and muscular six-cylinder engine in the nose, the TR5 is an old-school classic with its effortless cruising abilities and modern-day performance.

Aside from the revised badging and a redesigned grille, along with black sills, there’s little to distance the TR5 and TR250 from the TR4A that came before, but as soon as you twist the key to fire up the throaty straight-six you know there’s no four-pot under the bonnet.

Well served by clubs and specialists, the TR5 is an easy classic to own as it’s not hard to maintain at home while parts availability is good. The mechanical fuel injection unnecessarily puts off some potential buyers but it’s this that makes the car frugal as well as muscular – as long as it’s set up properly.

Both of these cars are fitted with a long-stroke straight-six engine, with the TR5 getting Lucas mechanical fuel injection while the TR250 featured carburettors.

This engine can suffer from problems with the crankshaft end float, caused by worn thrust washers. So check for play in the washers by pushing and pulling on the bottom pulley as someone engages the clutch. There should be no more than 0.015" movement, which is imperceptible, so if you can feel obvious play and if there’s any clonking at the same time, the washers have worn and may even have fallen out, which will probably wreck the engine.

The fuel injection has a poor reputation but that’s because it’s often set up incorrectly. If it’s properly set up it will run happily for years, but it’s essential that the fuel tank isn’t allowed to run low. If it does, any sediment will be sucked from the bottom of the tank and that will go on to block up the injectors.

The TR5 and TR250 came with a four-speed manual gearbox with no automatic option, but for a bit of extra cash it was possible to specify overdrive. The gearbox is durable enough but once 100,000 miles have been notched up a rebuild will be due. By this point the chances are that the overdrive and gearbox will both be due an overhaul, but the parts are available to make them as good as new.

Feel for baulking as you change up and down the gearbox (it’s an all-synchro transmission) and if the box jumps out of gear you know there’s a problem. If the overdrive fails to engage though, it’s more likely to be an electrical problem than a mechanical one; going through the wiring for it will probably fix things, although it could also be a low oil level in the gearbox.

The clevis pin that connects the clutch pedal to the master cylinder can wear badly leading to play. Also, the slave cylinder can be mounted upside down with its bleed nipple facing down, so the system can’t be bled properly. It must point up or the clutch won’t fully engage, which will give the baulk rings a hard time.

Differentials tend to last around 100,000 miles too, but once worn it’s possible to buy an exchange rebuilt unit without spending a fortune. Any clonking is probably due to worn universal joints although it could be worn driveshaft splines. It’s possible to switch to upgraded driveshafts based on Jaguar items, which are much stronger.

The propshaft should have been greased every 3000 miles. If this hasn’t been done it can seize up, while it could be out of balance if the universal joints have been replaced and things haven’t been put back exactly as it came apart.

If the front trunnions aren’t lubricated they’ll seize, which puts a strain on the rest of the suspension, so focus on the wishbone drop links. Jack up the car underneath the wishbone and see if the trunnions are swivelling properly. If any new parts are needed it’s all available and it’s not especially costly.

Wheelbearings (front and rear) are another weak spot so listen for chattering sounds as the car is cornered and try rocking the wheel top and bottom to feel for play.

The TR5 and TR250 feature a separate chassis, but the bodyshell provides some structural strength too, especially in the sills. Check that the drain holes in the sills are not blocked; if they are, rust is probably eating its way out.

The wings and doors corrode, mainly along the top and bottom; inner wings can also rust badly. The battery tray corrodes so remove the battery for a better look; acid spills lead to the metal dissolving. Other key areas to check for rust include the B-post bases, trailing edge of the boot lid and footwells.

If the chassis has been weakened by corrosion the door gaps will open up at the top; the same symptoms will be evident if the car has been restored without being properly braced and this is a massive job to put right. Also check for the beading that should be between the rear deck and the wings. Poor-quality rebuilds sometimes swap this for filler.

If the chassis rots the bodyshell must be removed to effect proper repairs. Home in on the diff mounting brackets; these can snap off if the car is driven hard. The centre section bulges when it gets weaker and can crack where the rear suspension is mounted, because of the constant flexing.

Crash damage is another possibility; even relatively light nudges can distort things. The areas most likely to need attention are the front suspension turrets, steering rack mountings, outriggers and the wishbone mounting brackets. Look for kinks where the chassis gets wider on either side of the sump – also check for cracks, poor-quality plating and uneven tyre wear.

Thanks to its interior being pretty much the same as the TR4’s and TR4A’s, everything is available to revive a tatty TR5 or TR250 interior. High-quality repro parts are readily available and they’re not costly.

It’s the same with the electrics; problems tend to be very straightforward to fix thanks to everything being proprietary. The worst you’re likely to have to contend with is a butchered or brittle loom, but replacements are available.

If the windscreen wipers don’t work properly it could be because the rack is worn, and replacing this means removing the dash for access, but that’s just fiddly rather than difficult.

It’s easy to see why the TR5 and TR250 are so sought after. They look great and are superb to drive, so it’s a shame they were only ever stop-gap models until the TR6 was ready. As a result just 2947 examples of the TR5 were produced, 1161 with right-hand drive; the rest were exported, mainly to Europe.

This compares with 8484 TR250s made, all of which were left-hand drive. Many of those have since returned to their homeland where some have been converted to right-hand drive and/or fuel injection.

The most desirable of the pair is the TR5 because its injected engine produced a healthy 150bhp, whereas the carburetted TR250 was rated at just 104bhp (though measured differently so there's less disparity than it seems). Whatever you buy make sure it’s fitted with overdrive (which was optional on both models) while the Surrey top that was also available improves practicality if you’re aiming to use the car a lot. Which you’re bound to want to do.