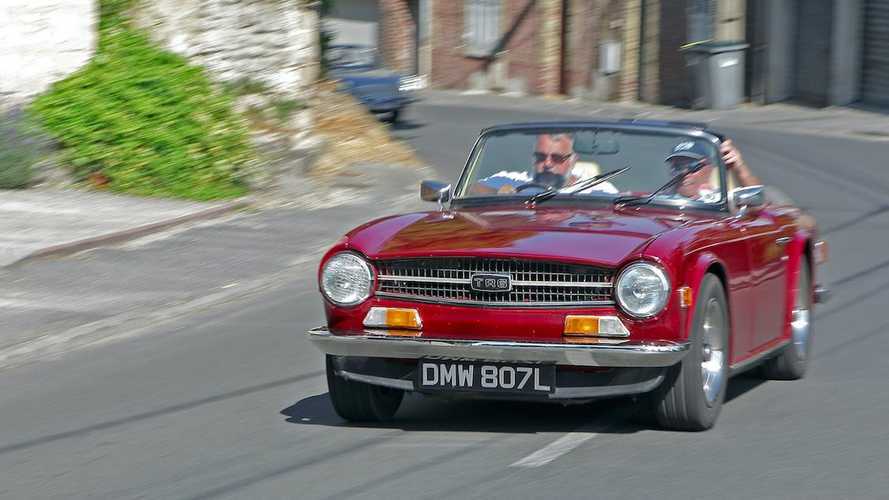 The last of the ‘proper’ Triumph TRs, the TR6 might just be the most accessible of the old-school British bruisers

The classic car market can be very strange, and nowhere is this more obvious than in the world of the Triumph TR. While the most valuable variation on the theme is the TR5, the least valuable (at least of the traditional models) is the TR6. Yet the TR6 is little more than a reskinned TR5, and that makes it something of a bargain.

It’s all down to supply and demand of course; not only is the TR5 the rarest of the breed, but the TR6 is the most numerous. Indeed, the number of TR6s produced (91,850) was more than all of the previous TRs added together.

While TR6 values have increased rapidly in recent years, you still get a lot of hairy-chested classic British sports car for your cash. All cars come with a muscular 2.5-litre six-cylinder engine mated to a four-speed manual gearbox, with or without overdrive.

Created in the same mould as the Big Healey, the TR6 is far cheaper to buy, but it’s every bit as much fun to drive and it’s arguably more usable too, thanks to being a more modern design.

All TR6s were fitted with a 2.5-litre straight-six that’s a long-stroke version of the 2.0-litre unit found in the Vitesse and 2000 saloon. As such it’s torquey and very smooth, and as long as it’s treated to frequent oil changes it’ll happily despatch 150,000 miles or more between rebuilds.

Once a TR6 engine needs a rebuild you can expect the usual symptoms: blue exhaust smoke signifying worn cylinder bores and/or piston rings. Everything is available to rebuild a TR6 engine and it’s not a difficult job; these overhead valve powerplants are pretty conventional.

If there’s a lot of black exhaust smoke the mechanical fuel injection system is set up to run rich, which will accelerate bore wear. It’s worth swapping the original Lucas metering unit for a Bosch item as it’s more reliable and less prone to overheating.

The crankshaft thrust washers can wear to the point that they can fall out, usually scrapping the engine in the process. So push and pull the bottom pulley as someone engages the clutch; if you can feel any movement the washers have fallen out or have worn to the point where they will probably do so.

If there’s much rattling on start up it’ll be because the bearings have been starved of oil through the use of an oil filter without a non-return valve. Spin-on oil filter conversions are cheap and readily available, and any caring owner should have fitted one of these. Expect 50-60psi of oil pressure at 2500rpm once the engine is warm; much less and a rebuild is on the cards.

The TR6’s four-speed manual gearbox isn’t strong enough for the job, so there’s a good chance that it will soon be due for an overhaul. If there’s rumbling in the intermediate gears, but things go quiet once you’re in top, it’s because the layshaft bearings are on their way out.

Clutches aren’t really up to the job either, but don’t be tempted to buy a cheap replacement or you’ll have to renew it within a few months. Universal joints wear, leading to clonks as the drive is taken up, but they’re easily and cheaply replaced.

Not all TR6s got overdrive, but if it is fitted and there are problems it’ll probably be because of a dodgy electrical connection somewhere, a failed relay or a solenoid that needs to be replaced – or the oil level might be too low. An A-Type overdrive was fitted to CP, CC and CR series cars up to commission number CR641 while a J-Type went into CF and CR series cars from CR567.

Wire wheels are a popular fitment. Check for loose or rusty spokes, corroded rims and worn splines; you can check for the latter by jacking up each corner of the car and seeing if there’s any play as you try to rock the wheel top and bottom as the footbrake is applied. Any obvious movement between the wheel and the hub means the splines have worn.

Corrosion can be a big issue but at least pretty much every panel that you’re likely to need is available, much of it from the original tooling. Items such as bonnets, doors (complete or just the skins) and bonnets are available, and prices are reasonable.

Analyse the whole car for rust, including all of the seams and panel faces. Corrosion is common around the headlights and along the wing tops, throughout the inner wings and in the bonnet’s hinge platforms. Also inspect the base of the B-posts, the door bottoms and tops plus the seatbelt mountings.

The sills and floorpans also need careful inspection along with the rear deck, rear wheelarches, spare wheel well and the tail light surrounds, along with the boot lid’s trailing edge.

The separate chassis can also corrode badly, while accident damage isn’t unusual. Lift the bonnet to see the front sections, but everything else needs to be inspected from underneath, with the car on a ramp. The key area to check for rot is just ahead of the rear wheels, between the two bracing plates.

The differential mountings can break away from the chassis if they’re weakened by rust – especially if the car has been driven hard. Cracks can also appear in the front lower wishbone and steering rack mountings; kits are available to strengthen these areas.

There’s nothing that should faze you with the interior trim as it’s all available new. Seats, trim panels, carpet and replacement soft tops can all be sourced, along with wooden dash panels.

It’s much the same with the electrical system, which is made up of proprietary Lucas parts, so everything is available. The wiring goes brittle and connectors fail to connect, but fresh looms are easily sourced along with light units, switchgear and gauges. However, replacement often isn’t needed; cleaning or refurbishment is sometimes possible.

Everybody wants an early TR6 as these featured a 150bhp engine (CP commission number prefix); later models were downgraded to 125bhp (CR prefix). They were actually measured to different standards, so the real-world difference is less pronounced. Just 10% of the TR6s built packed 150bhp while 5% had a 125bhp unit; the other 85% were US-spec cars on carburettors (CC and CF numbers), with barely any more power than the original TR2.

Naturally you’ll want the most powerful TR6 you can find, but what will make it more usable is a decent transmission, so make sure it’s got overdrive. The earlier cars got overdrive on all ratios apart from first; the J-Type unit fitted from late 1972 cut in only on third and fourth.

If you’re buying a car that’s been imported from the US it will have a lower final drive ratio than a non-US car (3.71:1 compared with 3.45:1). The higher ratio is better for more relaxed cruising and makes a significant difference to the fuel economy as a result.

Also, if you’re buying a TR6 for year-round use, try to find one with a hard top. While it’s something else to rust and it’s too heavy to lift on and off without two people handy, it does improve the usability of the TR6 noticeably.