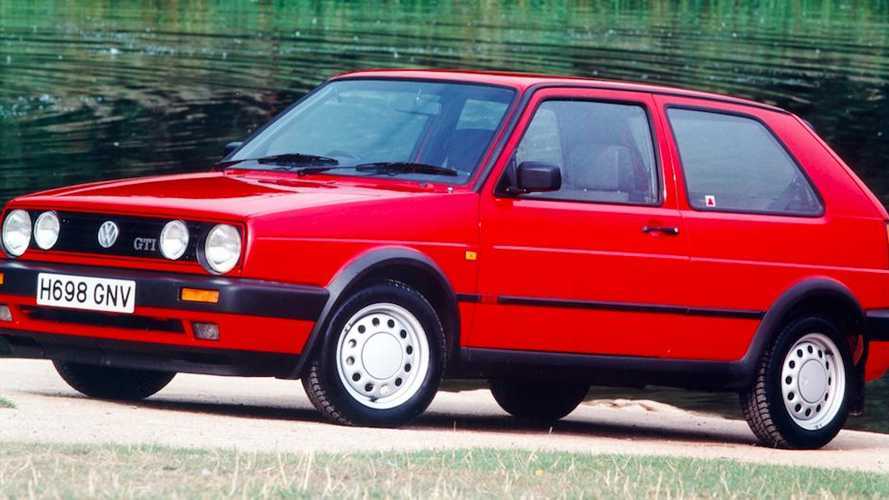 The original Volkswagen Golf GTi is a brilliant car, but the second take on the formula is even better

Volkswagen wasn’t the first car maker to make a hot hatch, but it was the company that took the genre into the mainstream. Its original Golf GTi was a landmark there’s no denying, but as a first attempt there was room for improvement. Recognising this fact, the Golf Mk2 GTi was an even better car and it’s the one that we reckon you should go for – not least of all because things went downhill for quite a while after this generation.

While the Golf GTi Mk1 was quick, practical and great to drive, its brakes were weak and the compact bodyshell meant interior space was at a premium. The Mk2 fixed these problems with a bodyshell that was two inches wider, seven inches longer and the wheelbase was also stretched by two inches. While the weight went up by 10%, the new car was far more aerodynamic than its predecessor (0.34 vs 0.42) and there were now disc brakes all round. With longer travel suspension to improve ride comfort and better rustproofing it’s easy to see why the Mk2 GTi is more usable than its predecessor – but will it ever become quite so collectible?

The 1781cc engine in all Mk2 Golf GTis is tough, but after 100,000 miles the valve guides wear, leading to oil being burned; a head rebuild fixes things. Post-1988 cars can suffer from an inability to idle properly, when the idle stabilisation valve throws a wobbly; the same symptom can be caused by an air leak in the rubber intake boot, which perishes and cracks.

The oil pump on 8-valve GTis is weak; replacing it every 100,000 miles is a worthwhile precaution, because if it fails the engine will be trashed. The 16-valve engine features a much stronger pump, based on the one fitted to the diesel engine. Unless there’s proof it’s been replaced within the last 25,000 miles, fit a new cambelt.

There are two fuel pumps, and both can cause problems. The lift pump, inside the tank, fails and leads to fuel starvation. Things can be masked by keeping the tank brimmed, so be wary if the gauge shows it’s full, but it’s no big deal anyway as replacement is cheap and easy.

The main fuel pump is just ahead of the offside rear wheel. It tends to be noisy but more of a problem is a 16v pump that’s leaking as the parts are costly to fix it, the retaining bolts seize up making the job long-winded, and there are numerous points from which the fuel can leak.

Second-gear synchro can wear quickly on cars used around town a lot, so listen for a crunch, especially when cold. Once the rings have started to wear they won’t deteriorate, so if you can live with it you can save yourself some cash. While it’s best to get things fixed, if it’s better when warm, it’s no hardship to live with it.

Oil seeping from the gearbox is more of a problem as it means a rebuild is required if the transmission isn’t to self-destruct. The first sign of problems will be a very noisy top gear or popping out of fifth, as this is the first ratio to run dry.

Rear-wheel steering stems from perished rear axle location bushes. These form the pivot point for the rear suspension; when they wear out, knocks from the rear suspension result, with the steering effect only coming into play once things have got really bad.

The rear calipers are prone to seizing. Freeing everything off is easy but if things have got really bad you might have to fit reconditioned calipers. You can fit Golf Mk3 calipers to cars built from 1988, which don’t seize as readily, or Mk4 calipers can be fitted with minor modifications.

The Mk2 Golf was very well rustproofed but you still need to check for corrosion in the wheelarches, sills, rear panel seams and the nose panels. Mud can accumulate in the lower front section of the front wings just behind the bumper, so they dissolve behind the plastic wheelarch trims.

Corrosion can also strike around the tailgate handle (which holds the number plate lamps) and the rear wiper spindle. Door bottoms rust and so do the base of the A-pillars; open the doors and take a close look as repairs here are complicated. It can spread to the windscreen frame; if the windscreen cracks due to excessive flexing it’s usually terminal. Other areas to check include the wiper spindle blank on post-1988 cars and the tailgate wiring holes.

There’s also the spectre of crash damage to contend with. The front suspension turrets should be uncreased, the engine bay seam sealer undisturbed while the slam panel and its retaining bolts should be matt black if the car is original. Factory original wings will have a smudge of sealer between their rearmost bolts, designed to channel the water into the bulkhead’s drain holes; these are rarely replicated by bodyshops. New wings aren’t necessarily a bad thing, but careful inspection of the inner wing and chassis leg is essential.

If the rear panel is unmolested it will still sport its factory-applied build sticker on its inside face, visible from within the boot. Open the tailgate and carefully inspect the quarter panel seams; each side should feature the same smooth seam sealer from the roof area down to the rear light. If suspicions are aroused, check behind the side trims of the luggage compartment for evidence of repairs.

The interior trim is generally hard-wearing, but problems can arise from water leaks into the cabin. The culprit is normally the plastic membranes in the door; they’re often disturbed when broken windows are replaced. The leaks lead to damp carpets and water stains on the door cards. If left, condensation will get everywhere, wreaking havoc.

If the interior is tatty because the car hasn’t been kept clean, or it’s had holes cut in for speakers, you’ll struggle to find good replacement panels or seats. The headlining can also cause problems, as the outer fabric can become detached from its foam backing, leading to it sagging.

The electrical system is pretty straightforward and reliable, but the Golf’s aerodynamics lead to dirt being sucked into the rear wiper mechanism, so it seizes up. It’s easy to clean it up and lubricate it though. The thermal fuse on the heater switch resistor pack fails, so the first and second speed settings pack up (there are three), but again it’s an easy fix.

On post-1990 cars and usually only the 8v, if the revcounter doesn’t work, the multi-function computer is probably damaged too – possibly from the car being jump started incorrectly, leading to a power surge. The cheapest solution is to source a working secondhand unit.

If you want performance, practicality and strength in one affordable package, few cars can deliver like the Mk2 Golf GTi. Less rust-prone than its predecessor, so with a much better survival rate, the Mk2 GTi is also eminently tunable for those who want even more go.

While the big-bumper 16-valve GTi used to be seen as the pick of the bunch, things aren’t quite so clear cut any more. Not only does the 8-valve engine have more low-down torque, but these simpler powerplants are inherently more reliable too – they’ll happily clock up 200,000 miles between rebuilds compared with 150,000 miles for the 16-valve unit. As a result, the 1992 model year 8v ‘run-out’ model which looks like a 16v is the best real-world choice.

The reality will probably be that you’ll buy whatever you can find, because as values increase, really good examples of the Mk2 GTi get snapped up quickly. Remove the neglected and modified cars from the equation and there aren’t that many to go round...