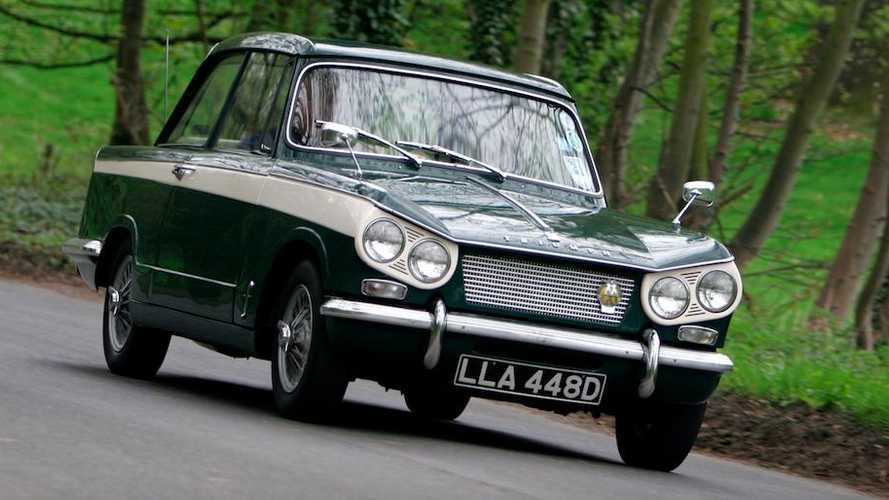 Easy to work on, great fun to own and eminently usable, the Triumph Vitesse also offers charm at low prices, making it an ideal classic

The Triumph Herald makes a great starter classic, but if you want something with more go you’re into the realms of having to resort to significant modifications – or you could simply buy one of the six-cylinder editions, marketed as the Vitesse.

Retaining all of the charm and usability of its four-cylinder smaller brother, the Vitesse packs an ultra-smooth straight-six that makes long-distance drives much more relaxing. While prices have been creeping up in recent years, the Vitesse saloon still represents cracking value and while the open-topped versions are more valuable, you still get a lot for your money. Even better, the Vitesse is a genuine four-seater for the family.

Whereas Triumph offered coupé and estate versions of the Herald, these bodystyles weren’t offered in Vitesse form. However, the Meccano-like nature of these cars means it’s not hard to create your own if you fancy it. That kit-like construction also means that if you can’t run to a convertible you can just buy a saloon and unbolt the roof; the car’s separate chassis makes this viable although you should tell your insurance company first.

Triumph’s straight-six is smooth and torquey but it’s prone to oil leaks, and rattles when starting – although these can be engineered out easily enough. The original canister type of oil filter starves the main bearings of lubricant as the engine is turned over; the secret is to convert to a modern spin-on filter.

The crankshaft thrust washers wear and if they drop out the engine will be wrecked. To check they’re not on their way out push and pull on the bottom pulley as someone presses in the clutch. If there’s any detectable movement the thrust washers may have dropped out, but if they’re still in place they can be replaced with oversized items, with the engine in situ.

A simple overhead-valve engine, the Vitesse’s straight-six is easily rebuilt at home, but parts are scarce for the 1600 edition. Stick with the 2.0-litre models and you should be able to get everything you need.

The Vitesse’s transmission is its weakest area. Any rumbling or whining from the gearbox suggests it’s ready for a rebuild; exchange units are available. More likely to give problems though is the Herald-derived diff, which can struggle to cope with the torque. If it’s wailing like a banshee it’s due for a rebuild; again, exchange units are available.

Clonks when manoeuvring back and forth points to worn universal joints, but they’re easily and cheaply replaced. More costly to fix are the rotoflex couplings fitted to the driveshafts of the 2-litre Mk2. Cheap replacements won’t last long but decent Metalastik items can be sourced although even these rarely last more than 35,000 miles. Alternatively, it’s possible to convert to solid driveshafts with CV joints.

If the gearchange is really vague it will be down to worn plastic bushes in the remote gearchange mechanism. New bushes are available cheaply – and they’re easily fitted.

Most Vitesses have overdrive; quite a few have been converted since leaving the factory. It’s well worth having and it tends to be reliable. Any problems with it are usually down to a faulty electrical connection or it might be that the internal filter needs to be cleaned – or it could simply be that the gearbox oil level is low.

The double-wishbone front suspension can suffer from worn nylon bushes in the brass trunnions while the trunnions themselves wear if not lubricated regularly. The rubber suspension bushes perish, but rubber or polyurethane replacements are available. The anti-roll bar links eventually break and the rubber steering rack mounts perish after being soaked in leaked engine oil.

The rear wheelbearings act directly on the driveshaft, so once they start to wear action must be taken or the halfshaft will have to be replaced along with the bearings. If the car is sitting low at the back it’s because the transverse leaf spring is sagging; the top of the wheel shouldn’t have disappeared above the wheelarch.

A Vitesse’s strength is in its chassis; the sills on a Vitesse aren’t structural. Focus on the main chassis rails, especially around the diff, while the outriggers need to be in good condition too. Replacing outriggers properly means removing the bodyshell – and often that isn’t done because it’s such a big task.

While the bodywork isn’t structural you still need to check it for rot. See if the floorpans are holed and ensure the door bottoms are intact. On saloons the rain gutters rust away while all Vitesses are prone to corrosion in the front valance, spare wheel well and in the lower corners of the bonnet.

Quite a lot of panels are available but they’re all repro and they tend to need some fettling to make them fit. Even if the car hasn’t been restored the panel fit can be poor because getting everything to line up is so involved. There are three basic sections (rear tub, bulkhead and bonnet/front wings) and if one of these hasn’t been properly aligned on the chassis, nothing will ever fit properly.

The trim is hard-wearing but if it’s damaged there’s plenty of high-quality repro stuff that’s readily available. If the dashboard or its surround is damaged it’s not hard to source a decent used dash, but transferring everything over is quite an involved job.

The electrics are normally reliable; if there are any problems it will probably be down to a poor earth or a connection failure in the wiring loom. As a result it’s easy enough to fix, with complete new looms available if you need one.

There are six different permutations and combinations of Vitesse to choose between. There were three different types (1600, 2-litre Mk1, 2-litre Mk2) and each of these was available as either a saloon of convertible.

The 1600 has become more collectible because it’s the earliest of the type, but they are scarce, engine parts are hard to find and they don’t offer any more performance than a mildly tuned Herald. But the super-smooth six-cylinder is still a lot smoother than any Herald engine.

This leaves the 2-litre models and unsurprisingly it’s the Mk2 that most people want because it’s the most powerful and the rear suspension is less wayward than the earlier models' solid swing axle set-up. With a bit of tuning either 2-litre engine can be made very perky although these engines are more about low-down muscle than high-end power.

The convertible offers year-round fun if you track down one of the various hard tops offered over the years (all made independently of Triumph), but open-topped cars are more costly than saloons. Whatever you buy it’s worth having overdrive as it makes long-distance drives far more relaxed. Conversions are available but you have to swap the gearbox for one fitted with overdrive and you’ll also have to fit a shorter propshaft. Doing all this means the cost adds up, but it does ensure that the Vitesse is that much more usable.

On this note, sympathetic modifications are a sign of a cherished car so look out for electronic ignition, halogen headlights and a Kenlowe fan. All of these things are worth having as they combine to make a great car even better.