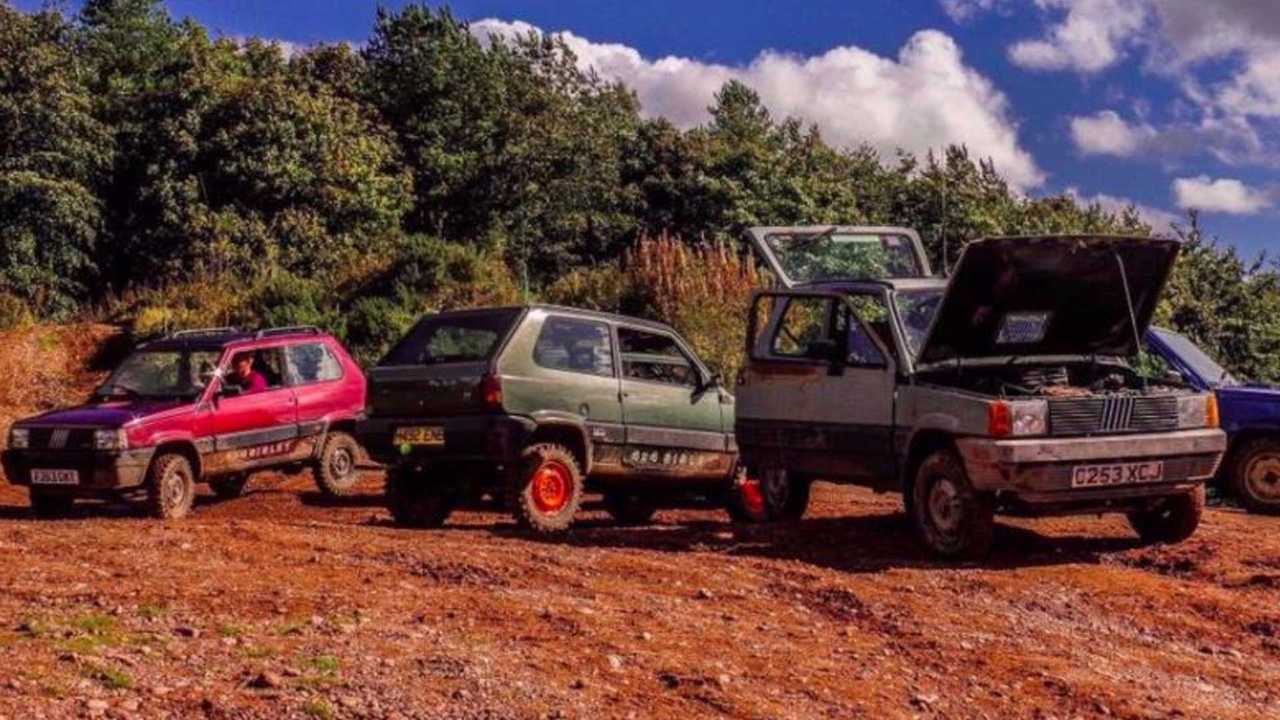 Chic and simple, the original Panda 4x4 is an emerging classic star. Here’s what to look for when taking the plunge

This guide covers the MkI/MkII Panda 4x4. The new Panda from 2003 onwards is not included.

When the Fiat Panda 4x4 was launched in 1983, it was the first small, transverse-engined production car to have a four-wheel-drive system. Developed by Steyr-Puch of Austria, and far from being a gimmick, the original Panda 4x4 remains a serious off-road tool. You may expect a howl of derision from off-road folk, but these models have serious mud-plugging abilities and are always treated with respect by those in the know.

Of course, these days, almost everything has an ‘all-wheel-drive’ option. However, not many such cars are capable of tackling the extreme off-road tracks that the Panda 4x4 can traverse – and even fewer small hatchbacks at this price can offer such practicality.

The great thing about a Panda 4x4 is that they can take you anywhere. They are still relied on by Alpine farmers who refuse to sell them, and you’ll always find a battered example or two at the top of any Italian mountain. Later MkIII (and current MkIV) versions have proven excellent in the rough stuff, but for sheer driving pleasure and plucky off-road charm, nothing touches the original MkI and MkII models.

The later, fuel-injected Panda 4x4 model was not imported to the UK. There are a few left-hand-drive ones over here now, but you are unlikely to find one easily. The engine shares its basic characteristics with the earlier 999cc engine, being a FIRE-based unit.

The earliest Panda 4x4s with the 965cc engine are very rare, and again, you are unlikely to find one easily (these are identified by corrugated panels and front quarterlights). The engine is based on the Autobianchi A112 motor, which was effectively a re-bored Fiat 127 903cc. The roots go back to the 1960s Fiat 850, so it is a well proven but basic design.

These overhead-valve engines do get noisy with age and abuse, yet they rarely fail. Timing chains may need replacing, but this is straightforward. Although the engine does suffer from ‘mayonnaise’ in the oil-filler cap, this is usually due to a lack of use or short journeys where condensation builds up. It is not usually a sign of head-gasket failure, so don’t assume the worst.

Far and away the most common Panda 4x4 uses the 999cc single-overhead-cam FIRE engine. These are well known to be almost bulletproof, and unless seriously abused can cover impressive mileages – many are known to have done over 300,000 miles, often in the ‘tender care’ of hilltop farmers.

Best advice on a 999cc FIRE engine is not to worry too much, but they do like regular oil changes. Mileage is not an issue (my own 135,000-mile Sisley still does its claimed top speed… eventually, and rather noisily). High-mileage cars may use some oil – and they quite normally drip it, too – but changes are easy for the home mechanic thanks to excellent access to the filter. Cambelt swaps are due every five or six years in theory, but most Panda fans don’t bother. The 999cc FIRE is a non-interference engine, and you merely need to put on a new belt if anything should unexpectedly go boing.

Many Pandas have been scrapped or had an engine upgrade (the MkI Punto is the favourite donor), and the 999cc was also used in Unos. This – along with the fact that you really have to drown these motors or run them without any oil for a while in order to kill one in normal use – means there are currently plenty of used engines available. About £50 will buy you a replacement if it’s needed. Experts will happily convert your Panda, or put a used motor in for you. The 4x4 did use a different cam, meaning that you may need to swap these over to regain your 50bhp (later 2WD Pandas also had this cam).

Engine mounts can fail with age, but it’s not a difficult job for any decent mechanic.

You will be looking at a five-speed manual gearbox in any Panda 4x4. These are generally tough, although the revised ones in late models (1992 onwards) can become obstructive.

You will probably find that the five-speed gearbox crunches if you’re slightly ham fisted, especially on the 999cc FIRE cars. The synchro wears badly, even on low-mileage examples; this is usually seen first on third gear, but it can also happen on fourth and second gears. The cars continue like this indefinitely (mine has been crunching for eight years without getting worse), and a sympathetic driver can usually avoid it unless rushing the gearchange. Replacement boxes are readily available from scrapped cars, though, should it get unbearable.

The linkage is often sloppy, and manifests itself by the need to move the gearlever several counties left/right, and an inability to change ratio without knowing your passenger well. This can be fixed by tightening things up, or welding up the offending parts. There is a huge amount of knowledge in the online Panda groups, and many people who will guide you through it (I got a mechanic to do it, and his £50 fix has lasted eight years).

Noisy gearbox bearings are common, but again the transmission will continue like this indefinitely before causing further problems.

Austrian expert Steyr-Puch developed the 4x4 drivetrain. This is a simple mechanical system, which has proven to be robust and staggeringly effective. The car usually runs in normal front-wheel drive (so apart from a weight penalty, this model is just as practical and easy to use as any other Panda).

When the going gets tough, you pull a lever to engage the rear wheels (a satisfying mechanical ‘clunk’ and an orange dashboard light let you know). It’s a system that can ‘wind up’ the transmission if used on firm surfaces, and it commonly refuses to come out of 4WD afterwards; this is not a fault with the mechanicals, and a simple forward-and-backwards manoeuvre usually sorts it out.

Propshaft joints can wear, as well as rubber mountings breaking. This is probably a job for a mechanic, but nothing too difficult to cure.

There is nothing too worrying here. Brakes are never up to modern standards, but with a good shove they should stop the light car quickly and in a straight line. The handbrake is generally useless – these can be set up properly with patience, but rarely are. Instead, Panda owners park in gear (which also stops the rear brakes from binding).

Rear leaf springs can break. The Panda 4x4 did not receive the ‘Omega’ suspension when the MkII was launched, so they will all have cart springs at the back. The good news is that these can be easily fixed by a spring manufacturer.

Brake and suspension parts are all readily available, so nothing will be difficult to source.

If you know Pandas – or anything from the 1980s – you will expect rust. This can be severe, and it happens almost everywhere.

Panels are generally difficult to source new, and passenger (LH) doors have been unavailable for years. The doors all rot at the bottom, and a car with no door rust is rare. These can be fixed, even if new metal has to be welded in, or panels can be found on auction sites. New wings (front and rear), bonnets and even tailgates do pop up, but you may need to be patient.

Much more serious is what’s going on underneath, and you can’t always see the extent of this until you start work on the visible bits. Sills go along their whole length, rear chassis rails around the leaf-spring hangers, boot floor and crossmember, and front inner wings and crossmember are the worst areas.

Many cars have had poor-quality MoT repairs, and can be seriously compromised despite appearances. Just because it has an MoT, doesn’t mean it’s solid. A full specialist rebuild underneath can easily cost £3000, so you do need to look carefully and take an expert if you don’t think you can judge it.

It’s usual for windscreen scuttles to rot, and this may be the cause of water in the front footwells (check whether the carpet feels damp). This is a tricky repair as it gets more extensive when the glass is removed, so don’t ignore those bubbles under the screen.

Fuel tanks are very difficult to obtain for the 999cc FIRE versions. Most for sale are for injected cars (which weren’t sold in the UK), and have an oval hole – the round-hole ones can be found in Italy but are expensive (expect to pay £300 delivered). Most people will mend the original or try to find a used one. The 4x4 used a metal tank, unlike the plastic one on 2WD versions, so you can’t substitute those.

If the car has bigger wheels (they should be 145R13), these may have broken the filler pipe (you need to protect it if fitting bigger tyres). These are unobtainable generally, although Panda folk try to help each other out with used parts.

Not much to worry about here. It’s likely to be dirty, possibly ripped, and some of the plastics may be broken. It’s all simple enough, however, and interiors from non-4x4 cars can be fitted easily. To be honest, though, you’re going off-road – do you really want perfection? Anything broken will be easy to fit, but you will have to rely on used parts as very little is available new.

The desirable ‘twin-sunny’ versions with two fabric folding sunroof panels are generally watertight. They tend to look tatty with age, but the good news is that replacements are available from Italy for around £60.

Electrics are simple, and almost every fault will be due to an earthing issue. Check the battery connections are tight, and clean your hedgehogs (the spiky earth connector blocks under the bonnet) – this will solve nearly everything.

The Panda 4x4 has carved out an enviable reputation over the years, and is actually a serious 4x4 tool in the right hands. Many have been modified now, and issues of ground clearance have been resolved by using lift kits and bigger tyres (protect those fuel-filler pipes, though).

The smallest, cheapest, most cost-effective off-roader? If recent interest and price rises are anything to go by, it just may be. They are still affordable, but the best ones have gone from under £1000 around six years ago, to £4000 now – prices are still increasing, so is it time to buy?

The MkII Panda with the excellent 999cc FIRE engine is more plentiful, and also the best to go for. Our choice is the Sisley special edition with metallic paint, and who wouldn’t want an illuminated Pandometer showing what angle you’ve reached? Prices for Sisley models are about £500 more than other car for excellent examples, and we think these will continue to command a significant premium.

Rust, rust and more rust! You need to check the extent of this carefully, as value depends on condition. Best advice from an expert is ‘Get the most solid one you can; everything else is relatively easy to sort’. We can’t disagree with this.

The Panda is gaining a cult following, and prices are easing up all the time. There are now thriving owners’ groups providing friendly help, and several model specialists – this is a good sign for the future, and full restorations are being undertaken. The Panda 4x4 is a fair bet for a future investment, but can you resist taking it off for some extreme off-roading?