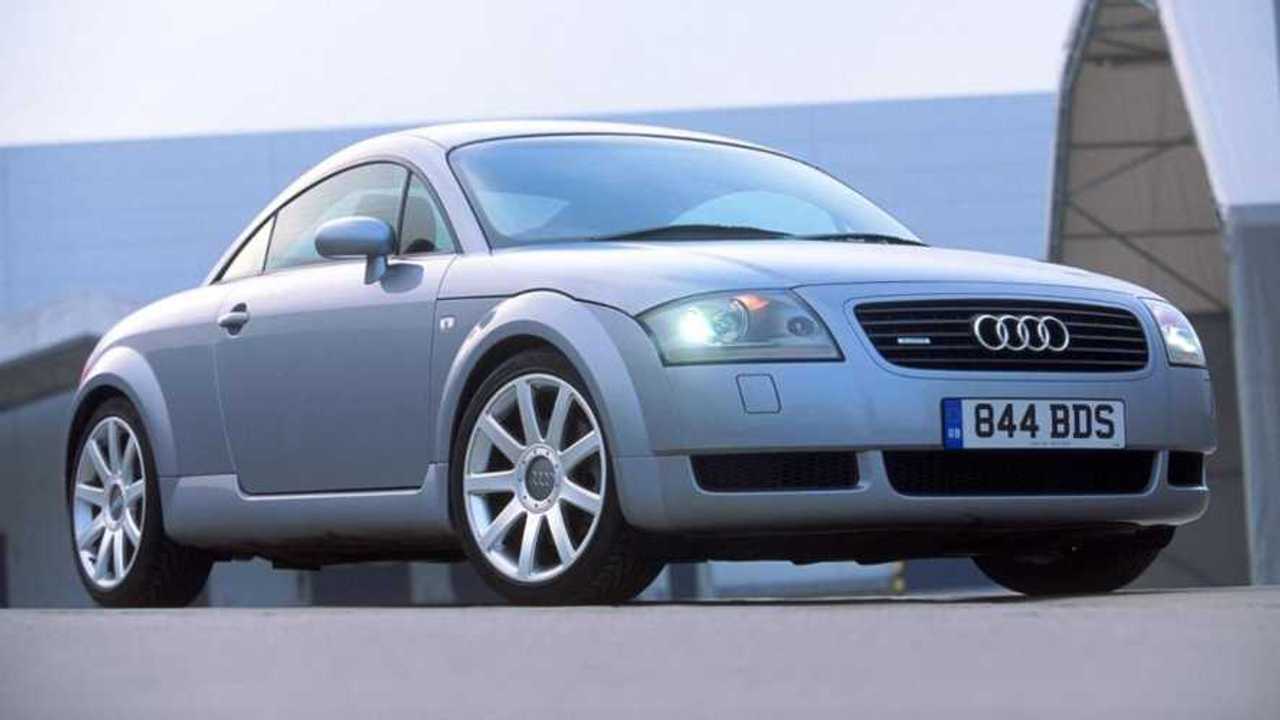 The Audi TT Mk1 (1998-2006) was revolutionary in style and exhilarating to drive, but you must choose with care to avoid pitfalls and financial headaches. Here’s how to bag the best

As one of the main trendsetters from the 1990s, the original Audi TT still looks modern in contemporary traffic. It was first seen in 1995 as a VW Group California studio design concept, and when it started production during 1998 in Gyor, Hungary, the world instantly fell in love with its curvy looks and punchy drivetrain. Despite being slurred by association with orange estate agents and hairdressers with attitude, the German 2+2 Coupé and Roadster set the ‘boutique’ auto scene before the new Mini and its ilk even graced the stage.

The TT shared its platform with its Audi A3 stablemate, as well as its New Beetle and Golf Mk4 cousins from Volkswagen. This offered balanced and responsive steering aided by minimal overhangs. The Quattro four-wheel-drive system and selection of engines only added to the sure-footed appeal of a mechanical package that complemented the design. Audi’s Quattro set-up was standard on the 225bhp model, and available as an option for lesser-spec versions. Early concerns over stability at motorway speeds would see a timely recall to add a rear spoiler, ESP stability system and revised suspension.

Towards the end of production, the latecomer 150bhp and 180bhp ‘budget model’ engines were upped to 163bhp and 190bhp respectively. For 2005, the TT Quattro Sport lost 75kg of weight by replacing the rear seats with a strengthened strut brace. Meanwhile, the 1.8T’s four-cylinder engine was beefed up to 240bhp, while the interior received Recaro bucket seats and Alcantara trim.

Looking for sheer driving pleasure? The TT Quattro Sport is the one to seek out. If you’re simply happy with retro looks on a budget, any base model will provide enough charm to leave you smiling from ear to ear.

The TT’s transversely mounted engines were shared with other models across the VW Group, so reliability and parts supply should remain unrivalled and largely accessible to any Mk1 owner. Differences included a larger turbo and additional intercooler on the most attractive proposition from the range, the 225bhp 1.8T. As with any turbocharged engine, check the service history for work carried out. While test driving the car, look for smoke and power loss under acceleration.

Motors are generally strong, but do examine the engine bay for gasket oil leaks. Misfires and hesitancy on acceleration may be due to a common issue with ignition coil failure on the 1.8T engines. If these problems persist, the MAF sensor will be in need of replacement.

The timing belt, tensioner and water pump should have been replaced at around 60,000 miles. Audi recommends 80,000 miles for the change, but failures have been recorded earlier than this interval. Timing chains on the 3.2 V6 have been known to stretch and disrupt timing. Replacement can be very expensive.

It’s worth noting that many 180bhp models have been interfered with to squeeze out more horsepower. Uprated engine systems and chip-tuned motors can soon wear down the turbo, leading to pricey garage bills.

The VW-sourced transmissions should give confidence in terms of reliability. Manual gearboxes are tough, and clutches can survive up to 100,000 miles.

The complications of the six-speed DSG system on the 3.2 can cause mischief, but the issues are not widespread. However, the age of any vehicle may contribute to unforeseen wear. The DSG ’box allowed for quick gear selection by means of a second clutch; it would pre-select for instant changing. When TV’s Top Gear drove a car equipped with this, it declared: ‘It works!’ and gave it the thumbs-up. However, do check that the DSG is smooth. It may just need a software update if not. The DSG must have new transmission fluid and a filter every 40,000 miles or three years.

DSG heat exchangers have been known to fail. These heat up transmission fluid to align with engine temperature. If any joints fail, coolant could get into the transmission.

Although the TT’s transmission options are generally reliable, some owners have found that the rivets that attach the gear selector forks to the shafts can break. Such breakage might mean a new gearbox. On any of the Quattro models, the Haldex transfer box requires a service every 20,000 miles.

When looking at any used model from the first year of manufacture, ensure that the car had the factory recall and the subsequent fitment of the rear spoiler, ESP stability control and revised suspension. All of the above were fitted on all future TT Mk1 models following the recall.

Where fitted, the Quattro system should add confidence to the TT’s suspension and handling, especially in poor conditions.

Concerns with the anti-roll bar are commonly reported. Plastic collars can fracture, allowing water ingress and problematic movement in the mounts. Check that replacement metal sleeves have been fitted, or add them to your shopping list.

Audi TTs are heavy, and the suspension can suffer significant wear when driven hard, so check carefully and listen for play and knocks and bangs, particularly from wishbones. On very early models the rear swivel joints have been known to seize and break. They may have been changed as part of an Audi recall, or they can be replaced with redesigned rubber versions. A visual inspection of condition should also be made.

The TT’s single-piston, VW-sourced brakes aren’t especially fierce and can be boosted. Improved pads and aftermarket upgrades are plentiful. The stock front brakes can wear quickly, so check the discs and pads.

Panel fit on the Audi TT should be excellent, so any widening gaps may well point to previous accident repairs. Wear and scuffs inside the door shuts also suggest damage and rehung doors. This may indicate that the door cards have been removed at some point, too, again perhaps due to repair work.

Roof rails on the Coupé were notorious for corrosion. You may find rust and bubbling paint, apparently due to a manufacturing issue. Check the sills and lower body for problems, too. Rust on the inner wings behind the front wheels is common, while the shape of the rear quarters makes them prone to parking damage, acquired due to the tail end being a blind-spot. Factor in alloy-wheel damage as part of your purchase deal.

The plastic headlight covers are very prone to scratches and clouding. These can be brought back to an acceptable level through use of a plastic-restoration product.

The Roadster’s soft-top is known to wear across the folds, so it is important to check the condition, as a new fabric roof will be expensive.

The TT’s interior is a late-1990s design classic. There is a lot of head and legroom, and comfortable front seats. Ensure the seat wear and mileage correlate. Most TTs came with a leather interior, and bolsters will most likely be worn and need treating on high-mileage cars. Heated seats were common, so check that all the elements operate correctly. If re-wired poorly, this can be a fire risk.

A ‘baseball-glove’ interior was a rare but stunning option – trim can therefore be difficult to source. The Coupé was a 2+2, however don’t expect the rear seat to be used too often by a human; it is more for occasional seating or as an impromptu parcel shelf. Check for damage to this rear compartment, as heavy items can tear the leather.

Gauges have been known to fail and read erratically. Check for the correct readings, as serious cash can be required to address this problem.

On the convertible Roadsters, thoroughly check the roof operation and the interior for damp, especially the rear carpets. If there’s a musty smell, walk away. Drainage channels within the roof mechanism cavity can easily block, causing excessive wet problems. Meanwhile, items left on the parcel shelf can cause the rear window to be damaged when the top is electrically lowered. On non-Quattro models, the rear boot space is larger due to the lack of Quattro drivetrain.

The TT Mk1 may not be the most respected sports car of its generation, but for enjoyable daily commuting or a country-lane speed run, it offers confidence and reliability even in the harshest of weather conditions. The well proven Quattro four-wheel-drive system, although mainly an option, provides steadfast road manners that remain impressive even compared with more modern rivals.

As a purchase, the 225bhp variant is the most secure investment, with extra power yet similar running costs in terms of insurance and economy.

There are thousands to choose from, with twice as many TTs built as its Porsche Boxster rival. This means prices have been kept low, subdued by a flooded market. The only exception is the limited (800) number of Quattro Sport models.

Watch out for UK road tax; an ’06-plate car may be subject to the higher VED band.