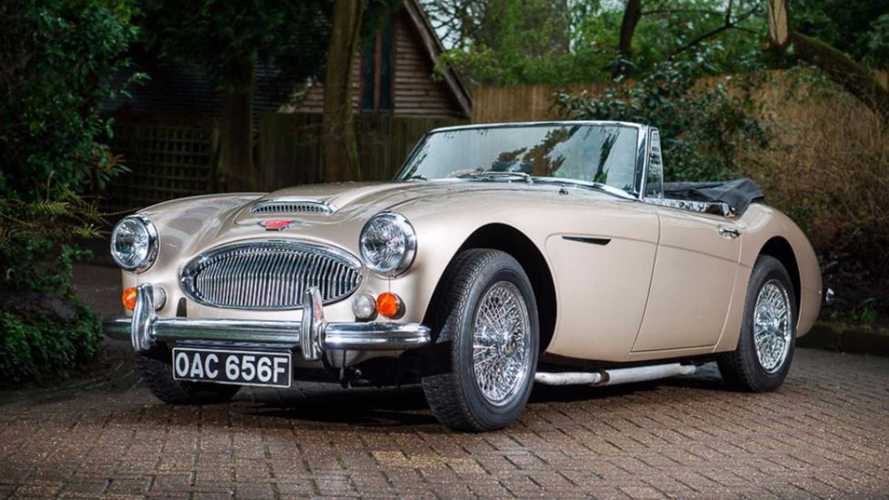 A decent big Healey makes for brilliant driving, and it’s a great investment, too. Yet solid specimens are rarer than you might think; here’s how to find a good one.

For many classic enthusiasts, the big Austin-Healey sums up the great British sports car. The 3000 with its torquey 3.0-litre C-series straight-six is the cream of the crop. Even if the roadster drove like a pig, you’d buy one just for the looks – but, of course, it doesn’t drive like a pig, although the experience could be described as somewhat ‘vintage’.

The heat soak from the exhaust can make the cabin uncomfortably warm, the primitive hood of earlier models is a pain to erect and the steering is heavy. Yet that’s what makes the 3000 so charming and so much fun – it’s not an anodyne experience.

A whole raft of big Healeys were built between 1953 and 1968, but for many enthusiasts the original is far from being the model of choice. For those fans, only the 3000 will do; the Healey that was hurled down forest tracks by Timo Mäkinen, or driven at breakneck speeds by the Morley brothers on events such as the Tulip Rally.

While the Healey 100 was a looker, it was the 3000 that could be driven at 120mph for miles on end (at least in MkIII form), and with its smooth straight-six it had the sort of low-down grunt that lesser sports cars just couldn’t muster. Over the past few years, big Healeys have risen in value to the point where they’re now out of reach for the casual enthusiast. Many are in the hands of collectors, so should you be competing for a slice of the action? We reckon so; here’s how to do it without getting your fingers burned.

All of these Healeys were fitted with a 2912cc straight-six. It’s a truck-derived unit that’s as unstressed as they come, which is why 200,000 miles between rebuilds is a breeze. That’s just as well, because it’s not a cheap powerplant to overhaul.

Coolant weeps between the head and block are par for the course, but it’s possible to modify the waterways to eliminate this. Most owners don’t bother, though; they just keep the coolant level topped up, as the rate of loss is very low. A compression check will highlight any problems, too, while it’s also worth checking that the oil and coolant haven’t mixed.

Oil consumption tends to be quite high; up to 250 miles per pint. On the move, oil pressure should be 45-50psi, dropping to 10-15psi at idle. Overheating isn’t a problem on properly maintained cars, but the waterways can get silted up. If the engine runs hot this is probably why, although incorrectly set ignition timing or a sludged-up radiator will have the same effect.

Because the Healey sits so low, the exhaust gets damaged easily. The 3000 MkIII sits slightly higher, but all big Healeys are susceptible to pipe damage.

All 3000s came with an Austin Westminster-sourced four-speed transmission, with optional overdrive. These gearboxes are tough, but a lack of synchromesh on first gear can lead to worn or missing teeth. If the overdrive isn’t working there’s probably an electrical fault, which should be easy to fix.

Rear axles leak oil, which then seeps from the end of the axle casing onto the brake linings. Replacing the seal is a half-hour job, but if the brake linings and axle need attention, too, things will be more involved.

Front damper mountings can work loose and lever-arm dampers can leak. The cam-and-peg steering box might also be incontinent, but if oiled regularly these don’t need rebuilding – see if the box is running low on oil. If the steering feels loose, the kingpins are probably worn; these should be greased every service.

Make sure the rear springs aren’t sagging, because the ground clearance is tight as it is. If the car is sitting too high at the back, the springs have probably been replaced. Remanufactured springs on BJ8s can take a while to settle, leading to a jacked-up look.

All Healey 3000s got drum brakes at the rear with discs at the front. Only the 3000 MkIII got a servo as standard, but one was optional on the 3000 MkII; they’re worth having, although the anchors are good as they are.

The big Healey’s weak spots are the chassis and bodywork, because of either rust or impact damage (or both). The ladder-frame chassis is simple, but can be damaged with the slightest knock, so see whether the main rails are straight and check the car doesn’t pull to one side with no steering input.

Chassis corrosion is also a problem, especially in the main rails and outriggers. The latter support the sills, and mud thrown up gets trapped between the two, then eats away at both chassis and body.

Beware of bodged chassis and floorpan repairs. Because the floorpans and bulkhead are welded to the chassis, many people won’t effect a proper repair. The bottom nine inches of the car are susceptible to rot, which means floorpans, sills, wings and wheelarches need careful inspection. Inner sills are structural and difficult to repair. These need to be checked from inside the car, but carpeting can make inspection tricky.

The front shroud (around the bonnet, headlamps and grille) is particularly difficult to restore properly, as it consists of several curved alloy sections welded together. It’s not rust-prone, but parking knocks can wreak havoc with the soft shroud; it gets dented just by leaning against it.

The rear section can be the same, and filler is likely to be present – although the single-skinned panels make spotting plod easy. Just lift the bonnet or bootlid, and you’ll be able to immediately see whether there are any big dents that have been filled.

Standard front and rear wings were steel, but replacements are also available in aluminium. Fitting alloy panels reduces corrosion – both electrolytic and water induced – but they get dented easily.

If the swage line that runs from behind the front wheelarch to the rear wing isn’t consistent where it meets or leaves the door, the car has probably been poorly restored. Also, see how well the doors open and shut when the car is jacked up at its rearmost point. The chassis should be strong enough to not flex when subjected to this – if the door gaps close up at all, the chassis is weak.

Re-importing big Healeys from the US has been popular over the years. Although such cars will probably be in good condition bodily, the sun will have taken its toll on the interior. Dash tops and seats are the first to suffer, so make sure these haven’t been poorly repaired.

On many cars, bits of trim are missing because they were left off during restoration. Although most things are available, much of it is expensive. Make sure you add up the cost of replacing these parts before you make an offer.

Off-the-shelf trim kits don’t always fit particularly well, as there are often small differences between one car and another. The only way of trimming a car really well is to tailor all the carpets and panels.

The Austin-Healey 3000 has always been desirable, but in recent years this has led to collectors snapping up many examples and treating them as an investment. This has put further pressure on values, leading to an upward spiral in asking prices.

As a result you now need deep pockets to purchase a really good big Healey, but as long as you buy well these are cars that still represent good value. Not only are they great fun to drive, but the muscular six-cylinder engine also means the 3000 makes a superb long-distance cruiser.

Most 3000 buyers want the later models; the MkIIa and MkIII fetch a premium over the MkI and MkII thanks to their improved weather protection. Examples that have been sympathetically upgraded are also sought after: breathed-on engines, the fitment of overdrive and stronger brakes are all worth having. But even if the car is exactly as it left the factory, it’ll be an absolute blast to own and you’ll love every drive.