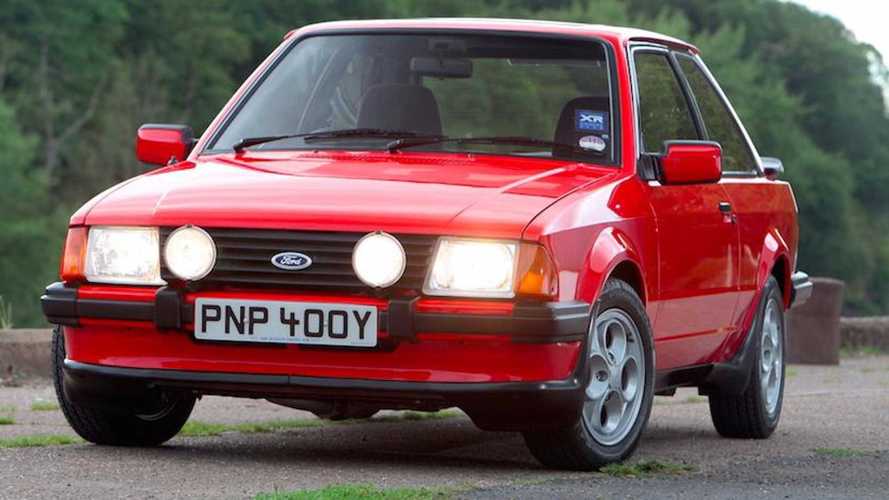 The high-performance versions of the front-wheel drive Escort are becoming ever more valuable. Here’s how to secure a good one.

Ever since Ford’s launch of the first Escort in January 1968, Ford UK has produced performance-enhanced versions of its evergreen family car for the budding rally driver behind every sensible family man. Therefore, when Erika – as the Escort Mk3 was codenamed – went on sale in October 1980, it was inevitable that a go-fast model would be a part of the line-up.

Within a year of the XR3 arriving more than 11,000 had been bought, accounting for over 10 percent of Escort sales. To ensure the success continued, the XR3 was handed to Ford’s Special Vehicle Engineering division; the XR3i was the direct result.

However, before the XR3i was introduced, we also got the RS1600i. With 115bhp, it enjoyed a better power-to-weight ratio than the XR3i, while the suspension featured adjustable tie-bars and an uprated front anti-roll bar. The resultant car wasn’t as composed on the road as an XR3i, but on the track it was a different story. Built to satisfy Group A regulations, initially just 5000 were planned – but the final tally was 8659, 2608 of which were sold in the UK.

The 1596cc overhead-cam four-cylinder CVH engine will rack up 100,000 miles between rebuilds; check for oil being burned on the over-run, thanks to worn valve guides. Head gaskets are a weak spot, so look for signs of white emulsion on the filler cap. Replacement XR3 and XR3i engines are plentiful, but the RS1600i’s cylinder head is unique, and long obsolete.

Ford recommends changing the cambelt every 36,000 miles or three years. If the car you’re looking at hasn’t had a replacement, there’s a good chance the belt will let go – wrecking the engine in the process. It’s worth fitting a new belt as a matter of course.

Fuel-injected engines are fitted with a metering unit that tends to seize, leading to the engine being over-fuelled or running lean. Distributors seem incapable of lasting more than 50,000 miles, and RS1600is have a twin-coil ignition system fitted. The coils are prone to failure (replacements are scarce), so check the car isn’t misfiring, running on two cylinders or refusing to start altogether.

All performance Escort Mk3s have a manual five-speed gearbox – except pre-February 1982 XR3s, which got a four-ratio transmission. Expect 100,000 miles between rebuilds. The gearchange was never very sweet, but if it’s particularly baulky a rebuild is due; the RS1600i’s fifth-gear mechanicals are unobtainable, as they weren’t fitted to any other car. Change linkages and bushes will probably be worn, but replacement is easy and cheap.

Converting a four-speed car to five ratios isn’t as easy as you might think. Because of different engine mounts to relocate the powerplant (the gearboxes are different sizes), you’ll end up having all sorts of problems getting the ancillaries to fit.

The most likely source of problems will be from the clutch, which is often abused. The cable stretches, but they don’t generally snap. The clutch itself will probably be worn; if the car isn’t abused it should give 50,000 miles of service, but only half this if driven hard.

All the clutches are interchangeable across the different cars, but it’s common to install an RS Turbo unit as it’s the strongest that will fit. The parts are easy to source and simple to fit.

The steering rack’s ball joints can break on hard-driven cars, but they’re cheap to replace. More likely are tired suspension bushes front and rear, all of which can be replaced with polyurethane items. There are three on each rear wishbone, along with the ones in the tie bars and anti-roll bars at the rear. The dampers also have bushes fitted top and bottom.

Rear dampers leak but replacements are available – except for the RS1600i. The units for these are bespoke and unobtainable, yet they were made by Koni so it’s possible to have them rebuilt.

The wheel bearings wear quickly, especially if wide wheels have been fitted, but they’re not expensive or tricky to replace. Look for cracks near the track-control arm, which develop if the front wheels are kerbed.

Each model featured a different type of wheel design, most of which were alloys. Many have since been swapped for aftermarket items, and sourcing originals can now be tricky.

Ventilated discs were fitted at the front and drums at the rear – the discs will probably be ready for replacement. A common swap is to fit XR4i or RS Turbo series 2 brakes, which will go straight on. The only other likely brake malady is with the master cylinder, which leaks. Check for signs of fluid escaping.

Crash damage is common, so check the front inner wings for signs of rippling, and the boot floor, too. Look for overspray on the window rubbers, and see how well the panels line up.

Expect plenty of rust, too. The wheelarches dissolve, particularly the rears, and the sills rot badly as there are drain channels leading into them. The drain holes within these block up, and they then rot from the inside out. Also expect corrosion in the door bottoms, the corners of the boot and the front valance.

The outer front wings are laid on top of the inners, allowing water to collect between the two with predictable results. The bulkhead rots behind the heater and the battery tray, and on RS1600i models the brake servo is mounted against the panel work, promoting rot. Other cars used a bracket to keep the unit away from the bodyshell.

Window seals (especially the windscreen) leak, leading to rotten floorpans, while corrosion is common in the tailgate around the rear wiper arm mounting. Sunroof leaks are common, too.

The bodykit can hide a multitude of problems, and can cause them as well. Vibrations between the mouldings and panels cause the paint to be rubbed away – the same problem afflicts the rear bumper, which has a plastic moulding along its length. Once water has crept into the joint, it’s only a matter of time before rust starts.

The cabin trim lasts pretty well, but a lot of these cars have been butchered over the years, and replacing damaged trim panels or seats with original parts isn’t easy. Many trim panels and parcel shelves have had holes cut in them for speakers, while tired seat trim is common. The latter can usually be revived, though.

Look for cracks in the plastic dashboard surround, and holes in the convertible’s fabric roof. The latter can be replaced easily – but the former can’t, as there aren’t enough good parts to go round.

The powered windows (including the switches) are prone to issues, and the electrics can fail altogether. The culprit is a pair of relays that control the power supply, and these live behind the dash. They’re accessed by removing the speaker grille that sits on the dash top – and replacements are scarce.

The ECU can fail. This controls the fuel supply on injected cars, so when it throws a wobbly it will either make the engine run lean or over-fuel the motor and let it run on when the ignition is switched off. Replacements are available (not for the RS1600i), but if necessary the car’s existing unit can be rebuilt.

Some performance Escort Mk3s have become very valuable. If you want a mint, low-mileage car that’s completely original, you’ll now pay plenty for it. Buy a more average example, though, and values are much more palatable – or at least they should be. Many buyers are overly optimistic, so do shop around before committing.

If buying a project, poor parts supply means you shouldn’t take on an RS1600i too readily. Restoring an XR3 or XR3i is a more realistic prospect, but if significant work is needed you might struggle to get your money back. Don’t get carried away and take on a mammoth project too lightly.

You don’t have to settle for a hatchback if you want a hot Escort Mk3, as Karmann also built 60,000 cabriolets. Not all were powered by an injected engine, yet many were. A lot haven’t aged well, but if you can find one it’s the perfect car for those looking for cheap, open-topped fun.