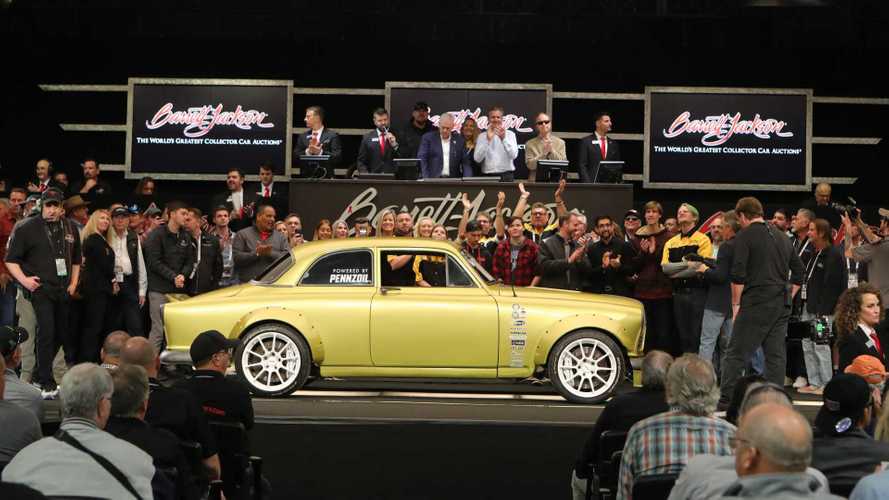 Learn more about the crazy build and the charity its sale benefitted.

Describing a car like Mr. Toad’s Wild Ride to someone who hasn’t seen it can be challenging, to say the least - after all, there’s really nothing quite like it out there. You could say it looks like a Volvo and Chevy Corvette had a wild night together and made a baby, but that’s not quite right, even though that’s kind of what it is in reality. The fact some think at first glance this vehicle is a modified Fiat says it all: this really is one wild ride! Seeing the car in person at Barrett-Jackson Scottsdale was a genuine treat at a place filled with amazing vehicles and worked up bidders looking for rare finds.

Gallery: A Closer Look At The Volvo Amazon Custom Coupe With Jeff Allen

It takes a mad genius like Jeff Allen to come up with a mashup between a 1963 Volvo 122S Amazon and a 2013 Chevrolet Corvette Grand Sport. I had the unique opportunity to speak with the star of CNBC’s The Car Chasers about his unique build before it crossed the block. We also discussed the charity it benefits when sold.

While some might be intimidated by his celebrity status, or towering physical stature, Jeff Allen is an affable guy, down-to-earth, and strikingly genuine. He was eager to explain to me how by chance one day he parked a Chevrolet Corvette next to his Volvo Amazon, causing him to realize the two wheelbases were nearly the same length; that got the gears in his head turning. It would take a little cutting, but as Allen said with a laugh, “That’s what plasma cutters and welding torches are made for, right?” As they say, the rest is history.

At first, Allen was going to use a Corvette ZO6 as a donor, but was convinced by his team that a Grand Sport model was the Chevy for the job, largely thanks to a frame which is easier to chop up and put back together again. From there it was a monumental effort obsessing over getting everything about the car just so, the last details coming down to the wire for the SEMA Show. Anyone who’s worked on a project car knows how your estimates for completing novel jobs like this are never even close to reality, and when you have a looming deadline, the work becomes even more urgent.

Speaking of details, the saying that the devil is in them most definitely rings true. By not leaving the little things to chance, Allen built one amazing vehicle anyone should be proud to drive. Seeing it in person, I was mesmerized, and that’s not easy to do for someone who’s seen so many amazing vehicles as an industry veteran.

For example, the Volvo had a gas filler in the rear fascia, while the Corvette chassis locates the filler on the driver’s side rear quarter panel. Rather than just fill in the hole in the rear fascia as many builders would have, Allen installed a large white reverse light in the blank spot. The result is this already unique car looks that much more special.

The interior has some especially nice touches. At first, I was sure the steering wheel came from a newer Volvo, maybe an S40 or S60, something I felt confident about having owned a few myself. Allen corrected me, explaining it was actually a Corvette steering wheel. What threw me off was how he used a random Volvo badge on the center hub, and amazingly it fit so perfectly the whole thing looked OEM. Being taller, and the doors staying locked while the car was on the floor, I didn’t see at first the headliner was the same yellow and black tartan as the trunk liner, a memorable retro touch inspired by old air-cooled Porsche 911s, explained Allen with glee. Since the 911 was one of my first car crushes, I can definitely respect a man who loves those types of design flourishes.

I had to wonder why would someone build such a vehicle? Yes, it’s awesome and I could tell it was particularly fast by the sinister smile on Allen’s face when I asked him what it was like to drive. But after pouring so many hours into this crazy mashup, I was sure Allen would reply wholeheartedly that it was about making a monstrous Volvo nobody would see coming, the ultimate sleeper supercar killer, or something like that. Instead, his answer really made me think.

“I wanted to show kids these days they don’t need a million dollars and buy a Bugatti or Koenigsegg to have a cool car, because they can build one for less than they think.”

Having experience in car tuning personally, I know firsthand that crazy builds like this can get little love from the purists. Still, there’s a certain pride at driving something which was built, not bought. It reminds me of a quote from Chip Foose I’ve saved, “The biggest crime happening in America is the fact that they’ve pulled all of these shop classes out of schools. Kids today, their dream isn’t to build something, it’s to buy something.”

“Everybody wanted to get involved once they found out I was building a car for charity,” Allen explained.

He pointed out a dizzying number of parts on the car which were donated by different companies, like the massive Forgeline wheels hiding 6-piston BAER brakes. SEMA Garage hooked him up with a custom 3D-printed rear spoiler, since nobody made such a thing for the Volvo Amazon, and secured the beautiful BASF B67 Austin Yellow paint which literally makes the car shine.

Building a car like Mr. Toad’s Wild Ride is always a gamble. As they say, 'no guts no glory.' On top of that, the television star and shop owner said he never does no-reserve auction cars, so the prospect of taking that plunge was obviously anxiety-inducing. Of course, the risk was about how much it would net for charity, not for Allen’s own pocket.

Speaking of which, the benefactor of this auction vehicle was the SEMA Memorial Scholarship Fund. It’s a scholarship many don’t know as much about as they think, and I was one of them. While it does help students with tuition at automotive technician schools, it goes even further. Technically, anyone looking to get involved in the auto industry can apply and potentially be awarded a scholarship for all kinds of schooling, including graduate programs at research universities. It could be for a technical program like engineering or something else which still relates to the industry, such as design or journalism.

SEMA doesn’t just provide money, it also invites scholarship recipients to events like the SEMA Show and introduces them to industry influencers, helping them to make valuable connections as they lay the groundwork for their career. I’d argue that’s even more helpful than the scholarship money, which is still a much-needed boost for many.

Mr. Toad’s Wild Ride gained its first exposure at the 2018 SEMA Show in Las Vegas - from there, it was featured in the Fast and Furious spinoff movie Hobbs & Shaw. I can only hope this isn’t the last we’ve seen of the Volvo-Corvette mashup, because it is one wild ride.